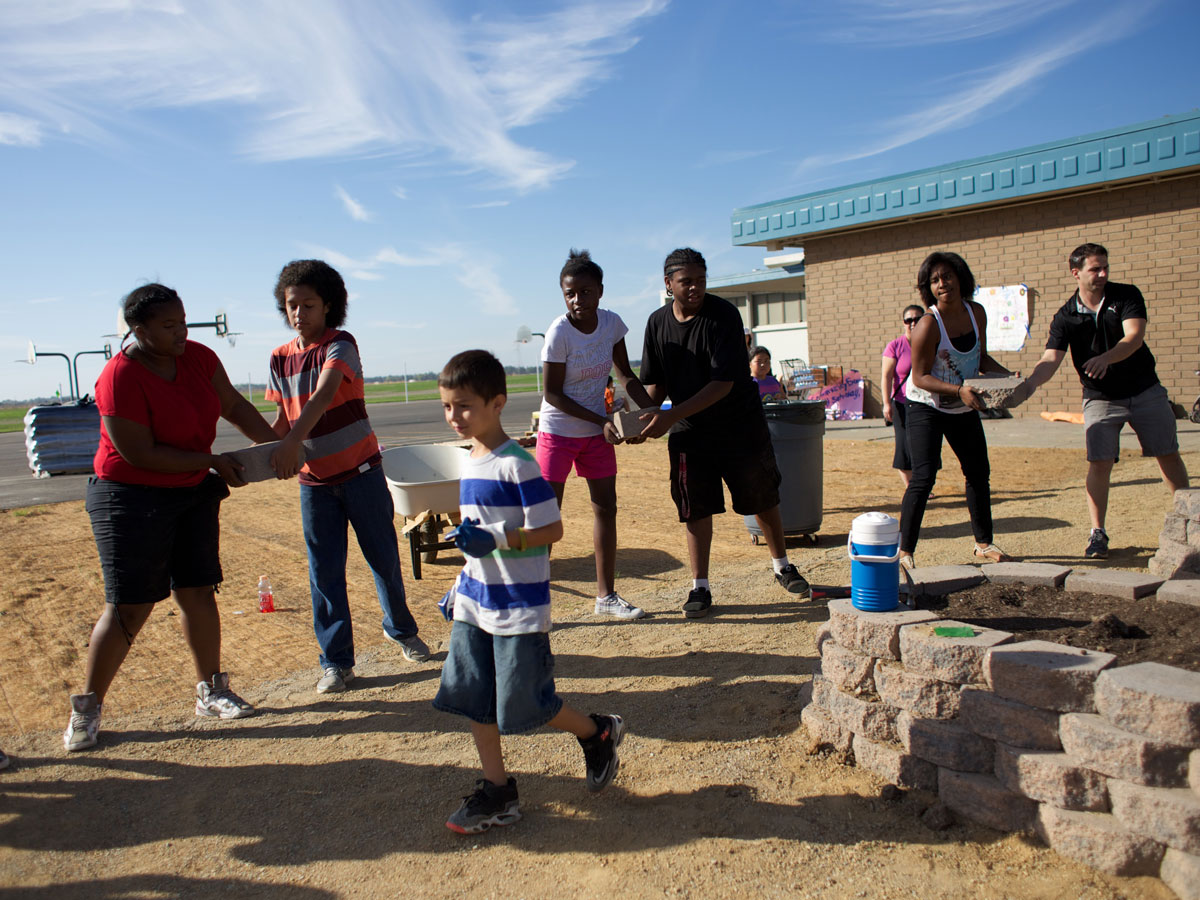 Once a month, in the middle of the night, Erica Johnson heads to the 24-hour WinCo grocery store.

Erica Johnson in front of her Meadowview home.

Johnson doesn’t enjoy grocery shopping at 1 a.m. But she’s raising four children by herself and she doesn’t own a car. That’s a big problem in Meadowview, a neighborhood near the southern edge of Sacramento. The nearest full-service grocery store is three miles from Johnson's house.

Right now, her most reliable transportation option is a neighbor with a van. To work around his schedule, they go late at night.

“I don’t trust too many of my neighbors. I really don’t,” Johnson confides. “So I go grocery shopping with him. And... I let him get a few things for him and his daughter to show my appreciation for the ride. Because I don’t have gas (money) and he knows it. So he’s like, ‘Well, if I can get at least $50 worth...?’ and I’m like, ‘Yeah, as long as you can take me.’”

The closest all-night grocery store is actually eight miles away, in Elk Grove, just south of Sacramento. So it costs Johnson $50 for a 16-mile round trip. At that rate, (and on a food stamps budget), she knows she has a single shot to buy a month’s worth of groceries.

Meadowview lies within Sacramento city limits but doesn’t feel like a part of The City of Trees. It’s an area marked by unbroken stretches of pavement, punctuated by empty lots. Very few trees at all. The Sacramento River is less than three miles from here, but Interstate Highway 5 cuts the area off from the river. The Meadowview area still carries a stigma of gang activity and violence that raged there decades ago.

Along Meadowview road in Sacramento.

What Are They Going To Eat?

Johnson doesn’t dawdle in the aisles of the 24-hour WinCo grocery store. She tracks prices; she knows what her options are. She can tell by eyeballing the groceries in her cart whether she’s going over budget. Johnson estimates she spends $400 a month to feed her family of five. (Plus $50 for transportation.) When she rolls up to the register, she’s pushing two full grocery carts. She hopes to keep $40 on her EBT card to replenish milk and bread from the corner store.

Erica Johnson and her kids make a turkey "dance" while preparing their Thanksgiving meal.

In her kitchen on a weekday afternoon, Johnson thaws a package of frozen chicken drumsticks in the sink. She counts out the pieces -- two for each person.

Johnson mulls over which side dish to add.

“I know it’s going to be chicken and corn with the green beans mixed.”

She accommodates her children’s likes and dislikes as much as she can.

“You know your kids...Benzo, he’s more of a green vegetable person. If he doesn’t have green beans, he’ll pick over the meat or the rice.”

Nineteen-year-old Victoria doesn’t like onions. So when Johnson makes meatloaf, she sneaks in finely diced onion to pass muster. Nine-year-old Kapone is a “meat noodle person” - and he's the one who reads aloud from the ingredient label. Eight-year old Lexus is known as “peanut butter jelly girl." And the mornings are rough, Johnson notes warily, if seven-year-old Benzo doesn't get a warm cup of milk.

Johnson knows how to cook. And her family knows who to call when birthdays roll around.

“I’m the cake maker in the whole family. Me and my mom’s youngest sister - we’re the only two who know how to make cakes that stand up and aren’t falling over!” she says, laughing.

Every meal is about making food last.

“Like a noodle soup,” she explains. “You’re just throwing everything in the kitchen and refrigerator in it.”

Still, Johnson concedes, no matter how much she" stretches,” by the twentieth of the month, her family’s food supply dwindles to very little. Every month.

“When I’m real low on food...I’ll wake up and I’m like ‘Okay, what are they going to eat?’ I have no clue what they’re going to eat,” Johnson admits. “And I sit there and it takes a while to come up with something...I’m like, ‘Okay, guys, here’s the thing. We’re almost out of food, so mom has to compromise.’”

Soon after the start of a new school year, Amaya Weiss unlocks a storage closet on the campus of John Still K-8 School.

There are rows and rows of canned soups, black beans and diced tomatoes inside a giant locker. About 150 cans plus dozens of instant ramen packages are stacked in grocery bags on the floor.

“(These are) things that families can take home to sustain them after their food stamps run out. Or if all they have is a can-opener and a microwave,” explains Weiss.

Weiss is a learning support specialist with Sacramento Unified School District. This is her third year based at John Still K-8 and her eighth year working in public schools in Meadowview. When she talks about the students, parents and siblings who make up this community, she calls them “my families.”

Food sourcing and distribution are not technically part of Weiss' job.

It all began with cheese sticks and granola bars. When she joined John Still’s staff, Weiss describes students coming right up to her, saying, “Miss Amaya, I’m hungry.” That’s when she started stashing snacks in her handbag.

But bags disappear much more quickly than food supplies come in.

Food insecurity is an open secret on a school campus like John Still K-8, where 100 percent of the student body qualify for the free and reduced meal program. There are 970 families at John Still. Weiss says, at last count, 37 of those families were homeless. Talking with students and parents, Weiss discovered many children could not count on consistent weeknight dinners or weekend meals.

Because many children within this school community rely on school breakfast, lunch and “supper snack” for the bulk of their nutrition, Weiss' concerned about any weekend being a gap day in terms of food. Let alone longer vacation breaks.

As a learning support specialist, Weiss works on identifying social, behavioral, emotional and academic obstacles faced by John Still students. She and the school’s social worker then refer students (and parents) to health care and social services for direct assistance.

On a given day, that could mean anything from lining up an emergency dental appointment to reporting possible domestic violence to Child Protective Services. (During one of our interviews, Weiss was pulled away to handle a student needing a suicide risk assessment from the school’s social worker.)

Against that backdrop, Weiss explains, food can easily slip onto the back burner.

“When you’re in chaos and trauma it just becomes less important to eat."

“Hunger gets pushed down and blocked out because you really don’t need to eat," says Weiss. "When you’re in chaos and trauma it just becomes less important to eat. It’s just not the most important conversation. We’re talking about giving counseling services for a child whose parent just got a double life sentence.”

Vernon Gillam grew up in Meadowview. At 27, he’s back in his childhood neighborhood as a basketball coach and after-school program instructor at John Still K-8.

“I didn’t have anyone as fun or as cool as me in my life when I was going to school,” Gillam says, with a smile. “But I always wanted somebody I could talk to and laugh with...a teacher I could play basketball with and look up to.”

Gillam's trying to fill those shoes. He talks about healthy eating with his young athletes. He tries to motivate them by connecting food with their training. But he also admits it’s a stretch to talk about a balanced diet when it’s clear that fresh fruits and vegetables are rarely available at home for these kids.

And he also sees hunger (in this community) running much deeper than the absence of brightly-colored food groups.

“Eighty percent of the kids I’ve talked to do not eat breakfast. And if they do, they might be eating it at school if they get there on time. “‘Breakfast’ is a definitely a thing of the past...in this community.”

Gillam says he’s all for food literacy. He’s thrilled that John Still kids will discover how fruits and vegetables grow in their newly-built school garden. But in general, Gillam sees a need for more opportunities for Meadowview kids to connect with the world outside the three-mile radius of their neighborhood.

Vernon Gillam stands on the overpass that connects Meadowview Road and Pocket Road in Sacramento. He says he can feel the difference between the neighborhoods as he stands there.

Almost every day, Gillam finds himself assuring young people from Meadowview that upward mobility isn’t something that’s only possible “over the bridge”. That’s “neighborhood speak” for what happens when you follow the I-5 overpass out of Meadowview. You land in The Pocket: a green, affluent neighborhood tucked up against a bend in the Sacramento River.

Gillam says Meadowview kids are obviously perceptive about the difference in privilege at the two ends of the bridge.

Amaya Weiss agrees that exposure is key. As she puts it, children need to know they can be from Meadowview and even be hungry and still grow up and be all right. From her perspective, efforts to connect Meadowview families with healthful, affordable food must dovetail with strategies for greater access to healthcare, education and economic opportunities.

Amaya Weiss hosts "open lunch" each Wednesday, a safe place for students to play and hang out free from bullying.

And as modest as it may seem, Weiss views handing out grocery bags as a step in that direction.

“It’s not meant to be a band aid,” explains Weiss. “It’s meant to give you a piece of trust, a piece of me, a piece of what we can offer. I just want that bag to kind of be the beginning of a conversation of ‘where we can go together?’ and how we can get you linked to better resources.”

As for Erica Johnson, she recently applied for a position as a school aide at John Still. She says she’s feeling confident about it. If she gets the job, she plans to move her family to a quieter street.

Johnson adds, “It’ll mean a lot. I’ll be able to get caught up on bills around here.”

Down the road, Johnson hopes to save enough money for a car. Leaving those midnight grocery trips behind her can’t happen a day too soon.