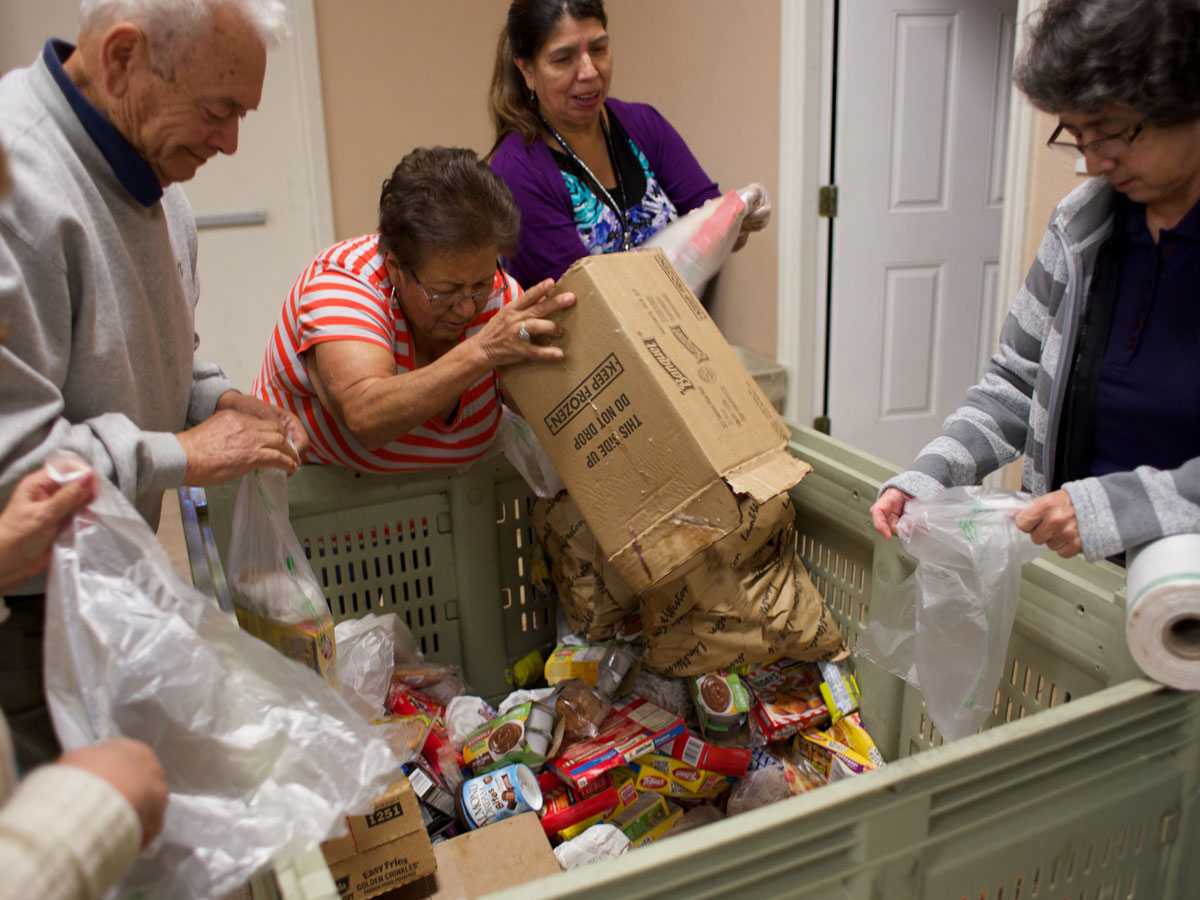 Volunteers at the Ebenezer Christian Center prepare food for distribution. Many volunteers also receive groceries from the food bank.

"The Avenues" as this stretch is informally known, from Fruitridge Road to about 49th Avenue, is a mile of decaying apartment buildings, interspersed with weed-filled empty lots, the occasional car repair place or convenience store. In lots where buildings used to be, you see piles of trash and clothes, mattresses, pink and purple Big Wheels. 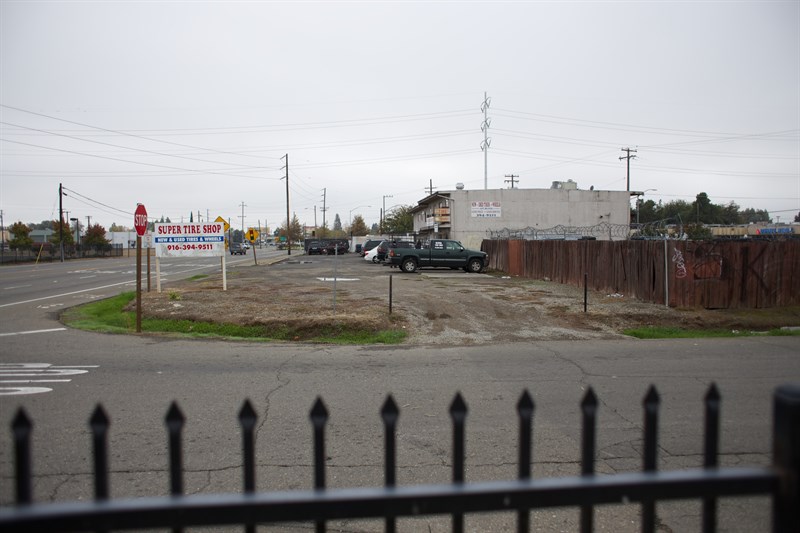 A view from Ebenezer Christian Center in "The Avenues" neighborhood of South Sacramento.

There are about 800 apartment units in this one-mile stretch of MLK.  It was early October when we toured The Avenues. Earlier that morning, Abrego had learned from a local apartment manager that several of the complexes are dealing with bedbug infestations.

On the side streets, many apartment buildings have plywood over windows and doors. We spotted one apartment building behind a high black fence that looked boarded up and abandoned -- except for one unit on the bottom floor where the door was covered with Halloween decorations.

Lost In A Food Desert

The Avenues feels isolated, partly because the neighborhood is criss-crossed by Highway 99, which creates physical barriers to adjacent neighborhoods. But it is isolated in other ways.

"In this immediate area, there is no bank. There’s no library. There’s no grocery store," Abrego explains. Instead, the area is known for the highest rates of gun crime in Sacramento County, and for meth dealing.

The Avenues is not so far from Sacramento’s "Little Saigon" on Stockton Boulevard, which is full of busy restaurants and markets. Little Saigon is about 1.5 miles away.

"It might as well be 20 miles from here," Abrego says, because so many people lack transportation, or the money to eat out.

Abrego came from the East Bay six years ago, to serve as Associate Pastor at Ebenezer Christian Center on 47th Avenue and MLK.  When she arrived, Sacramento was in full-blown mortgage meltdown. She says that for her first 14 weeks on the job, she heard a new story every week of congregants losing their homes and moving away from the neighborhood.

Pastor Karen Abrego is an Associate Pastor at Ebenezer Christian Center in Sacramento. Because of budget cuts last year, she now works for a state lawmaker to pay her bills.

She also noticed that the children in her Sunday school class were fidgety and unfocused. She decided to start giving them a snack before classes. The sounds the kids made wolfing down the pancakes she made reminded her of the sounds she heard from hungry kids when she was doing missionary work in Central America.

"I realized the kids were really food-poor on the weekends," because they weren’t in school, and weren’t getting regular meals, Abrego says.

This moved Abrego to try to build up the church’s "food ministry."

According to the Sacramento Hunger Coalition, more than 17 percent of people in the City of Sacramento can be considered “food insecure,” meaning they are uncertain whether they will be able to get enough nutritious food during the month. The southern half of the city is closer to 19 percent food insecure, likely worse when wealthier neighborhoods like Land Park and Greenhaven are excluded.

“If you don’t have transportation, you’re screwed.”

The Avenues area is designated as a "food desert" by the U.S. Department of Agriculture—meaning people have low incomes and few options for nutritious food. The USDA uses three definitions of food deserts in urban areas: population within a mile of a supermarket, population within a half-mile of a supermarket, and the portion of people with no access to a vehicle. The Avenues meet all three criteria.

"You better have a car," said Debora Fontes, who lives in a house on 44th Avenue, and relies on public transit. "If you don’t have transportation, you’re screwed."

The closest store to her house is an AM-PM market on 47th Avenue, where Fontes says milk can cost about double what it would in a grocery store.

"Stores around here are outrageous," she says.

The closest supermarket, a FoodMaxx discount grocery store, is a mile away on Florin Road.

"When I have bus fare, I’ll take the bus down there," says Fontes.

Sometimes when she doesn’t have fare, she’ll sneak onto the light rail train, risking an expensive citation. Sometimes she will return from shopping on the bus with a dozen grocery bags, and she’ll call her son to walk to the bus stop and help her carry the groceries home.

“Stores around here are outrageous."

Fontes was a home health care worker. She made nearly $2,000 a month, until her own health issues forced her to stop working. Now she pays rent and utilities with her disability check from the state. Her adult son lives with her and he gets $189 worth of food stamps every month. That is the family food budget.

Fontes and her son regularly rely on free food distributions like the one at Abrego’s Ebenezer Church, a 15-minute walk from her house. The food giveaways are scheduled every other Friday at the church, and one Friday a month at Pacific Elementary School on 41st Avenue.

Pastor Karen Abrego prays with a woman who came to get food at Ebenezer Christian Center.

Last month, Ebenezer gave food to 300 families. The distributions are a combination of surplus food from the USDA and donations from Sacramento-area grocery stores. The donation bags typically include pasta or rice, canned vegetables, meat of some kind and when possible, milk. The donations even allow Abrego to give out cakes to people on their birthdays.

The Ebenezer congregation is largely Latino. But the folks who line up for free bags of groceries are Latino, black, white, Southeast Asian and Russian. And the reasons that people rely on Ebenezer for food are as varied as the population. But there are some common themes. Many say that food stamps don’t last the entire month, especially when they are spent at the expensive convenience stores that are numerous in their neighborhoods. 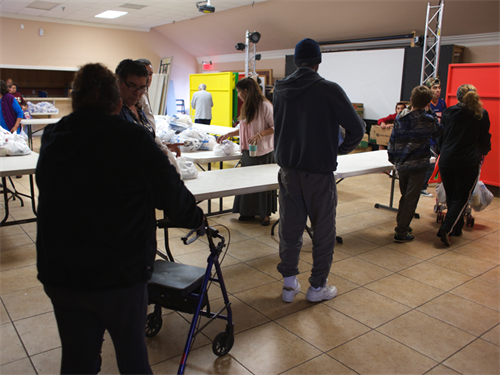 Ebenezer Christian Center distributes food twice a month at the church and once a month at a school in The Avenues.

A recent study commissioned by California Emergency Foodlink found that more than half of its clients ran out of food stamps within two weeks.

Many of the people we interviewed for this story cited poor health as the reason for being out of work and broke. Indeed, California Emergency Foodlink found that 28 percent of its clients had at least one person in poor health in the household. Thirty percent reported having to choose between food and medicine or medical care every month. And people who receive health-related disability checks from the state don’t qualify for food stamps at all. Their checks total about $800 a month.

While some families may turn to a food bank or church in an emergency or only once in a while, many rely on such food distributions every month or every week, just to survive. 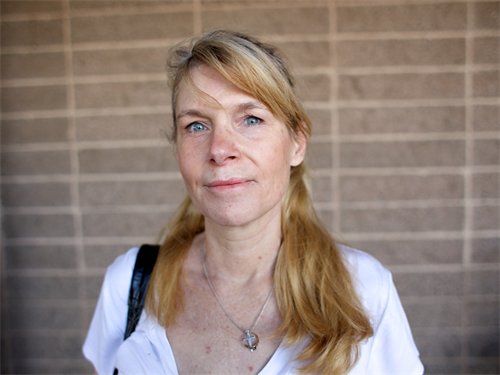 Kimberly Gibson visits Ebenezer every month for food. She is a former state worker who was forced to leave her job because of degenerative disc disease. Her back gives her constant pain, and she has been diagnosed with depression.

For six years, Gibson has lived at Martin Luther King Village at 47th Avenue and MLK Boulevard, just across the street from Ebenezer. MLK Village is a supportive housing program run by WellSpace Health and Turning Point Community Programs.

The housing was built to help people with mental illness avoid homelessness. Each resident pays steeply reduced rent for a 400-square-foot, one-bedroom cottage inside a well-maintained gated community. It’s tucked in behind the AM-PM market.

In the last year-and-a-half, Gibson has lost much. Her adult daughter died last year from an asthma attack. Gibson says the grief and depression are at times debilitating. In September, she wrecked her car and broke her neck, so she wears a neck brace much of the time. The pain can make getting around on foot or transit nearly impossible.

For Gibson, who once made a decent living, being without money and transportation is deeply frustrating.

"I miss just being out there in the world," she says, her voice becoming choked with emotion. "Here, you’re kind of…it’s just boring to me. You get tired of running out of money or having to budget so tight."

Kimberly Gibson shops once a month at the FoodMaxx on Florin Road in Sacramento. By the end of the month, she is out of fresh produce.

Turning Point staff will drive Gibson on her monthly grocery-shopping trip to FoodMaxx on Florin Road. Without the Turning Point help, Gibson says, she doesn’t know how she could do basic chores like grocery shopping. She hopes she can soon get her back pain under control, and her car back on the road.

More Than Something To Put On A Plate

Gibson’s story and others in The Avenues suggest that hunger and food insecurity are often woven through the other problems that can arise in people’s lives.

We ask Pastor Karen Abrego if she could see a time when there would be no more hunger in The Avenues.

At the same time, hunger is also connected to local policies like transportation, housing and neighborhood economic development.

"I think more than just handing out a bag of food, there needs to be a comprehensive plan," Abrego says.

And if you look closely, you’ll see there is a lot of work being done by community groups in south Sacramento and places like The Avenues in particular.  Abrego is part of the Avenues Community Collaborative, which includes representatives and parents from local schools, and non-profits like the Community Resource Project, which just opened a center on 41st Avenue.  CRP will serve as a hub for much needed social services in the area, enrolling people in nutrition and utility assistance programs, or signing them up for health insurance or, Abrego hopes one day, for English classes.

Across from the new CRP Center is the Rainbow Community Garden. For $25 a year, people get their own plot to garden. Soil Born Farms helps coordinate the project, and during a recent visit to the garden, it was lush and filled with lettuce and tomatillos, peppers and sunflowers.

Pastor Karen Abrego helps arrange bags of food for distribution at Ebenezer Christian Center in "The Avenues" neighborhood of Sacramento.

It is coordinating efforts with several local non-profit groups in parts of Oak Park and south Sacramento. One part of the Sac BHC program sends the group Ubuntu Green to install garden boxes for low-income residents. Farmers markets—especially markets that accept food stamps—are another resource for improving food access in south Sacramento neighborhoods.

And while a community garden might not put much of a dent in the overall level of hunger in a neighborhood like The Avenues, it may add a little green and some hope where they are in great need.

"This neighborhood needs so much more than just something to put on a plate," Abrego says.

Community Engagement: We Want To Turn You On!