Part 4: Tuberculosis Tackled By Teams on Both Sides of US-Mexico Border

Researchers, doctors and public health workers on both sides of California's southern border are teaming up and using state of the art technology to tackle tuberculosis, a dangerously infectious, but curable, disease. Smartphone technology adopted by researchers in San Diego and a new clinic in Tijuana championed by a doctor known for curing the toughest cases of the disease are helping to save lives.

"I watched my kids on their smartphones and they're sending videos all over the place and I thought, why couldn't we do this for a practical application?"
Dr. Richard S. Garfein 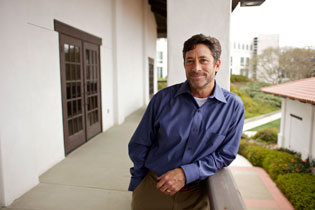 Tijuana has the highest tuberculosis rate in Mexico with 50 to 60 cases per 100,000 people, compared to 14 cases for the rest of the country. The TB rate in the United States is at an all time low, at just 3.6 cases per 100,000. The rate in San Diego is more than double that. The two cities combine for the highest concentration of TB of any cities along the U.S. - Mexico border.

"We know the bug will not stop at the frontier, so we are trying to approach the problem as a regional problem, not like Mexico and the U.S.," said Dr. Rafael Laniado, lead doctor at the tuberculosis clinic at the General Hospital in Tijuana, about three miles south of the border.

The Baja, California state government built a $700,000 state-of-the-art tuberculosis clinic to treat drug resistant TB, which accounts for a small percentage of the approximately 1,000 new cases every year in Baja. Diagnosing the drug resistant variety of the disease requires costly, specialized equipment and treatment is more expensive and takes twice as long as the non-drug resistant version.

The doctor has been working hand-in-hand with his counterparts on both sides of the border to push for more healthcare workers, better testing and cheaper medicine to help stop the spread of TB. "Fortunately, my colleagues from the U.S., the physicians and the helpers, in general, we're a very tight community. We suffer along and we understand each other," Laniado said.

TB is a highly infectious, airborne disease. Among the specialized equipment at the clinic is a sophisticated air filtration system that sucks up potentially contagious TB bacteria and zaps them with ultra-violet light.

Every employee in the clinic wears a facemask, except Laniado. "I was born on Krypton so I am tuberculosis-proof," he joked, "No, I never used it. Also, I think the patients like it that I am not scared of them."

Not everyone who carries the TB bacillus gets sick, and the bacterium can lay dormant for a lifetime. Left untreated, the active tuberculosis destroys the inside of the lungs until patients can't breathe and they die.

In the last few years, Tijuana has turned into a destination for people in Mexico to be cured of drug resistant TB. Laniado says a quarter of his patients have moved to the city solely to go to his clinic.

In 2009, Baja California gained access to lower cost drugs through the World Health Organization, and a grant from the U.S. Agency for International Development allowed Laniado to send sputum samples to labs in San Diego where diagnoses could be made more quickly and accurately. Conference calls with his counterparts in San Diego have helped Laniado learn how to treat drug resistant TB more successfully.

Laniado places a stethoscope on the back of a 23-year-old patient to listen to the patient's lungs. The patient has lost weight since he got sick. Beneath his bulky sweatshirt, he's very thin. He has been treated twice for TB in three years, but is not yet cured.

"His lung is extremely destroyed," Laniado said. "I always make little drawings, just to know." The doctor flips through the patient's file to find the pair of lungs he's sketched. The left one is scribbled out.

A few months ago the young man was sent by his doctor to Laniado's new clinic, where he diagnosed with a type of TB resistant to four drugs. Asked what the patient's prognosis would have been five years ago, Laniado said: "He would be dead."

Laniado said this patient will be cured, but will have to live with one lung. The doctor said 90 percent of the patients in Baja California are cured today. The worldwide cure rate is about 50 to 60 percent. "We have the highest cure rate in the country," he said.

Another key to the successful treatment of drug resistant TB is a practice called directly observed therapy, or DOT. The World Health Organization and the Centers for Disease Control recommend this method of treatment.

A precise medication regimen is a key element of DOT, so a promotor, or health worker, goes to each patient's house to watch the patient take medication twice daily. It's an expensive, but necessary, way to guarantee that patients finish their treatment.

"Once we start treatment, you might be symptom-free in maybe a month. And you will feel as better as you have felt for the last year. So, they feel so good, and they say 'I don't need any treatment anymore. I don't have any cough. I don't have any fever. I have a lot of appetite. So, these pills? I don't want to take them.' It's human nature," Laniado said.

If patients discontinue treatment before they're truly cured, the TB germ actually becomes stronger and can become drug resistant. When that happens, treatment can take 18 months, or longer, and require as many as 20 pills a day.

"What I am worried about is promotores. We need more promotores and supervision."
Dr. Rafael Laniado

Since 2006, with U.S. Agency for International Development funding, promotores have been assigned to all drug resistant TB patients in Tijuana. The money also covers lab testing in San Diego, but it runs out in June.

Thirty miles north of the border one of Laniado's U.S. colleagues is hard at work on a potential solution to Baja, California's promotor shortage. Dr. Richard S. Garfein, a professor at the UC San Diego School of Medicine Division of Global Health, has plans to use smartphones do some of the promotores' work.

"This is an HTC phone by Sprint. It's a smartphone, and we use it to implement what we call our video directly observed therapy, or VDOT intervention," Garfein said.  The idea is to maintain the World Health Organization and CDC standard of care, but to cut down on the resources it takes, especially in a city like Tijuana.

"It's a very large city. It's very spread out. It's a congested city so traffic - just travelling can be quite difficult," the Garfein said. "The other thing is that the TB control programs lack the resources to provide a caseworker to observe all the patients. Without some new mechanism of delivering DOT, it's just not possible."

All TB patients in San Diego have observed therapy, but it's expensive. One day a few years ago, Garfein was at San Diego County's Office of Public Health where he saw San Diego TB caseworkers using a clunky camera-phone system to watch patients take their medicine via two-way video.

Garfein says a nine-month pilot test of the equipment saved the county 28,000 miles of driving and about 800 hours of staff time. "I thought it was brilliant, but then I thought, couldn't they do this with a mobile phone? We're in the 21st century now. It seems like there's a better way to do this. I watched my kids on their smartphones and they're sending videos all over the place and I thought, why couldn't we do this for a practical application?"

The doctor said he thought the clunky camera-phone should be abandoned in favor of an application for a smartphone. Garfein thought there should be an app for that. He submitted a grant request to the National Institute of Health for a pilot project, using a smartphone, and it was approved.

Garfein, along with San Diego Public Health and Tijuana's TB Control program, passed out free smartphones to 43 patients - some in San Diego and some in Tijuana.

Like tens of thousands of people in the region, some of the patients cross the border daily to work, visit family, to go to the supermarket or the bank. Directly observed therapy was impossible for them before the smartphone app, because even if a promotor was available, the patients weren't home.

"It's not just making it cheaper and easier. It is actually solving a problem that was not being dealt with before," Garfein said.

Back in Tijuana, one of Laniado's patients has just dropped off a sputum sample. She's been part of Garfein's smartphone program for five months, and has just one month of treatment remaining.

She's 25 years old, wearing skinny jeans and has her long hair pulled back into a ponytail. As the patient leaves Laniado's clinic, she notices that it's just after 11 o'clock. She takes TB medications every morning at 11. Instead of racing home to meet her promotor, or missing the meeting, the woman reaches into her little black purse for her phone and pills.

She prepares the phone to record and holds each pill up to the camera. "Today is Monday, February 13, 2012. It's 11:15 in the morning. Today I'll take two dorval pills. They're maroon-colored capsules," she says. Then the woman swallows the pills with a sip of water.

She says when she first started TB treatment, she had to go to the clinic everyday just to take her medicine. She says some of the other patients she saw battled the routine because they lacked the resources - a car, bus or taxi fare, time off work - to make the daily trip. The smartphone solution seemed like a good idea, she says.

Across town one of Tijuana's TB Control program promotores has seen firsthand how much the phones help. Cristian Colin has just returned from dropping off medicine to patients. He pauses to check the patients who take medicine using the phone. Colin logs into the web page where patients' videos are posted, clicks on one and watches a woman take her pills.

Colin may miss the personal touch. But the technology gives patients the freedom to carry on with their daily lives.

As for UC San Diego's Dr. Richard Garfein, he plans to apply for more funding for a larger test of the smartphone app.

"The idea would be to make a system like this available to health departments anywhere in the world," Garfein says.

Dr. Rafael Laniado says its this kind of cross-border ingenuity that helps cure the worst cases of TB.

"Regardless of where you were born or where you live, patients have the right to receive the best treatment available," says Laniado.

Still, he and his colleagues need to find more funding to continue their high standards of care.

An Ounce of Prevention Videos