My mom passed away the day before Mother's Day.

She had fallen ill last summer and was in and out of the hospital, ICU, ER and three nursing homes after her initial illness. We eventually got her into a good nursing home that brought her back to health - albeit, with diabetes and a heart condition. Her infections cleared and in the end she had become happy, even sociable at the nursing home.  The staff called her a friend and she even joined a resident's committee. But it took some time for her to come around to this.  It took time to overcome her fears of new mobility problems, and to adjust to living now in a nursing facility instead of in her own home. She was initially reluctant to even leave her room and join in social activities. But soon enough, it was music that broke the ice. Mom always enjoyed music.

She loved the sound of a choir. Her favorite Christmas music was a record of the Robert Shaw Chorale, recorded in the early 1960s.  She liked music that swings. When I was a boy she often mentioned how much she enjoyed San Francisco Dixieland legend Turk Murphy. She liked to boogie down. In the 1970s after the movie "The Sting" came out, I bought the soundtrack on LP which mom loved.  One day in 1976 I even snapped this photo of her dancing down the hall when I played it. 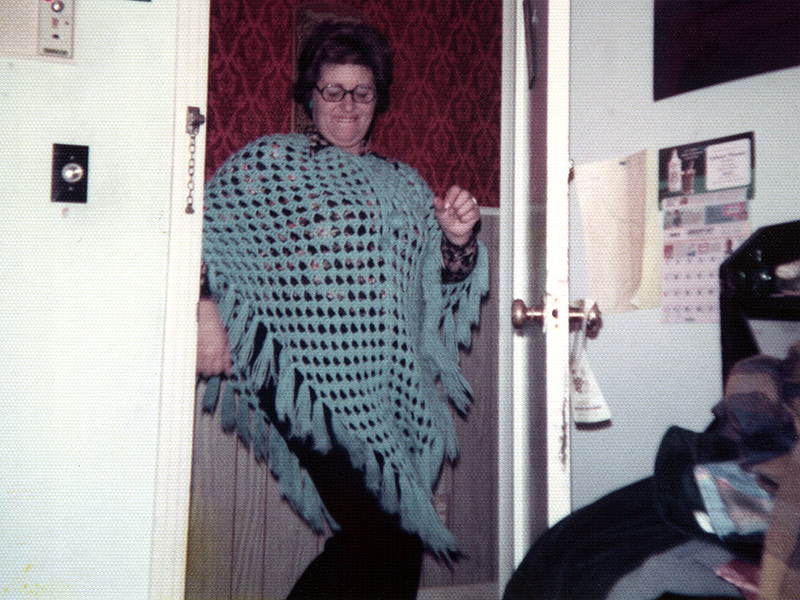 As she got older, in the 1980s, I recorded cassettes for her of Glenn Miller and others. In the early '90s she bought her own CDs of Dixieland, and more recently I bought her albums of singers she said she liked, such as American Idol winner Ruben Studdard and Scottish phenom Susan Boyle.  And though she had problems operating it, a few years ago I bought her an MP3 player and loaded it with Mel Torme, Frank Sinatra and Billy Eckstine.

In her early days at the nursing home she was reluctant to do anything but watch TV and eat meals in her own room. One day when I was wheeling her back from physical therapy we passed by a group of residents singing along with a man who turned out to be the home's chaplain and a guitarist.

"Do you want to go over there and listen?" I asked mom.

The very next song the chaplain sang was an old one that mom’s grandmother used to sing to her, "In The Garden." Mom sang along and later said that she hadn't thought of that song in ages and it brought back so many happy memories. She didn't even need the lyric sheet the chaplain had passed around. She still solidly remembered the words and mom sang them cheerfully. Here’s Anne Murray singing it:

That song was what broke the ice for mom to become more social, to begin eating in the dining room where she made friends and to participate in activities. Music was the key that opened the door to happy experiences.  All she had to do was just walk through and welcome them, and she did.

She also went to the lobby to listen when local musicians came to the home to perform.  [Attention area musicians: your performances at nursing homes are hugely welcome and mean so much to the elderly.]  Memories recalled by listening to music can reaffirm a sense of self. Attending a performance or participating in sing-a-longs provides socialization, can help to express emotions and certain songs can affirm one’s faith, ethnicity or nationality.

We are still planning mom's memorial. If I could I would have another of her favorite groups, the Mormon Tabernacle Choir, perform "In the Garden."