Art And Music Creators Find A Home At Sol Collective 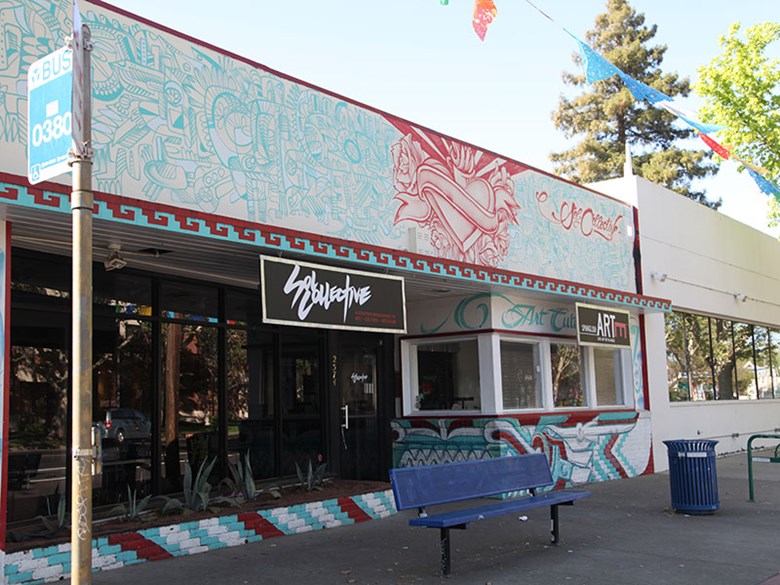 At the heart of Sacramento’s Broadway corridor is Sol Collective -- a community center inspiring artists to reconnect with their heritage. The art and music coming from Sol Collective is getting attention far beyond Sacramento.

Sol Collective is always buzzing with activity. There are planning meetings for upcoming events. A poetry and song writing workshop is underway. There's a new art exhibit in the works. It’s a typical afternoon for this non-profit.

Estella Sanchez opened Sol Collective with its focus on art, culture and activism 10 years ago. At the time, she says arts programs were being cut in public schools and there was a need for a space that celebrates the city’s diversity.

“Sacramento is often noted as one of the most diverse cities in the country, but you wouldn’t know that by going around and listening to the music that comes out of here,” she says.

Sanchez, whose parents immigrated from Mexico, says Sol Collective is geared to second generation immigrants wanting to highlight their culture through the arts.

“For us, we’ve taken a conscious effort to promote those sounds and to really encourage young people to be excited about their cultural heritage and the sounds that brings… and to also be proud of where we’re at now and to be able to blend and fuse those things,” she says.

These culturally focused events include the center’s yearly Dia De Los Muertos celebration and a Piñata Festival. There is a workshop series focusing on Curanderismo, which delves into traditional medicine from Mexico. Sanchez says it’s vital to reconnect youth with their heritage.

“Young people who are rooted in their traditions and their culture are healthier and happier,” she says.

Funded by grants from organizations such as the California Endowment and the Sacramento Metro Arts Commission, the 3,200-square-foot space hosts performances and events. It features a gallery for rotating art exhibits, some retail space and a small lending library. Sanchez says the groups that come to Sol Collective represent Sacramento’s diverse demographics.

The center has also become a hub for progressive groups needing a place to organize. The Sacramento Activist School and the Sacramento Young Feminist Alliance hold meetings there. Recently, the Black Lives Matter movement, has also used the space to plan events.

But many people in the music programs, found they needed even more support if they wanted to pursue a career in the arts or music. Sanchez and Parmar say that’s where the center’s new record label, Sol Life Music, comes in.

Five years after opening Sol Collective, Parmar and Sanchez created World Hood. It was a supposed to be a project that was just for fun.

Born and raised in Sacramento’s Oak Park neighborhood, Sanchez grew up listening to cumbia and Latin rhythms. Parmar, who is of East Indian descent and was born in Zambia, listened to traditional Hindu music, such as spiritual bhajans. Growing up in Northern California, both were drawn to hip hop in their teens.

They say World Hood combines all of those sounds.

“World Hood is kind of a mix of what I imagine I was probably listening to at 12 or 13, sitting at the dinner table, listening to my older brother or sister playing hip-hop, or electro and my mom playing cumbia on the record player,” says Sanchez.

While performing as World Hood, Sanchez and Parmar discovered like-minded artists who were also blending traditional and modern rhythms.

“We were just waking up and understanding … this new emergence of music that had cultural roots, people who grew up in the U.S., children of immigrants,” says Sanchez. 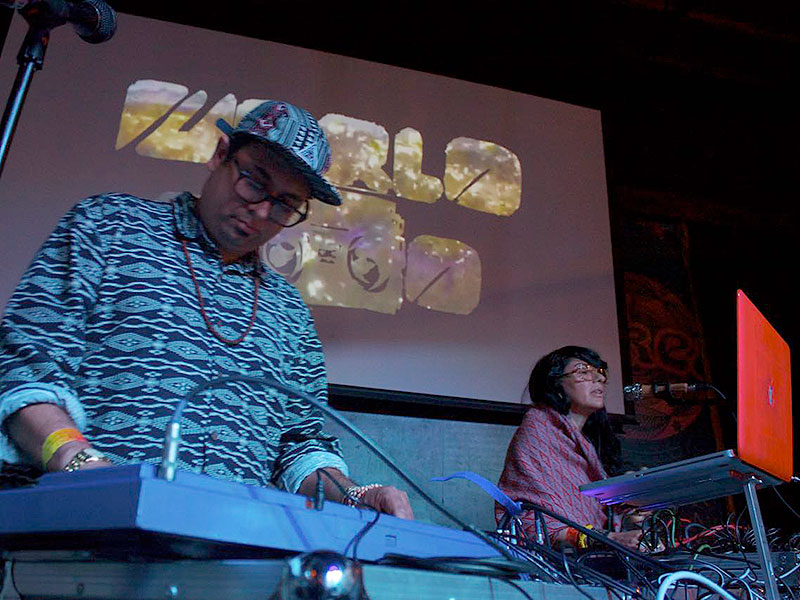 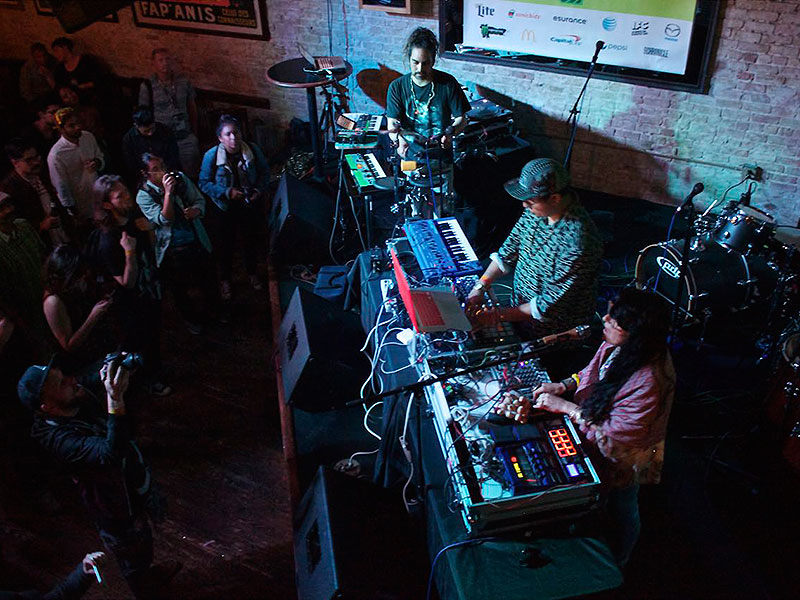 They came up with the idea for the Sol Life Music record label. The goal was to create a network for these cutting-edge artists and combine resources to organize tours and other events. While most of the Sol Life artists are based in Sacramento, the record label hopes to include artists from other cities, as well.

“We love to promote people who are continuing that cultural tradition within their music ... they haven’t lost their grandparents and parents’ music and it’s still in there even though it’s another type of music, they bring their own flavor to it,” says Sanchez.

For the label, Sanchez and Parmar want artists, who not only infuse their music with cultural sounds and political messages, but who are also engaged with their communities.

One of the artists they recruited was poet, mentor and MC Dre-T.

Andreas Tillman Jr., or Dre-T, leads Foreign Native, a non-profit organization working to engage youth through a range of creative expression. Through the group, budding poets and performers can test out and develop their skills. On Tuesdays and Thursdays, Tillman gathers young people at one of Sol Collective’s back room to work on their poems and song lyrics.

“Whether it’s the way we speak, the way our pieces are written, just having that feedback from each other, iron sharpen iron, it just makes everybody stronger,” he says about why it’s vital for artists to come together for critiques.

Tillman first came to Sol Collective via a poetry slam competition when he was in high school. Already a talented lyricist, Tillman impressed Parmar and Sanchez and he was asked to become part of Sol Life in 2011.

Tillman grew up in a fatherless household and became a dad himself at the age of 18. He says music was part of his own healing process.

“I do music because it’s therapy and it’s healing,” he says. “I see my music as a classroom, it’s an infinite space, no one is excluded, and there’s no limit in number in how big that classroom can be.”

Sol Collective brought the duo Native Children together. It was at the center that Salvin Chahal and Simarpreet Singh, or Wise Child, first met at the center and realized they had the same musical tastes.

“We connected very well, ever since then, we’ve been creating this alien funk, indo-futuristic sounds,” says Chahal.

The two recently performed at an art showing called Fused Perspectives, which blended the artwork of two Indian artists from the U.K.

“We’re just out here to promote expression, creativity and Sol Space,” says Chahal. “Someone came up to me, who’s been to Sol before and they feel like, they’re at a gallery in New York … it’s a very interactive, community-based type of environment right now, you see a lot of strangers having discussions with each other about the art.”

It’s a unique experience for the attendees -- who experienced the artwork, musical performances from Native Children and a bhangra dance team.

“I haven’t really been to a gallery like this one, I go to the ones on J Street, they’re all from local artists, this is kind of surprising that they are showcasing artists from the U.K.,” says Mandeep Klair, a resident from Sacramento. “I think I found a new spot to go to.”

Sanchez says having the co-op Sol Life Music label will enable artists like Dre-T and Native Children to continue to grow and expand their reach beyond Sacramento.

“What I envision for the label is that we create a very vivid and strong media source that amplifies voices that are important to our communities,” she says.

Sol Life’s future looks bright. The label was launched with an official showcase at Austin’s SXSW festival and has been invited to do another showcase next year. Meanwhile, Sol Collective will be celebrating its 10th Anniversary with a series of events starting in May through September. 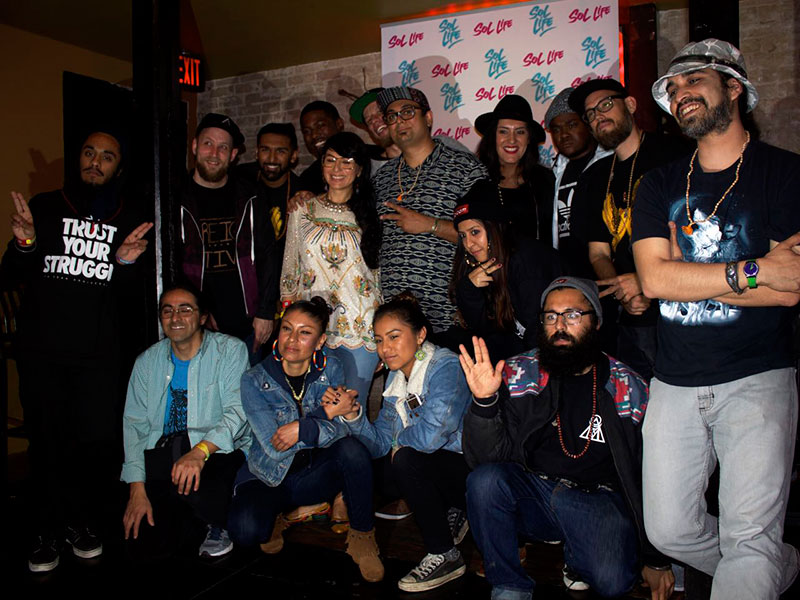 Sol Life recently partnered up with Patreon, a crowdfunding website for the arts. Learn more about what they do and their upcoming projects here. The list of Sol Life artists include: Dre-T, Seti X, World Hood, Native Children (Salvin Chahal, Wise Child), E-Tagg, Luke Tailor.