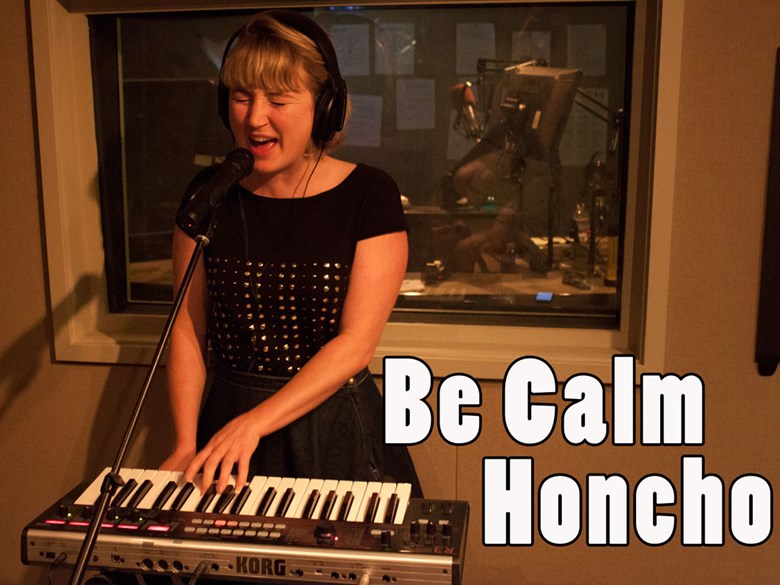 Shannon Harney didn’t actively form a band as much as coalesce into one. She met Alex Weston in Davis and the two began dating. They moved to the Bay together where Alex started playing in a seven piece band called Morph Dwarf.

That’s where he met guitarist Jacob Landry. The band began by backing Shannon's solo musical projects and first played as Be Calm Honcho in April, 2013. Since then it’s been a whirlwind of activity, from honing their live sound, to recording the band’s debut full length, Honcho Dreams, to signing with Davis-based Crossbill Records.

When asked about the momentum built over the last year, Shannon says “It’s hot. It’s hot and it’s busy and unrelenting, really. Once you’ve put that much time and energy and funding into a project there’s no point in taking any shortcuts or holding out.” 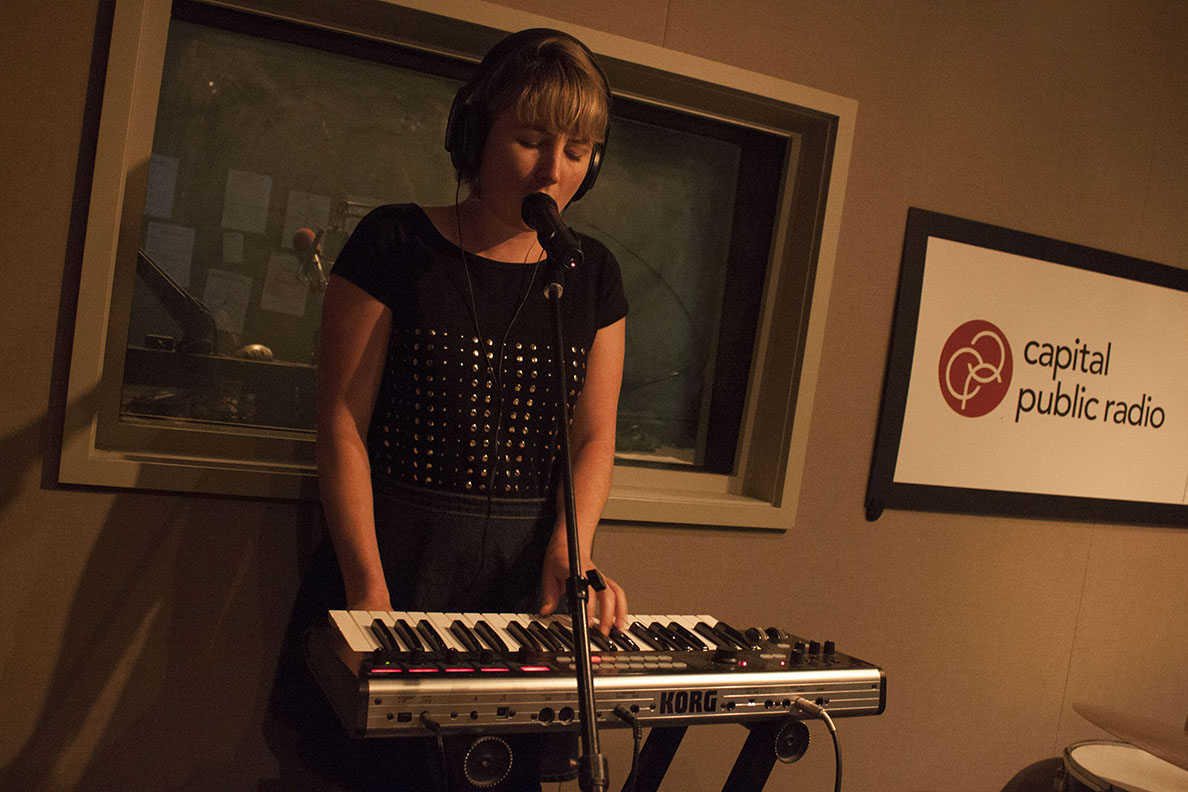 To record Honcho Dreams, Shannon Harney said she aggressively pursued John Baccigaluppi the former proprietor of The Hangar, the storied Sacramento recording studio. His new studio in Marin was barely open when Be Calm Honcho went in to record.

“I was super hungry to work out in the cool looking weird place out of the city... So we were the first band that recorded there. They were still sawing stuff and sanding and moving vibes in when we arrived.”
- Shannon Harney on recording Honcho Dreams.

Be Calm Honcho made as much of their time in Marin as they could. A handful of big names in indie rock were part of the experience. The recording session was engineered by Jason Quever of the band Papercuts. My Morning Jacket was stopped in to tour the studio and Be Calm Honcho took the opportunity to jam with the Louisville, KY Rock powerhouse ... even though there was a trade off. “They ate all our oysters.” said Alex. Shannon chimed in: "They ate all our oysters, taking tequila shots. We were living large."

Oyster theft or not, the experience made for a sort of vacation, says Jacob. “They have a castle-type looking building, and this tower…each level of the tower is enough for a nice sized IKEA foldout bed. It was pretty cool. We each had our own section of the tower.” 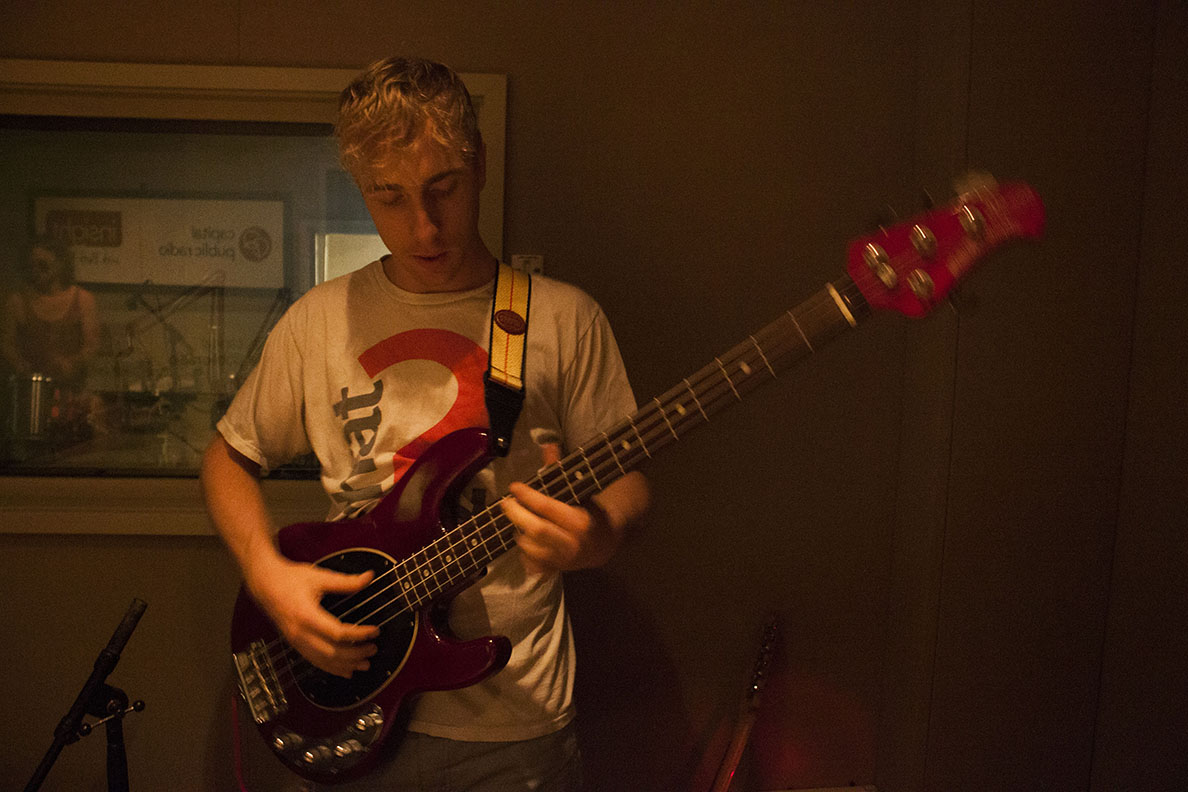 Never slowing down, Honcho Dreams debuted at CMJ, they've played a solid schedule of live gigs including high profile area shows like THIS, Midtown’s series of free summer concerts as well as the typical bar/venue scene up and down California.

The band is also prepping an EP. While the songs found on Honcho Dreams evolved from Shannon’s solo work, Alex says the band’s latest material is more orchestrated and revolves around input from the band as a whole.

"[I was] climbing through the crowd and touching people. I really enjoy that kind of performance."
– Shannon Harney

With broader exposure comes the inevitable genre-pigeonholing. “People are giving us all kinds of crazy genre names. I liked ‘dive bar stomp.’ We got that. We’re not that band but I like that. ‘Show tune surf’. We’re not that, but I like that too. We’re a happy-go-lucky west coast band with no feelings about serious things.”

Shannon’s stage presence is highly original and begs for classification (whether the band is prepared to give it any is another matter). At a house show just off the Midtown grid this spring the power cut out during her set. Without missing a beat, she adapted. “I have a long history of hosting open mics and doing spoken word poetry so I did maybe three spoken word poems off the mic; climbing through the crowd and touching people. I really enjoy that kind of performance. I really like to not be confined to a mic.” It’s one of the ways Be Calm Honcho differs itself from the flock.