Ear To Ear: Here’s What CapRadio’s Classical Hosts Are Loving This September 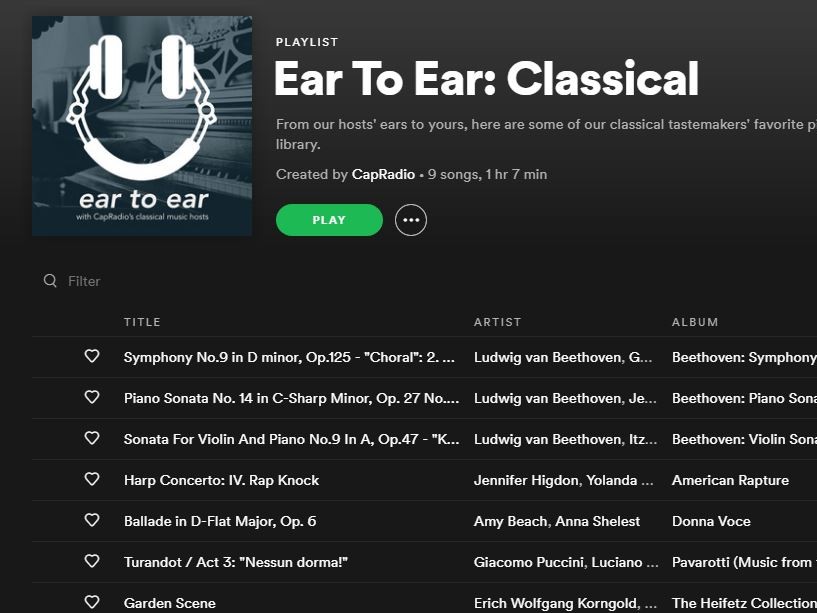 Each month, our music hosts put their heads together to create a playlist of the pieces that have been on their personal heavy rotation to help you get to know them a little better.

This month, we have an eclectic mix of music from near and far, old and new from Classical Hosts Jennifer Reason, Victor Forman and Kevin Doherty. Reason takes us into the mountains of Peru with some music played on a traditional Andean instrument. Forman takes us back to the Baroque era to celebrate CapRadio's extension of Sunday Baroque to its full four hours on our airwaves. And Doherty brings you some new and noteworthy music from Wynton Marsalis, Isata Kanneh-Mason and Aaron Jay Kernis.

I recently went on the trip of a lifetime to Peru. I had always dreamed of South America and seeing Machu Picchu in person, but I was not fully prepared for the true raw splendor of the vertiginous Andes Mountains. I was stunned by the vibrant colors and joy of a still impoverished native people living so high in the sky and the soul-level impact of tracing the steps of the ancient Inca warriors on the centuries-old, mystical Inca Trail.

While there, I fell in love with an instrument that was new to me: the charango! It’s basically a cross between a classical guitar and a ukulele (with an intimidating 10 strings layered in two sets of 5!), and is related to the lute the Spanish would have brought with them during the conquering and colonizing exploits of the Columbus era. 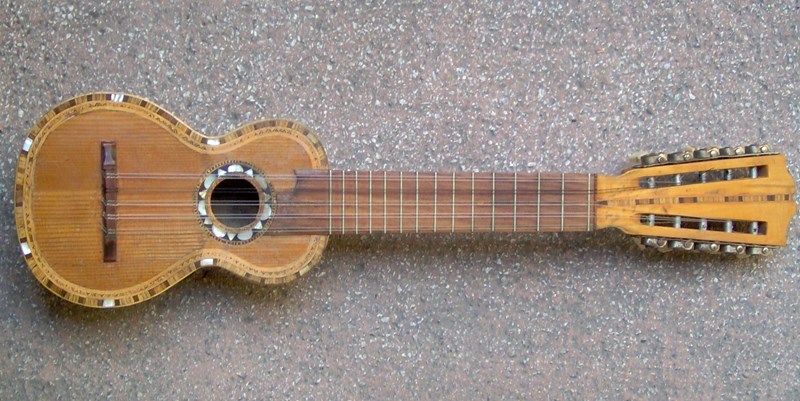 It originated in the Quechua region of the Andes, exactly where I was traveling, and wow did those mountain dwellers know how to play this instrument! They also enjoyed decorating the backs of them with breathtaking woodwork and paint renditions of their homes and tribal heritage, so turning over each instrument was like looking at a unique piece of art with a unique sound.

Here are three different Andean masters for you, charanguistas as they are properly called, playing songs they wrote on the charango. Enjoy the sounds of my trip, and of this beautiful place!

As CapRadio has recently expanded our weekly airing of "Sunday Baroque" to the full four hours that host Suzanne Bona produces each week (now playing 7-11am every Sunday morning on CapRadio), I thought  I'd offer a few of my own baroque favorites.

Johann Sebastian Bach — “Unaccompanied Cello Suite No. 1 in G Major: I. Prelude" — Performed by Yo Yo Ma

Johann Sebastian Bach: The Six Suites for Solo Cello. These are remarkable. When I first heard them (LPs of Pablo Casals playing them), their intimacy and eloquence brought me literally to the edge of my seat. I leaned in to the speakers, as if a friend was revealing to me a personal story full of details and personal meaning.

There are six suites of six movements each, and with each preceded by a prelude, followed by then-current dance forms of  allemande, courante, sarabande and gigue with the 5th movements of each being either minuets, bourreés or gavottes. These create the alternating fast-slow pattern. Inviting personal interpretation (and why listening to different cellists play the Suites is revealing), Bach indicated no tempo markings so the speed of each movement is left completely up to the performer.

Many of the great (and not so great) cellists have recorded all the Suites, with some recording them multiple times. Yo Yo Ma has recorded them three times: In his late 20s, again in his 40s and recently in his early 60s. As Jennifer Reason said to me when discussing this fact, "That's like three different people playing them." Exactly. These pieces are subjective for both the performer and the listener during different circumstances of our lives.

Here is Ma playing the famous opening Prelude of the First Suite from his third recording of the complete Suites.  It's definitely different from his previous recordings which you can also search for on Spotify to compare.

George Philipp Telemann was a savvy baroque entrepreneur. He advertised, had engraved, printed and self-published about forty collections of his music between 1725 and 1740. Doing it all himself made him a wealthy man. In 1732, he began soliciting advance subscriptions to his upcoming three-volume set of music.

In a clever marketing move, he did not describe as "Overtures, Concertos and Sonatas" and so on, which would likely have not drawn much attention. Instead, he described it as "Musique de Table" or "Tafelmusik," calling attention to the then already long tradition of background music for feasts and banquets. Music labelled like this would likely attract wealthy subscribers in need of new music for such affairs and who could afford the extensive volumes that would each provide an entire evening's entertainment (whether to accompany a meal or not). Predicting wealthy buyers, he priced each subscription accordingly. With 206 advance subscriptions from not only his home of Hamburg but — astonishing for the time — 52 from abroad as well, his income from this project alone was more than twice what JS Bach was paid a year at his post in Leipzig. And Telemann tempted early subscribers with another fashionable lure: Their names printed beautifully in each book.

It was a popular and useful purchase at the time for the initial subscribers, and it remains one of the most useful collections to own today. Put on one CD and have an entire evening's sparkling and attractive music in the background. From the first Part, this is the first movement of the Concerto in the classic recording by the  ensemble Musica Antiqua Koln.

Occasionally I'm absolutely floored by the sounds humans create with music, both as performers and composers. This selection is a combination of both. Giovanni Pergolesi was born in 1710, then died at the mere age of 26. Apparently in poor health his entire life, he composed his Stabat Mater on his deathbed while at a monastery near Naples. Though he had already become celebrated for his comic operas, at his death he was well-known only locally. After death his fame spread quickly and for generations afterward, others, even Bach, modified his Stabat Mater with their own stamp, with it reportedly becoming the most reprinted score in the 18th century.

Here is not the often-shared opening movement but the finale written, it has been suggested, with hasty penmanship as if Pergolesi knew he was at his own end. This is the translated text, which repeats, before the Amen:

When my body dies,
grant that to my soul is given
the glory of paradise. Amen.

New and noteworthy: These albums are the ones that have been sitting at the top of a pile on my desk for a bit and I am excited that I’ve had the opportunity to listen to them. Now, I get to share them with you!

Wynton Marsalis is known primarily by his reputation as a jazz trumpet virtuoso and as the leader of the Jazz at Lincoln Center orchestra. But let’s face it, it’s not uncommon for CapRadio fans to hear Marsalis flex his classical chops with Haydn, Telemann, or some other early music trumpet concerto. To top it off, Marsalis is a prolific composer. Among his many jazz works and four symphonies, Marsalis wrote his Violin Concerto in D in 2015 for Scottish virtuoso Nicola Benedetti.

Marsalis describes the first movement, "Rhapsody," as “a complex dream that becomes a nightmare, progresses into peacefulness and dissolves into ancestral memory.” The entire concerto, in fact, weaves in and out of musical vignettes in a wide array of styles. The complete work is an adventurous listen and needs a couple of spins for it to fully sink in, but it’s well worth the ride.

Pianist Isata Kanneh-Mason is the eldest sibling of what I refer to as the current first family in classical music. Her cellist younger brother Sheku Kanneh-Mason made quite a name for himself with the 2017 release of his chart-topping album "Inspirations," and as a featured performer at the Royal Wedding of Meghan Markle and Prince Harry.

For her first foray into the recording world, big sister Isata has chosen to curate works of the undisputed yet underrepresented queen of the Romantic piano, Clara Schumann. Schumann, for the majority of her 200 years, has been better known as the wife of Robert Schumann. Though historians and musicians alike are finally starting to take notice of Clara Schumann the composer as well as the tour-de-force of a human that she was. This offering is a prime example of that recognition.

It’s rare when an artist can stray from the canonical repertoire when releasing a debut album. Perhaps this means Schumann is finally securing her place as one of the great musical personalities from the 19th century! Kanneh-Mason performs with violinist Elena Urioste on this track from the new album, "Romance."

Both Aaron Jay Kernis and guitarist Jason Vieaux are Grammy award winning musicians, which makes this collaboration extra special. Kernis is also the 1998 Pulitzer Prize winner for music and a serious composer, which makes this piece even more fun.

In an attempt to reflect the dance styles of the 1990s, Kernis found that he was drawn to a parody suite about dance music from the seventies. The work for string quartet and guitar is in four movements and with names like “Dance Party on the Disco Motorboat” or “MOR Easy Listening Slow Dance,” it’s hard not to chuckle immediately. Kernis, however, is not one to forsake his intelligent and intense style of composition, but the music is fun and listenable.

The grooving second movement, “Salsa Pasada,” is reflective of a traditional Afro-Cuban salsa according to musicologist Laurie Shulman who says, “the title may be interpreted as salsa that has passed its ‘use by’ date.”