California Museum archivist Jason Sarmiento and executive director Amanda Meeker pose in front of an entrance to the California is in the Heart exhibit, which highlights Filipino contributions to state history. The exhibit opens on Oct. 29, 2022.

For many Filipino immigrants who came to California and the rest of the United States in the 1900s, finding community was crucial to survival.

In that context, basketball wasn’t just a game — it was a possibility of meeting someone from one’s home province or hometown, a lifeline and substitute for family in an unfamiliar place.

The cultural phenomenon is also a personal one for archivist Jason Sarmiento: His dad used basketball as a means to find community when moving to the States.

“Basketball is the most popular sport in the Philippines, so it's one way to convey culture from the mainland, or the homeland, into the diasporic community,” Sarmiento said. “This is one way to make California their home while also preserving a lot of their cultures from their specific areas in the Philippines.”

Stories about how Filipino immigrants built community are among the many displayed in a new California Museum exhibit, California is in the Heart. One of those includes a blue, white and red basketball jersey — from Sarmiento’s dad.

The name of the exhibit is a nod to Filipino writers Carlos Bulosan, who wrote “America is in the Heart”, and the late Dr. Dawn Mabalon, author of “Little Manila is in the Heart”. Both called the Central Valley home.

Developed with support of the Filipino American National Historical Society (FANHS) and in partnership with the Bulosan Center for Filipino Studies, its first day open to the public is Oct. 29 — the tail end of Filipino American History Month.

While not the first Filipino-focused exhibit at the museum, “California is in the Heart” is much more thorough, said Amanda Meeker, the museum’s executive director.

“The first exhibit actually was a traveling exhibit from the Smithsonian,” she said. “But from that it's been at least 15 years, maybe 20. We are just so pleased to have these community partners with the Bulosan Center and the FANHS Museum in Stockton, to be able to bring lots of people from all over the area to experience this history and learn things they may not have known.”

Sections are dedicated to a historical timeline of Filipinos in California, prominent Filipino Californians — with a special nod to Filipino women — and Filipino roles in labor struggles, from the farmworkers movement to nurses’ unionization.

Linking Filipino towns in California from past to present

The exhibit is meant to catalog and commemorate the varied contributions Filipinos in California — as the state’s second-largest Asian American ethnic group — have made to the state’s history. 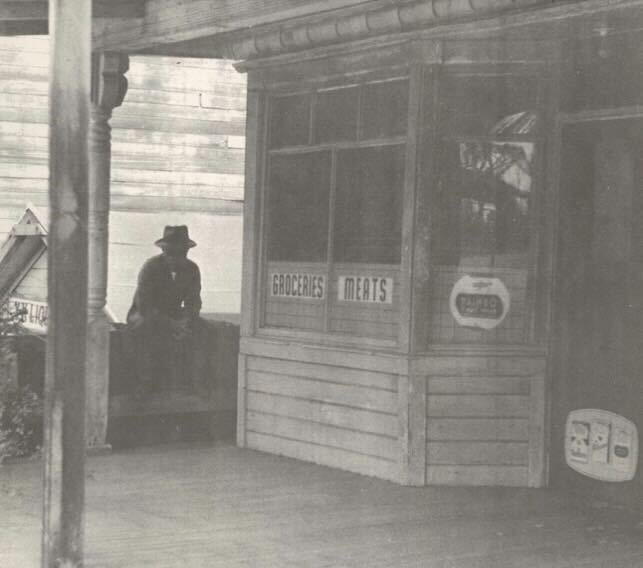 A Stockton manong, or elderly worker, sits in thought in Stockton's Chinatown, c. 1970.Photo provided to CapRadio by the California Museum and Bulosan Center, courtesy of the Kagiwada Library

“It displays Filipino American accomplishments across different generations, and it also shows that the Filipino diaspora is not a monolith,” said Sean Delizo, the California Museum’s lead educator.

At one end of the exhibit, a painted blue vine stretches from sampaguitas — the Philippine national flower — to the California poppy, winding through different Filipino historical events and narratives in the state.

The Filipino existence in the U.S. has been deeply intertwined with colonialism — while the Philippines was under Spanish rule, a Spanish galleon brought the first Filipinos to California in 1587, at present-day Morro Bay. But the first wave of migration to the States began en masse after the Spanish-American and Philippine-American Wars at the turn of the 20th century, during which the U.S. took control of the archipelago. Agricultural and factory workers began settling throughout the West Coast starting in the 1930s.

That first wave primarily created ethnic enclaves in the Central Valley, including Sacramento, Delano, Watsonville and Stockton, a hub for Filipino workers and home to Little Manila. 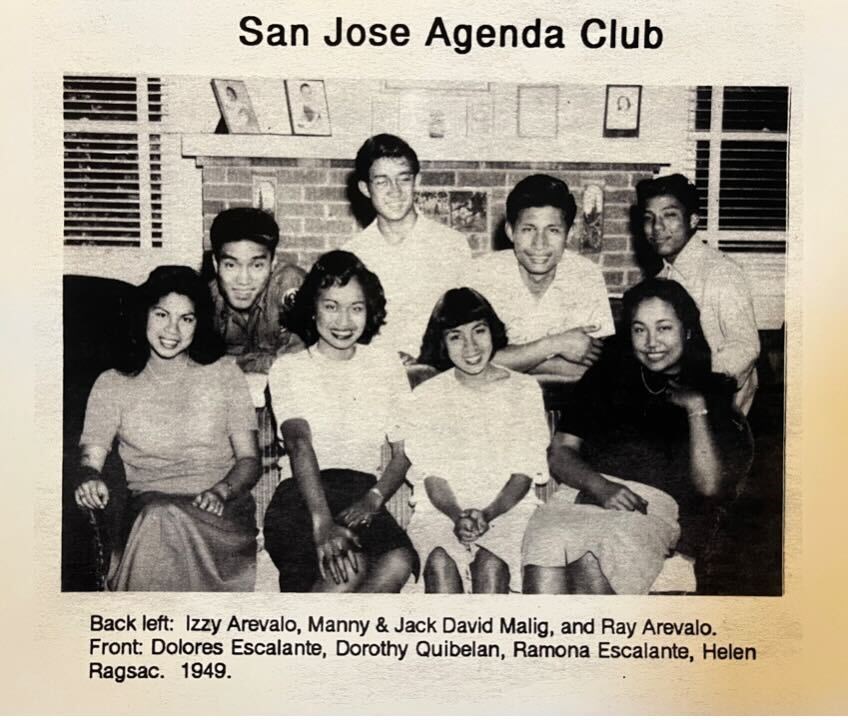 A youth club in San Jose in 1949.Provided to CapRadio by the California Museum and Bulosan Center, courtesy ofthe Ragsac Family Album and the FANHS Santa Clara Valley Chapter

“All Filipinos knew ‘that all roads lead to Stockton,’” as Mabalon put it.

Little Manila is home to the FANHS Museum, whose exhibit covering the four waves of Filipino immigration strongly influenced the historical Filipino timeline at the California Museum, according to Sarmiento.

“We merged a lot of our timeline from the one that they created,” he said. “It not only showcases the various accomplishments in our past, but also some of the tragedies such as the fall of the I-Hotel, and contemporary issues, too, which is with Filipinos who are low-income and their effects from the housing crisis.”

There will also be a map detailing Filipino migrant patterns and different areas of the Filipino Californian diaspora, along with more information about enclaves spanning the state, from Los Angeles and San Diego to San Jose, Daly City and San Francisco.

Mabalon is one of many Filipinas who have made crucial contributions to Filipino American history and to her community. 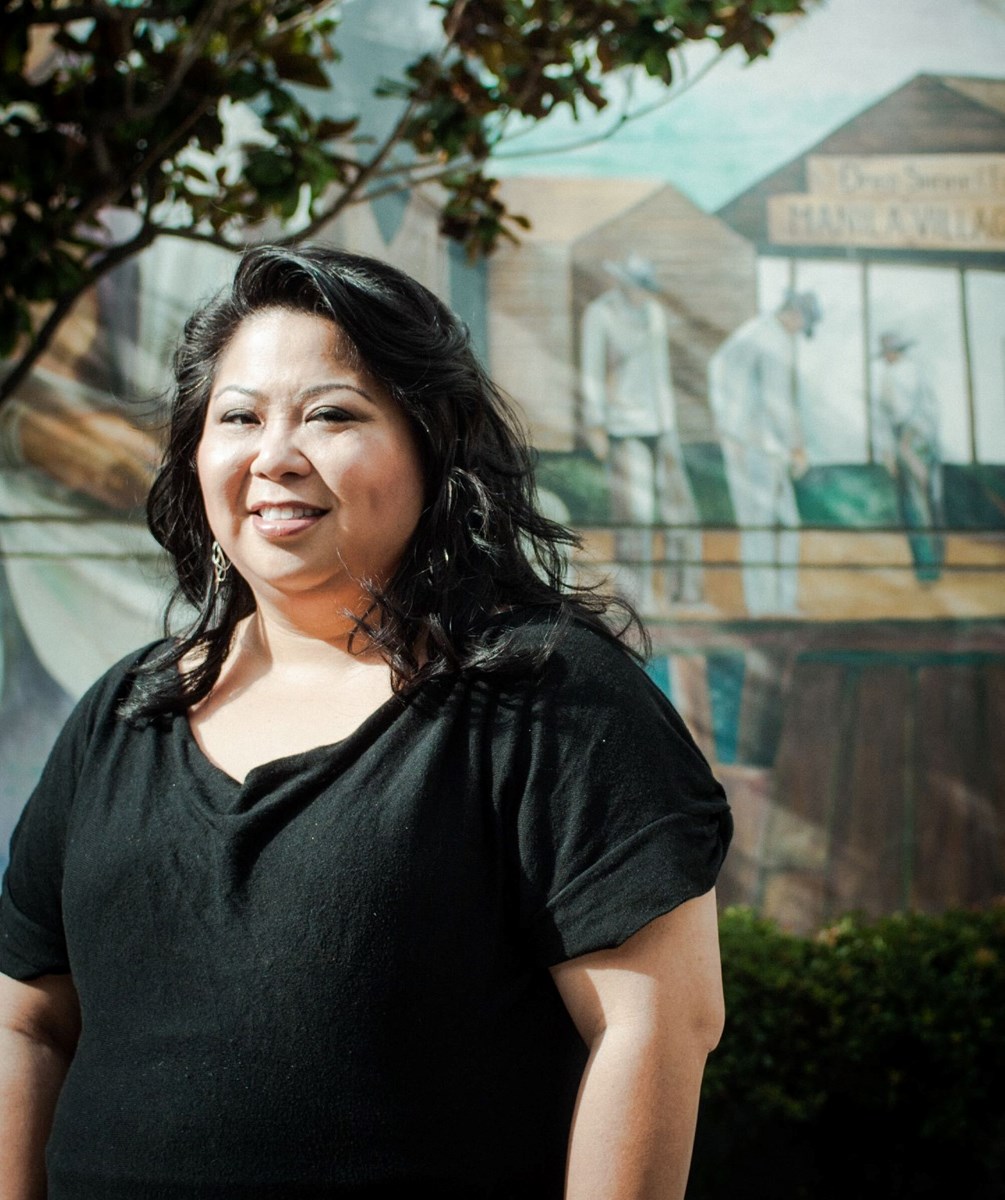 Dr. Dawn Mabalon, born and raised in south Stockton, dedicated her life to chronicling, studying and teaching the history of Filipino Americans, particularly in her hometown, before her passing in 2018.Photo provided to CapRadio by the California Museum and Bulosan Center, courtesy of Jeremy Villaluz

Through the work of Bulosan Center historian Stacey Salinas, a Cultural Studies Ph.D. candidate at UC Davis who helped curate the exhibit, there’s also a section paying homage to Filipina contributions to community-building.

“We showcase the history of various Filipino women’s clubs throughout California, with a pretty large emphasis on the Central Coast since it’s a relatively less known aspect of Filipino American history,” Sarmiento said.

Delizo from the California Museum said seeing Filipina women and the women’s clubs being displayed and recognized is a “humbling and honorable” experience.

“My mom and our grandmas, they’re the ones who held it down [in my household],” he said.

The history of labor rights in California intersects inextricably with Filipinos, though it’s only been in recent years that their contribution has been more broadly recognized. In 2021, California Governor Gavin Newsom pronounced Oct. 25 Larry Itliong Day, in honor of the Filipino labor leader.

But Itliong and Philip Vera Cruz were crucial in the farmworkers’ movement, helping organize with the manongs — elderly Filipino field workers — through the Agricultural Workers Organizing Committee, a predominantly Filipino union.

“Larry Itliong and AWOC started the [grape] strike a week before the National Farmworkers Association,” Sarmiento said. “Cesar Chavez joined the strike in connection with AWOC, Larry Itliong and all the Filipino elders who contributed to the strike.”

In recognition of the role Filipino farmworkers have had in California, Bryn Wieking, who worked with Salinas at the Bulosan Center to design the graphics for the exhibit, said the map with Filipino migration patterns will also have “the key spots for farming and agriculture, and the different produce they [Filipino farmworkers] have produced.” 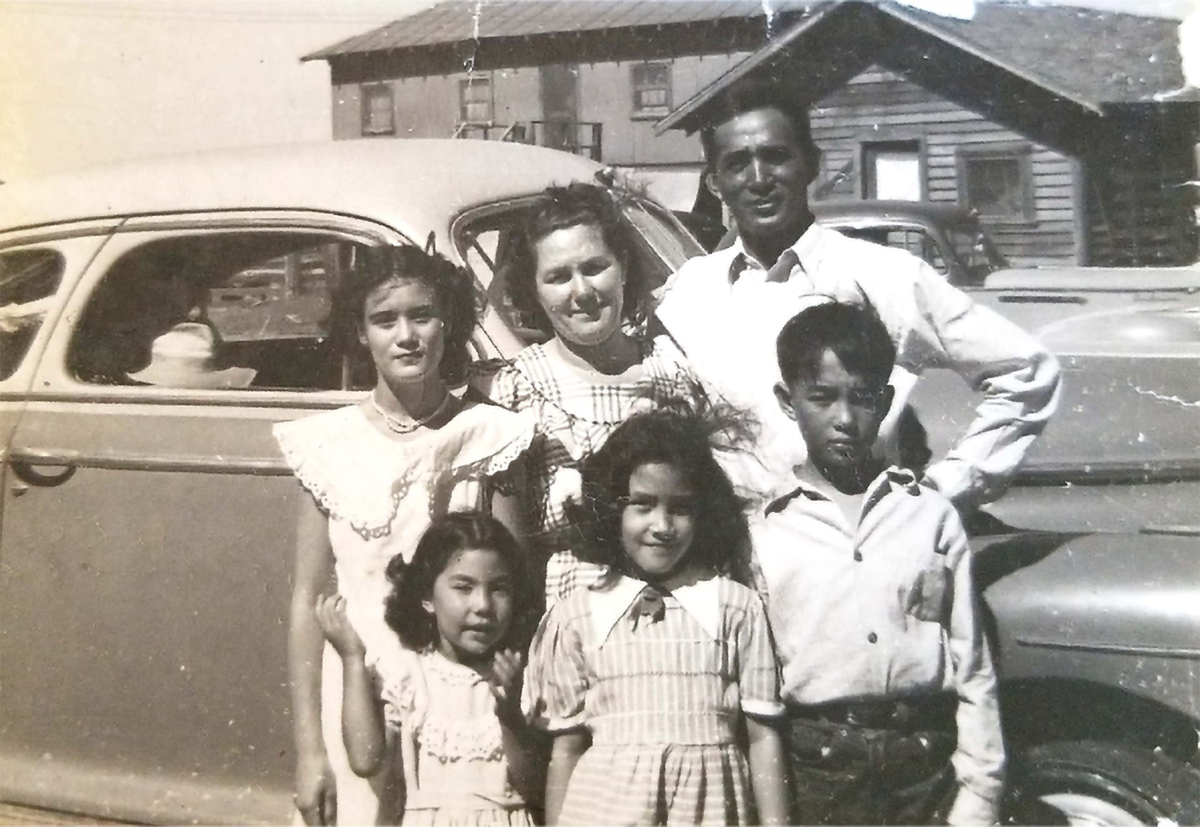 The Yanes family of Livermore, California, were rose farmers. This is a family photo c. 1950s.Photo provided to CapRadio by the California Museum and Bulosan Center courtesy of the center's Welga Archive

Another front where Filipinos have been particularly instrumental in fighting for labor rights has been nursing — a Filipina American is the president of both the California Nurses Association and the National Nurses United.

Before retiring, Delizo’s mom was part of the California Nurses Association, which provided additional support for the exhibit.

“That was her family, her second family away from home,” he said. “I do remember a few times when I saw them, picketing outside of hospitals, and seeing my mom. I was so proud to see her and all the folks that she worked with daily fighting for equal treatment of their coworkers so that they can get the resources and capacities they needed, not just for themselves, but also for their patients, too.”

Both he and Sarmiento hope the exhibit can be used as a teaching space for Filipino American educators, and Delizo says he hopes future exhibits can delve further into the labor struggle section, particularly around solidarity amongst different communities.

“I would love to see that expressed in different ways, a lot of the different labor movements that have happened between Filipinos and a lot of other groups across history,” he said.

“I love that it begins in Filipino American History Month, but extended beyond that,” Delizo said. “It speaks to the contributions Filipinos made within our state over various generations. There’s a lot of the story that is being told here. But there’s so much more that can be, in the future.”

How to see the opening

Tickets for the opening, which is 1 to 5 p.m. on Saturday, Oct. 29, are $5 with a $1.94 Eventbrite processing fee and can be purchased at the museum’s Eventbrite page. Food, drinks and wares from local Filipino vendors will also be available for purchase at the opening.

The California Museum is located at 1020 O St. in Sacramento.