Note: This page is no longer being updated. Find our latest updates on the shooting here.

Sacramento Police are searching for multiple shooters from an early Sunday morning shooting in downtown Sacramento that left at least six people dead. No suspects were in custody as of Sunday afternoon.

Police Chief Kathy Lester told reporters Sunday afternoon that police heard gunshots in the area around 10th and K streets around 2 a.m. and saw a very large crowd. At least six people have been confirmed killed, and officials say another 12 have been injured.

Police have released few details about the identities of the victims. During the press conference, Lester said all of the victims were adults and suffered gunshot wounds. Three men and three women were killed.

“What happened last night is the biggest and most recent example of what we all know — gun violence is truly a crisis in our community and has increased not only here in Sacramento but across the nation,” Lester said.

Lester said there are no suspects in custody, and she asked for the public's help identifying those involved. The department has set up a portal where witnesses can upload video of the shooting. The public can also call (916) 808-5471 or (916) 443-4357 to submit tips anonymously, with a reward of up to $1,000 for information.

We are aware of a social media video that appears to show an altercation that preceded the shooting. We encourage any community members with related video to follow the link/QR code below to submit the video to SPD. https://t.co/bQBuBtDM8m pic.twitter.com/pPdrHVkKuX

Police confirmed a stolen handgun was recovered at the scene, but did not provide additional details when asked at the press conference. Lester also said police suspect there were multiple shooters.

Video posted on Twitter shows a terrifying scene: individuals fighting near the corner of 10th and K streets, at the alleyway near a parking garage, then the sound of gunshots and dozens of people fleeing.

The Sacramento County coroner’s office identified one of the victims Sunday evening as Sergio Harris, 38. CapRadio had spoken to Harris Leticia Fields-Harris early Sunday morning at the scene of the incident. She said she’d received a call from her daughter that there was a shooting, and to come downtown. Her husband, Sergio Harris, was possibly one of those shot.

She said Harris loved his kids and was a "happy person."

"He just loved living life and trying to make a difference, making a mark on himself, you know, being better," Fields-Harris said.

Police are opening an information center for families of victims at City Hall, located at 915 I Street. Mayor Darrell Steinberg announced that he will attend a vigil to remember the victims on Monday evening at K and Seventh streets, and that he plans to speak at approximately 8 p.m.

Berry Accius runs the Voice of the Youth nonprofit, which helps young people. He says he came downtown at 2:45 a.m. immediately after he heard about the shooting.

“When I first came, I saw a victim who was injured, draped in blood, and another person screaming about her son. … Another lady screaming, saying she saw her sister take her last breath,” Accius said. 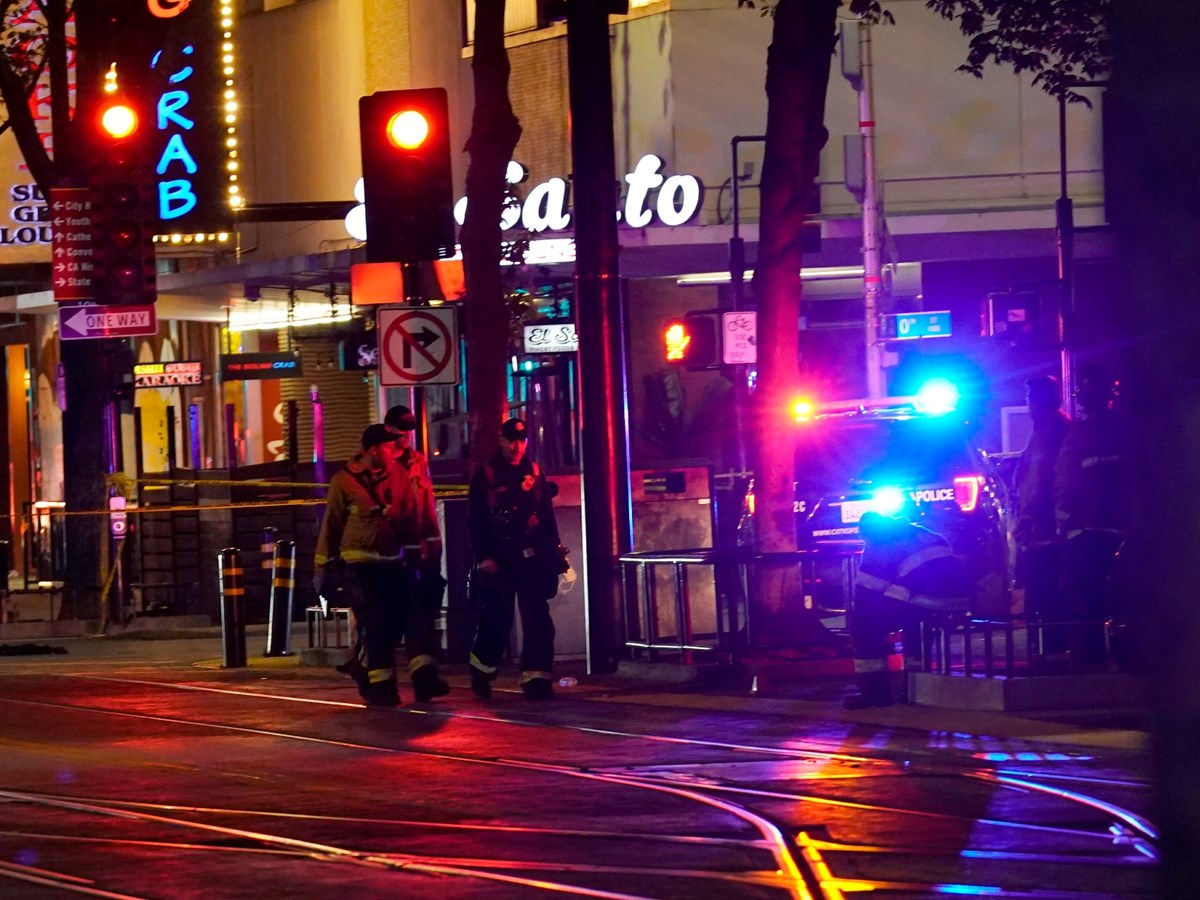 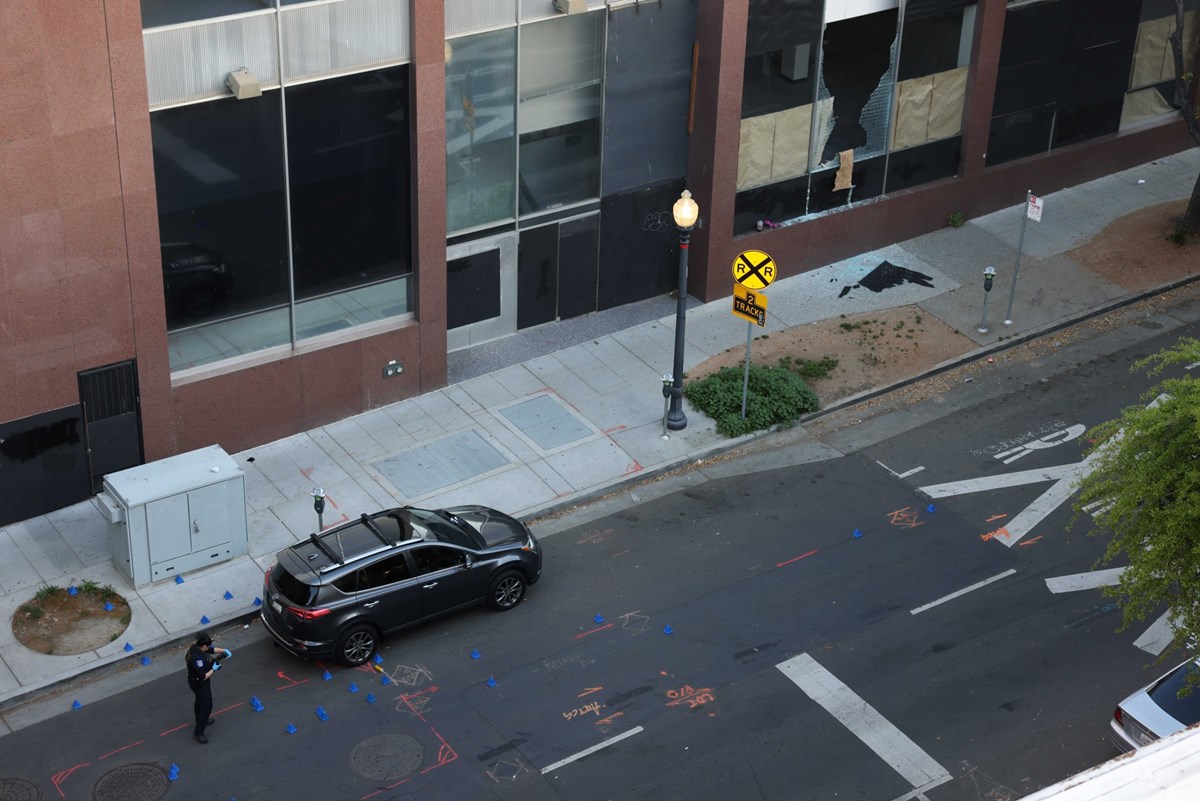 An investigator with the Sacramento Police Department takes a photo of the scene of a shooting near 10th and K streets Sunday, April 3, 2022.Andrew Nixon / CapRadio

He says he observed several victims looking for help on L Street near 10th Street, but that there was not immediately enough medical assistance for all the people injured.

Accius also noted that Sunday morning’s shootings come after other recent gun violence incidents in the central city and throughout Sacramento.

“If this is not a wake-up call for Sacramento and the things we need to do to change gun violence, I don’t know what is. We can’t keep on doing this, it’s too much,” he said. 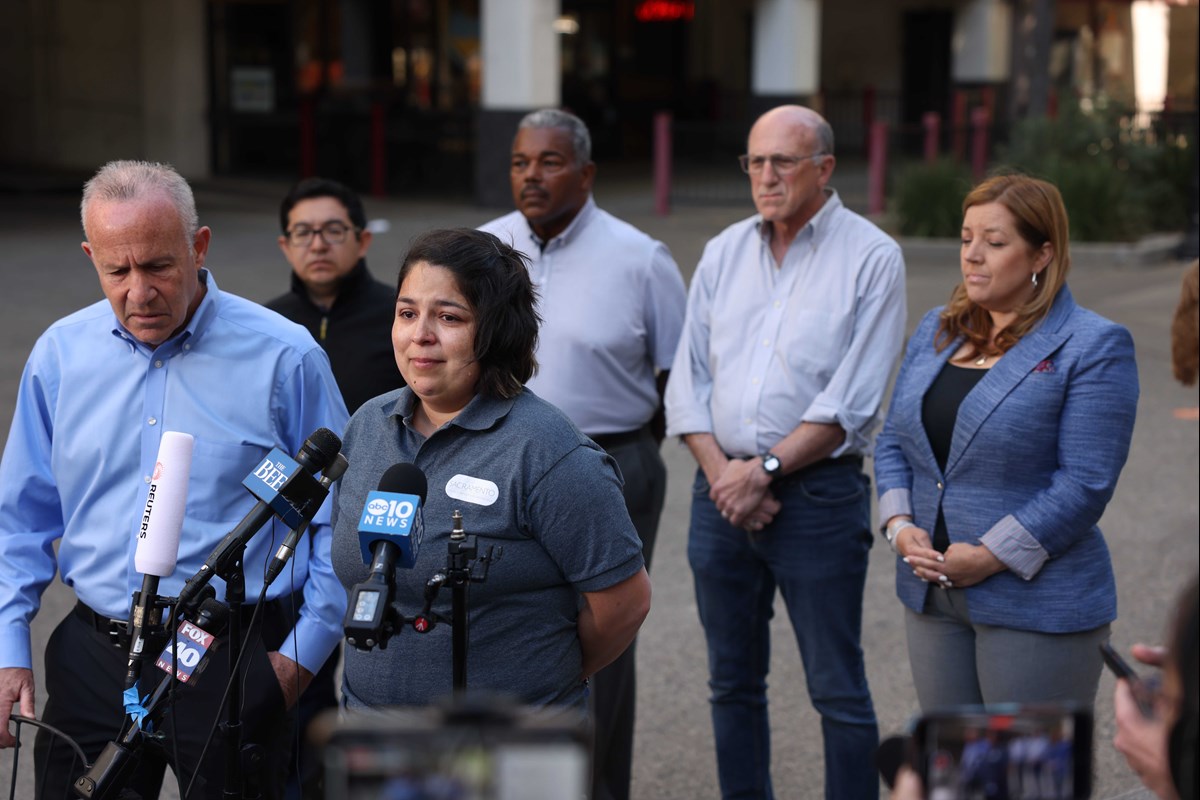 "Thoughts and prayers are not nearly enough. We must do more as a city, as a state and as a nation," Steinberg said. "This senseless epidemic of gun violence must be addressed. How many unending tragedies does it take before we begin to cure the sickness in this country?"

Later in the day, at the press conference with the police chief, downtown business leaders and community organizers, Steinberg called for more investment in youth programs, gang intervention and gun violence prevention. He also argued that the central city is safe, encouraging people to patronize restaurants and attend events.

The Sacramento Kings will play their scheduled game Sunday night at the Golden1 Center.

“We want to urge people to be safe, of course, but we don’t want to shut down either, because that would be the wrong response,” Steinberg said.

City Council member Katie Valenzuela, who's district the shooting took place in, fought back tears while she spoke about the shooting at the morning press conference.

"I'm heartbroken and I'm outraged," Valenzuela said. "Our community deserves better than this. I know this is a national epidemic, this is not unique to Sacramento, but we can stop it here. I believe we have the tools to do this … to say enough is enough. I will travel anywhere I need to travel and I will talk to whoever I need to talk to get these guns off these streets and to give our youth what they need to be successful, and that they don't get shot down on K Street while they're out trying to have a good time."

In a statement, Gov. Gavin Newsom offered his "heartfelt condolences to the family, friends, and to the wider community impacted by this terrible tragedy."

“The scourge of gun violence continues to be a crisis in our country, and we must resolve to bring an end to this carnage,” Newsom wrote.