Abalone are near extinction, but UC Davis researchers think they can help turn that around with the help of an old medical tool used in hospitals for decades: ultrasounds.

At the UC Davis Marine Laboratory in Bodega Bay, researcher Sara Boles picks up a red abalone from a big blue tank of water.

Before she can perform an ultrasound scan on the sea snail, Boles needs to rinse the animal's shell.

"I can't even take a picture through that, too much schmutz,” said Boles. “There we go."

After clearing the silt, Boles places a sheet of overhead transparency — or clear plastic — on top of the shell and moves the ultrasound wand back-and-forth over it, looking at the visual images coming through a small laptop a few feet away.

"You can sort of see the heart beating," Boles said.

Red abalone is just one of seven species that used to flourish along California's coastline.

"They were once abundant,” said Boles, “and due to a perfect storm of environmental and human consumption disasters, two of those species are now endangered and all of the fisheries are closed indefinitely. Our work is to help bring these wild animals back."

Her colleague, Jackson Gross with the UC Davis Department of Animal Science, says ultrasounds can be used to quickly detect when abalone are ready to spawn. That information is then passed onto aquaculture scientists who manage abalone reproduction in captivity.

"It's the same ultrasound that if you went to go see what the sex of your baby is, we're using that to look at the quality of the gonad of our abalone as they're progressing through their annual reproductive cycle,” said Gross.

Ultrasounds are non-invasive to the animal. The less abalone is handled, the less opportunity for stress or physical harm.

"Abalone have an amazingly strong foot that holds the animal to the tank,” said Gross “and so when you're handling an animal, you risk damaging that animal, injuring it, such as pulling it off of a rock, or in our case, pulling it from a tank.

“When we're dealing with endangered abalone, we're always concerned with injuring them accidentally during this process because they don't want to come off the rock just because we want to ultrasound them." 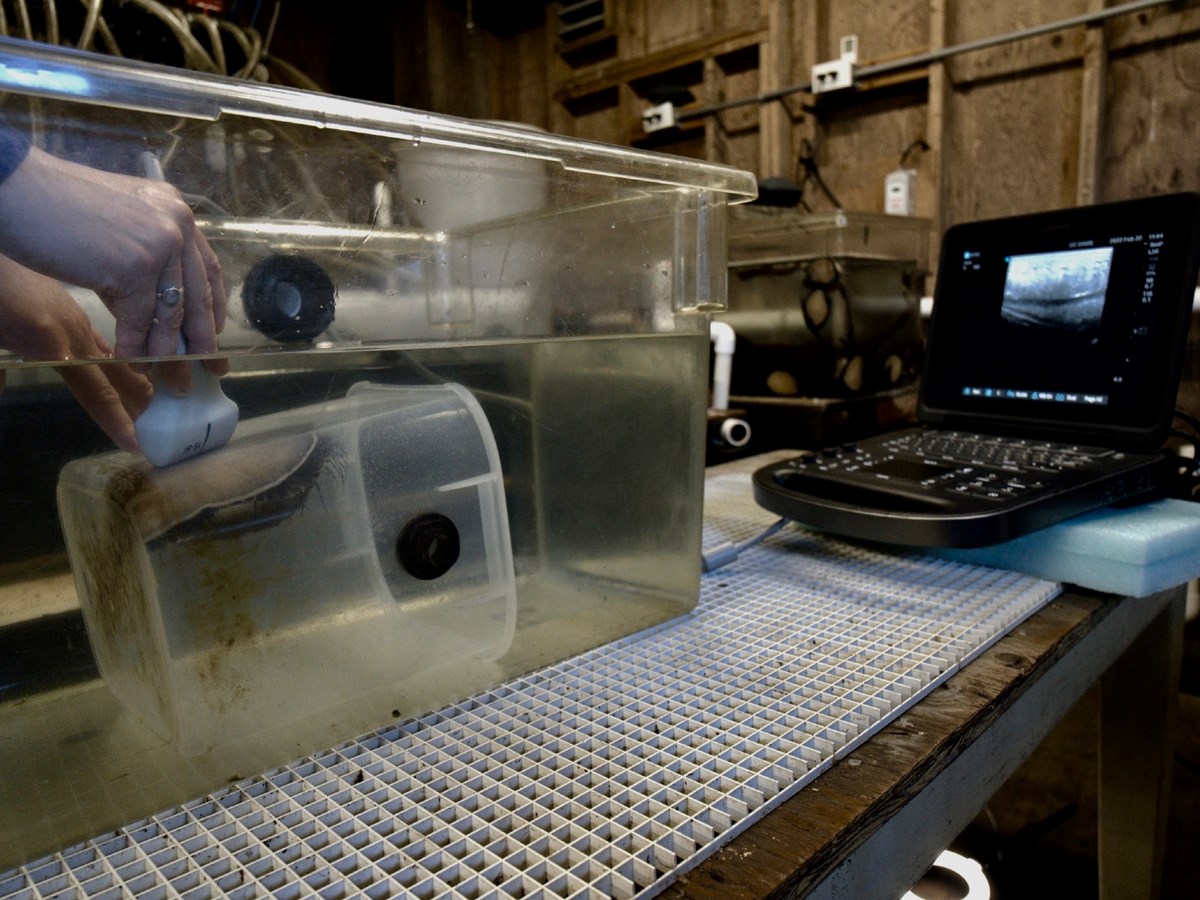 Boles says she uses two different ultrasound methods. One is directly through the side of the tank holding the abalone, which involves no handling of the animal.

“The other process is, during these actual scheduled spawning events or health assessments, we can place the animals on overhead transparency film and we can directly ultrasound through that material and get high-quality images,” said Boles. “The reason we use this transparency film is to make the animal more comfortable when it's attached to a substrate and so that the animal doesn't actually attach to the probe."

"What's exciting is that we don't actually ever have to take the animal out of the water to actually spawn the animal,” said Gross. "We're also able to use the ultrasound to evaluate heart rate and potentially other health metrics that we're currently exploring."

The researchers have created a gonad index score indicating the abalones' readiness to reproduce.

While demonstrating how the score works, Boles scans an abalone shell and carefully watches the laptop monitor connected to the ultrasound.

"That thick, black band — the ‘V’ shaped image — is what the gonad is,” Boles explains. “The thicker that is, the more reproductive it is. So I give that a score of three out of six."

Abalone used to have a spawning season, but Boles says warming ocean temperatures have thrown that out of whack.

"Rather than just going with previous seasonal, historical data of when to do this, the ultrasound actually allows us to get a look inside of what's actually going on,” said Boles, “because everything's changing and so it's not always about what season it is because seasons are changing."

The ultrasound research project is being funded by the U.S. Navy’s Pacific Fleet as part of its efforts to conserve federally endangered black abalone and find better ways to assess their reproductive health.

Because of black abalones’ low numbers and high vulnerability, Boles and Gross are using closely-related farmed red abalone to test the effectiveness of ultrasounds on abalone.

The red abalone bred at the UC Davis Marine Lab are kept in captivity for now and not yet released into the wild for repopulation efforts. However, Boles says that could change in the future.

Meanwhile, the researchers say, in addition to spawning, the ultrasounds may help them figure out how nutrition influences abalone reproduction development especially as climate change affects kelp, seaweed and other food sources.