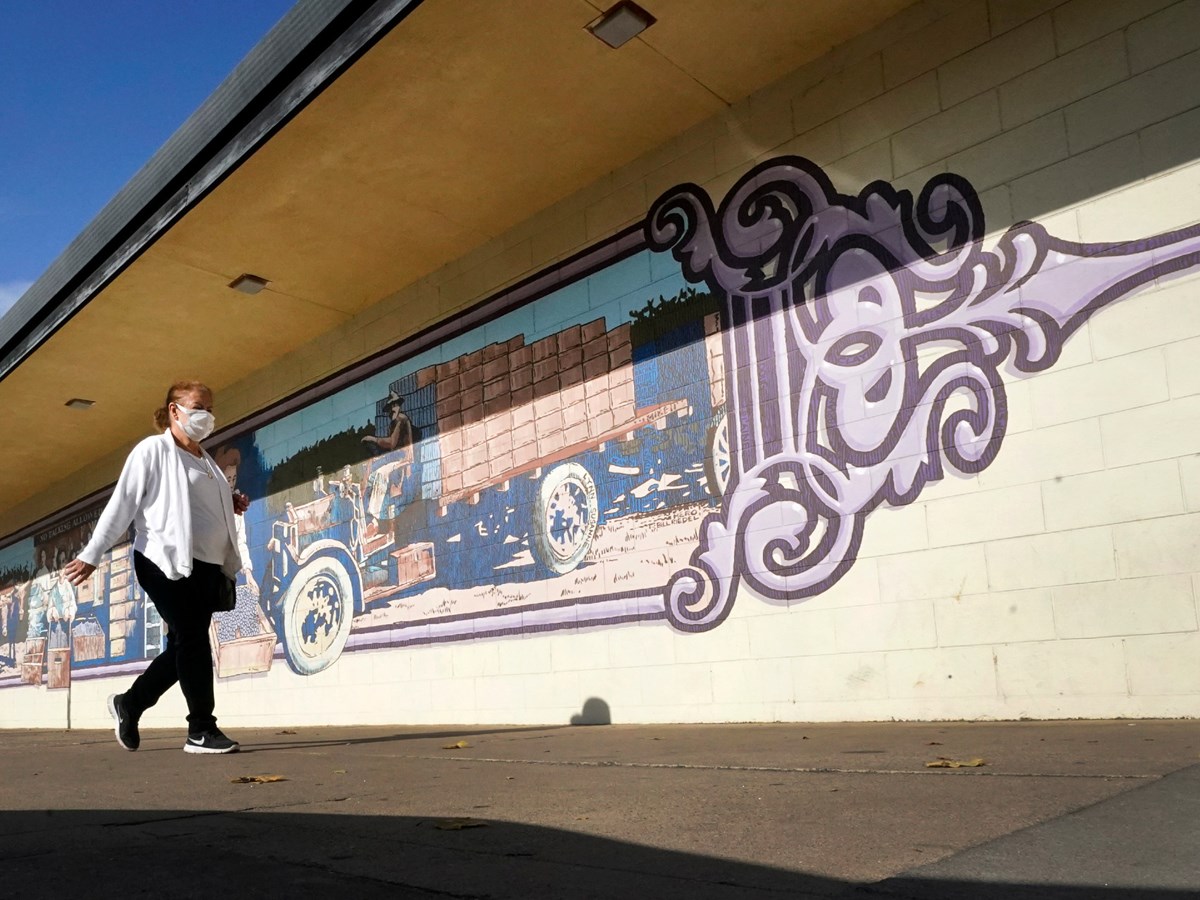 In this Dec. 9, 2020, file photo, a woman wears a face mask as she walks past a mural of the area's agricultural heritage in Lodi, Calif.

California’s independent redistricting commission is preparing to release this week its first official draft maps of new legislative and congressional districts, and residents of San Joaquin County hope they lead to dramatic shifts in how the northern Central Valley county is represented.

After decades of not feeling prioritized by state and federal representatives, community leaders in this booming, urban-rural county are banding together to call for better representation. They want political maps that do not split the county up, as it has been for the past two decades.

“We work with all of our representatives,” said Bruce Blodgett with the county’s farm bureau.  “But we see them touting their great projects they're working on and they're not in San Joaquin County — they're in the other part of the district.”

(What is redistricting? How can you make your voice heard? Read our FAQ.)

The county is currently split into two congressional districts and three Assembly districts. It makes up the bulk of one state senate seat, currently held by Stockton Democrat Susan Eggman.

“To have us get chopped up and served to other communities basically is getting ridiculous,” Blodgett said. “It's time that we have our own representation that is from San Joaquin County.”

Before 2011, the county’s more urban areas were split from its farmlands, resulting in a congressional boundary that snaked through San Joaquin, grouping it with neighboring counties for a decade.

“It got better,” after redistricting in 2011 added the state senate seat and put a greater share of the county into a congressional district, said Betty Wilson with the San Joaquin Business Council. “And you can see ... how that has improved the quality of life for the citizens. We need to have legislators and congressional men or women that know what our community is like.”

But community leaders don’t want to share representation for another decade.

Wilson, Blodgett and a slate of community, religious and business leaders have written to the state’s independent redistricting commission, urging to put the county into one congressional, one state senate and two state assembly districts.

“We are a very unique and diverse community,” Wilson said. “Our issues are not the same as other cities or counties in the state.”

One in 11 jobs in the county are agricultural, and Wilson lists farming, water and a need for better-paying jobs as top priorities for residents.

“It’s a real unique situation where we have this much agriculture still, yet just exploding in terms of population and the diversity of population,” Blodgett said.

San Joaquin County is increasingly diverse, with larger populations of Latino, Black, Asian and Indigenous people than the rest of the state on average. Forty percent of residents speak a language other than English at home, according to the Community Foundation of San Joaquin.

San Joaquin County grew 13.7% since the 2010 census. With just under 780,000 residents, it has enough people to justify getting its own congressional district.

But it’s a tall order for the redistricting commission, which is fielding similar calls from communities across the entire state.

California’s independent commission aims to keep cities and counties together as much as possible, but it also has population and Voting Rights Act rules to follow. Marathon line-drawing meetings have shown that what may seem like a simple edit to a proposed district can have ripple effects across the map.

Recent “visualizations” — or unofficial drafts — by the commission show two of advocates’ three wishes could come true: the county is contained in a single State Senate district and two Assembly districts, but it is split between two U.S. House districts.

The maps will likely undergo changes ahead of the commission’s Nov. 15 deadline for first drafts. The commission is encouraging public feedback before their final deadline on Dec. 27.