The City Council will vote on the plan next Tuesday. If it passes, the 20 priority sites laid out in the plan could be used to house about 3,600 homeless people a year.

“If we just approve one site at a time, we’re going to spend months negotiating, sometimes arguing, with a particular community, and we are going to take one big step forward but too many steps backwards,” Steinberg said during a press conference Wednesday. “And doing nothing is not an alternative.”

Steinberg proposed a $100 million investment over the next two years to support the plan’s implementation. Still, questions remain about the sites locations, many of which are unequally distributed across the city and aren’t in more wealthy areas like Curtis Park, Land Park, Natomas or even the mayor’s own Pocket neighborhood.

Those sites, paired with the capacity of existing shelters and the expansion of programs like motel and housing vouchers, would help almost 10,000 people “begin their way out of homelessness,” the plan estimates.

The locations would be a combination of temporary housing solutions, “safe parking” where unhoused people living in cars can stay overnight and tiny homes that serve as permanent housing.

“We want the public to know that we intend to build safe communities for our homeless population that are of quality — that safe ground, safe camping doesn’t have to mean REI tents and encampments that we’re used to seeing around town,” Steinberg said.

In an email, county spokesperson Janna Haynes said county staff are reviewing the recently released plan and are looking forward to meeting with the city to learn more about next steps.

“There is no one-size-fits-all solution and we work hard to meet people where they are to determine the best solution for their needs,” Haynes wrote. “We welcome continued collaboration with all our partners in our fight to end homelessness in Sacramento County.”

Early this year, Steinberg asked each council member to get community input and find possible sites within their districts that could be included in the master plan.

But the distribution of those locations is not evenly spread across the city, and many are concentrated in the city’s underserved neighborhoods. Areas like Natomas don’t have any sites listed on the siting plan, whereas almost half of the locations are in neighborhoods south of Fruitridge Road.

The mayor acknowledged the sites wouldn’t be perfectly distributed across the city but said that working toward perfection would slow down implementation.

“Never let the perfect be the enemy of the great,” he said.

District 1 — which includes neighborhoods like Natomas — doesn’t have any priority sites listed, but Councilmember Angelique Ashby said she is working on converting a hotel in that area into a family shelter.

To her, that was the most outstanding gap with regard to housing services.

“The only reason I’m not putting the exact dot on the map yet is that I don’t want to jeopardize it,” she said. “I want to be more precise, more surgical, I want to be successful with it. The site’s already selected, but it’s almost there and I hope to be the first in line for funding.”

Several of the existing recently built shelter facilities mentioned in the report are in areas with high populations of people of color, such as Meadowview and Hagginwood.

Faye Wilson Kennedy from the Poor Peoples’ Campaign said that historically, wealthier communities have wanted other communities to shoulder the lion’s share of responsibility in providing services and sites for often low-income, Black and brown communities.

“Solutions need to be spread throughout all communities — one community shouldn’t bear the burden,” she said.

Meanwhile, Bob Erlenbusch, who leads the Sacramento Regional Coalition to End Homelessness (SRCEH), said that homeless peoples’ voices were underrepresented in the decisions.

“I do know that at the community meetings that I attended, service providers did make an effort to bring the voices of people who are currently homeless to the table,” he said. “But it’s hard when the meetings are at 6 o’clock on Zoom and hard for people to access.”

A central question remains: Where do people go? 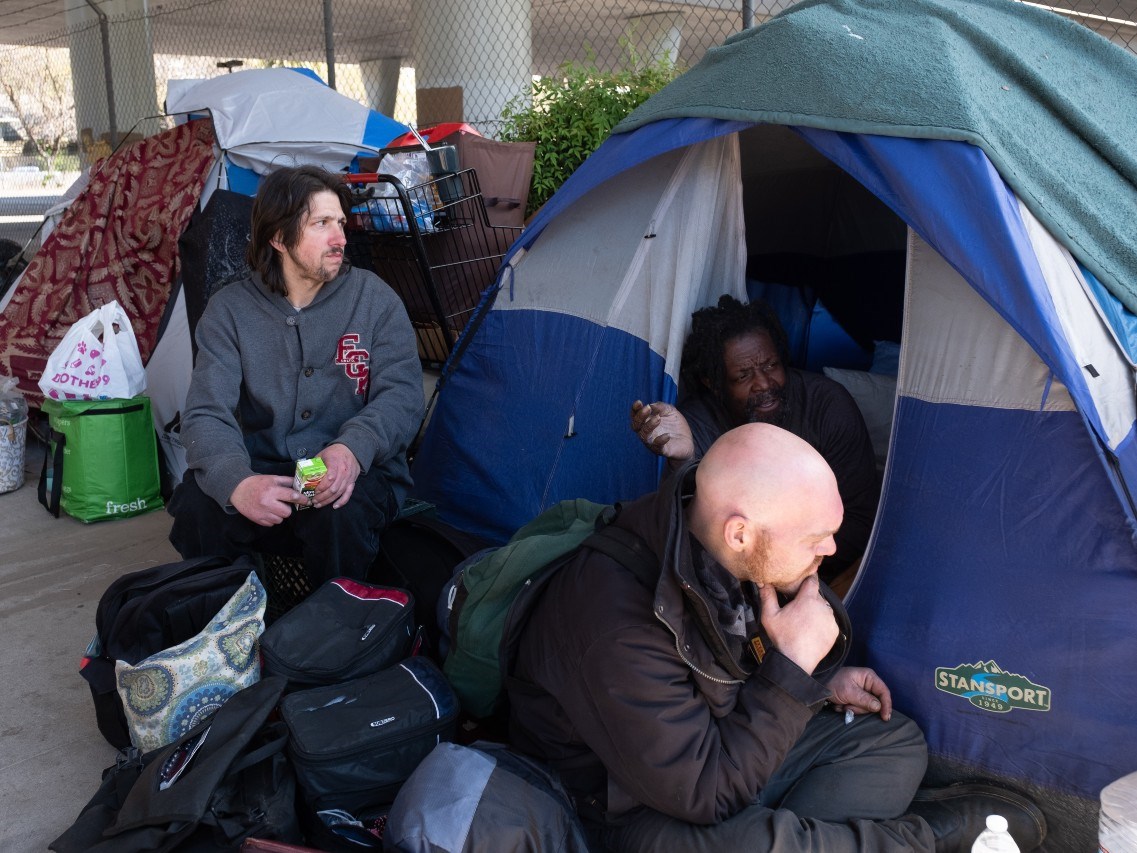 Before the council committed to creating and voting on a siting plan, District 4 Councilmember Katie Valenzuela created a District 4-specific task force with community members, local organizations and business owners to discuss solutions to homelessness within Sacramento at large.

During those meetings, she said the central question wasn’t pitting unhoused people against housed people or against businesses, but instead it was “where do people go?”

“It’s really all of us against a system that fundamentally isn’t working,” she said. “All we're doing is moving people around without really addressing the root cause of the problem, which is that folks have no place to go.”

While the sites are a starting point for providing shelter, Erlenbusch said that he’d like to see — sooner rather than later — the city’s plan to provide truly affordable and accessible housing for people.

The master plan anticipates that people will cycle out of the proposed temporary housing every 6 months.

“It’s one thing to say that there’s gonna be a turnover every six months, at least in theory,” he said. “But where do those people go?”

SRCEH presented a Community Master Plan to the city council in May, and Erlenbusch said they are working on a side-by-side comparison with that and Mayor Steinberg’s proposal.

One need Erlenbusch identified — along with additional affordable housing solutions — was accessibility. He hopes that the sites will be built along stops for public transportation.

During the press conference announcing the proposal, Steinberg didn’t provide specifics about transportation services that would be offered, but said “we need to involve regional transit” and that one of the underlying principles of implementation was “bringing services to the sites and the people.”

The master plan sets an expectation that transportation will be provided to unhoused people through a variety of means, suggesting service providers drive clients to a site or use shuttle service, bus passes or car services to offer access to services.

Wilson Kennedy, who also worked with SRCEH to present the Community Master Plan, said that though she commended policymakers for working to address homelessness, the end goal should be getting people housed in places with amenities — not just to provide safe ground and parking.

To her, the master plan is just one piece of housing homeless people.

“You have to look at it from a holistic perspective, we have to look at the whole infrastructure,” she said. “Until we do that, it’s going to be a vicious cycle until we come up with policy and work together with those institutions — schools, employers — it can’t just be the city doing it.”

At the end of June, Steinberg proposed a duo of first-in-the-nation rights: a right to housing for those living outdoors and an obligation for those people to accept housing when offered.

He said he planned to pursue that after the city voted on the master siting plan.