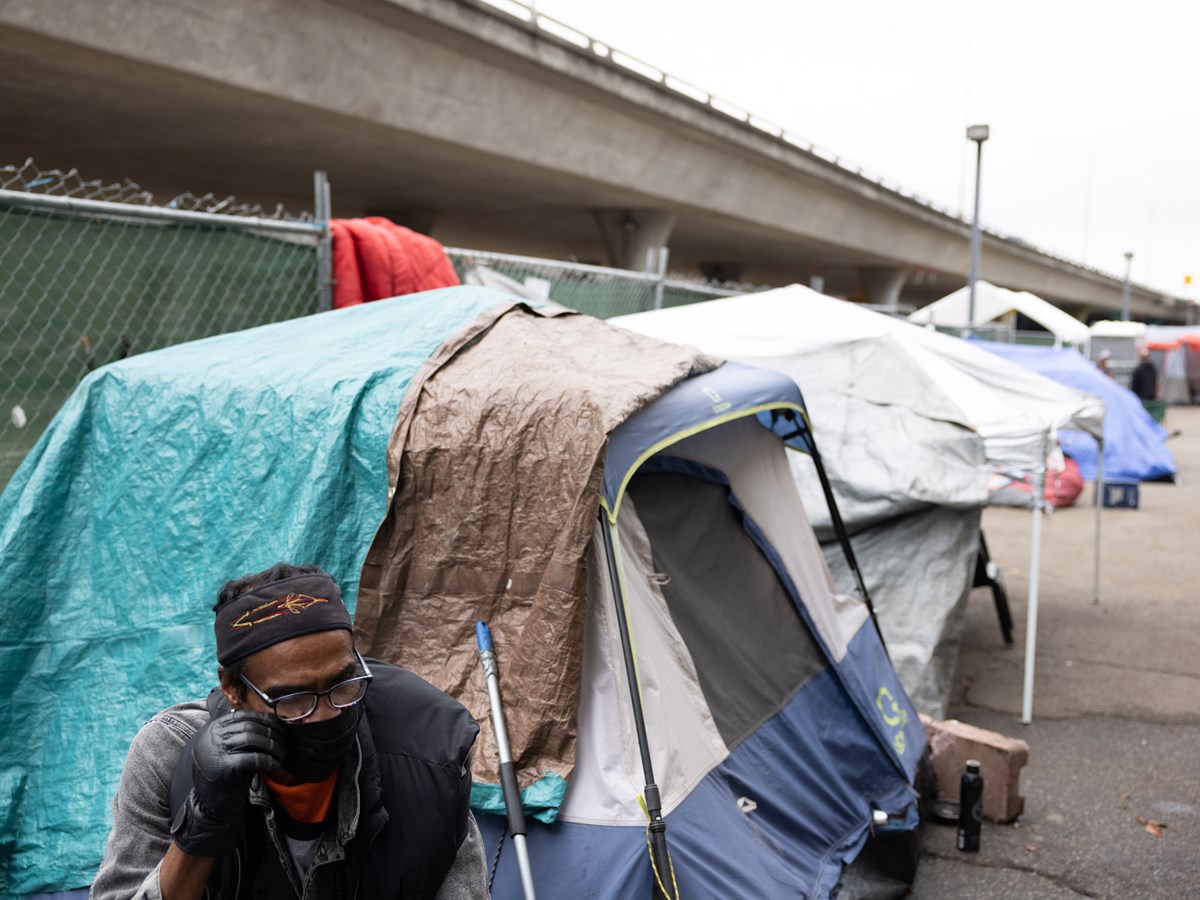 Since the city of Sacramento opened its first sanctioned campsite for unhoused individuals in the spring, staff there have been striving to get people what they need — whether a meal, medical appointment or connection to permanent housing.

But for the 140 people sleeping in a parking lot on the south end of downtown near Highway 50, real shelter seems like a pipe dream. And just getting by is a daily challenge.

The site is scheduled to close in December, according to Nick Golling, program manager in the city’s office of homeless services. Additional safe ground sites are not yet open, and residents and advocates say the city needs to move faster to get people inside before the cold, wet weather worsens. 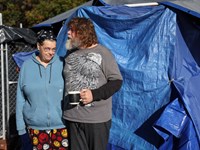 Bob Erlenbusch, executive director of the Sacramento Regional Coalition to End Homelessness, says the recent storm was a reminder of the population’s vulnerability. Last winter, four unhoused people died in the elements.

“We can’t repeat that tragedy. Ever,” Erlenbusch said.

In August, the city approved a site map for 20 more safe ground locations. But it has not been able to provide a ballpark opening date for any of them. Erlenbusch says he’s doubtful new sites will open by winter. 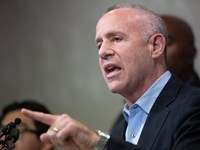 Safe ground locations offer people experiencing homelessness a place to legally sleep outside without fear of eviction. Some sites are for vehicles, while others are for mobile homes, cars and tents. So far two locations are up and running: a vehicle site on Front Street and a combination site across from Southside Park.

The sites are considered “low barrier,” which means residents can bring their pets and all of their belongings, and they can come and go as they please. They can be struggling with a mental illness or an addiction so long as they don’t partake in substances while at camp.

Golling with the city of Sacramento says the biggest goal of the program is to get people who weren’t previously connected to the homeless services system on a path toward more permanent housing. As of Oct. 20, the two Safe Ground sites have served 453 people, and just under a quarter of them have moved to a new living situation. That number includes people who moved to an emergency shelter.

“It’ is an imperfect response. It’s an emergency response,” Golling said. “It’s doing the best we can with what we have.”

Erlenbusch says while it’s a plus to have people engaging with services, he doesn’t think they’re getting comprehensive help.

“It’s not what the community was promised,” he said. “It wasn’t what our unhoused neighbors were promised at the beginning of this process.”

‘They let me live here’

The X Street safe ground site is directly under Highway 50, also known as the W/X freeway, between Sixth and Eighth streets across from Southside Park. Behind a chain link fence are portable toilets and handwashing stations flanked by rows of tents, which stretch to each end of the parking lot. Another lot contains spaces for vehicles and mobile homes.

Joseph Pacheco has been overseeing the site through his work with nonprofit First Step Communities. He says the lots are almost always full, but they can sometimes take new clients on a walk-up basis. If someone shows up and they can make room, they do.

“There’s a central area where we can meet, greet, and orient them to the program,” he said. “And get them working with our case managers and see what their goals are and what their needs are before they come out into the lots.”

Residents get a cold lunch and a hot dinner each day, plus any other meals or snacks that arrive through community donations. A nonprofit brings a showering station onsite weekly. There are Friday night meetings for those battling addiction. Residents can come and go as they please, but outsiders are not allowed.

“They let me live here, ya know,” said Gregory Garrison, a 61-year-old resident who’s been at the site about three months. “You get plenty of food here, they give you clothes and stuff like that. Every day, it’s something new.” 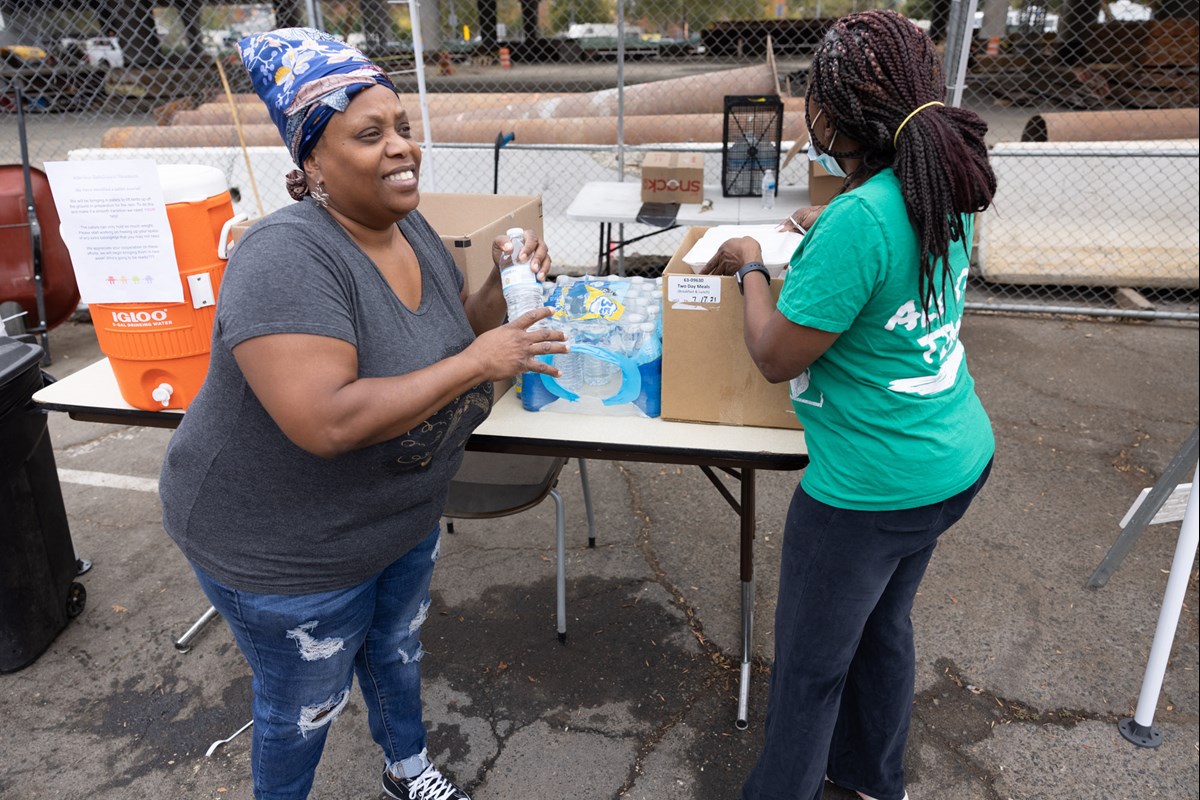 Everyone who is assigned a spot gets entered into a federal database called the Homeless Management Information System, which tracks an individual's history, services received and ongoing needs.

Golling says 70% of safe ground residents had not been entered into this system before going through the intake process.

“We’re excited that it’s here,” he said. “So we can have a general idea of what homelessness looks like in Sacramento.”

A small, rainbow-colored pinwheel marks Kirsten Bolles’ corner spot near the fence. She and her husband used plastic piping, tarps and other found materials to build a canopy over their camping tent, creating a covered area for their chairs, table and cooking station.

“We tend to try and keep things that are useful,” she said.

Since the couple arrived in July, Bolles says they’ve spent almost every day on the phone or at an appointment. She has a connective tissue disorder called Ehlers-Danlos syndrome, and her husband has a traumatic brain injury. She says they haven’t been able to find permanent housing or adequate medical help.

“There’s so much on the lot everybody’s trying to cover at once, and they’re trying to learn their staffing needs,” Bolles said of the safe ground program. “They’re stretched so thin, still.”

“They don’t have the staff,” he said. “The money has not been there to provide the behavioral health services that are desperately needed.”

The city has four staff members on site at all times at the Southside Park encampment, and a Sacramento County clinician comes onsite weekly to address mental health, substance abuse and other medical needs.

“Each site will be staffed, and services offered based on the needs of those being served and the size of the location,” Golling said in an email. “We will be working with the county to collaboratively support these locations as well as community-based organizations in those areas.”

No matter where you go on the site, the noise from the highway construction is constant. Caltrans is doing a major overhaul of the highway, and there are jackhammers and other power tools, layered on top of the everyday whoosh of traffic. 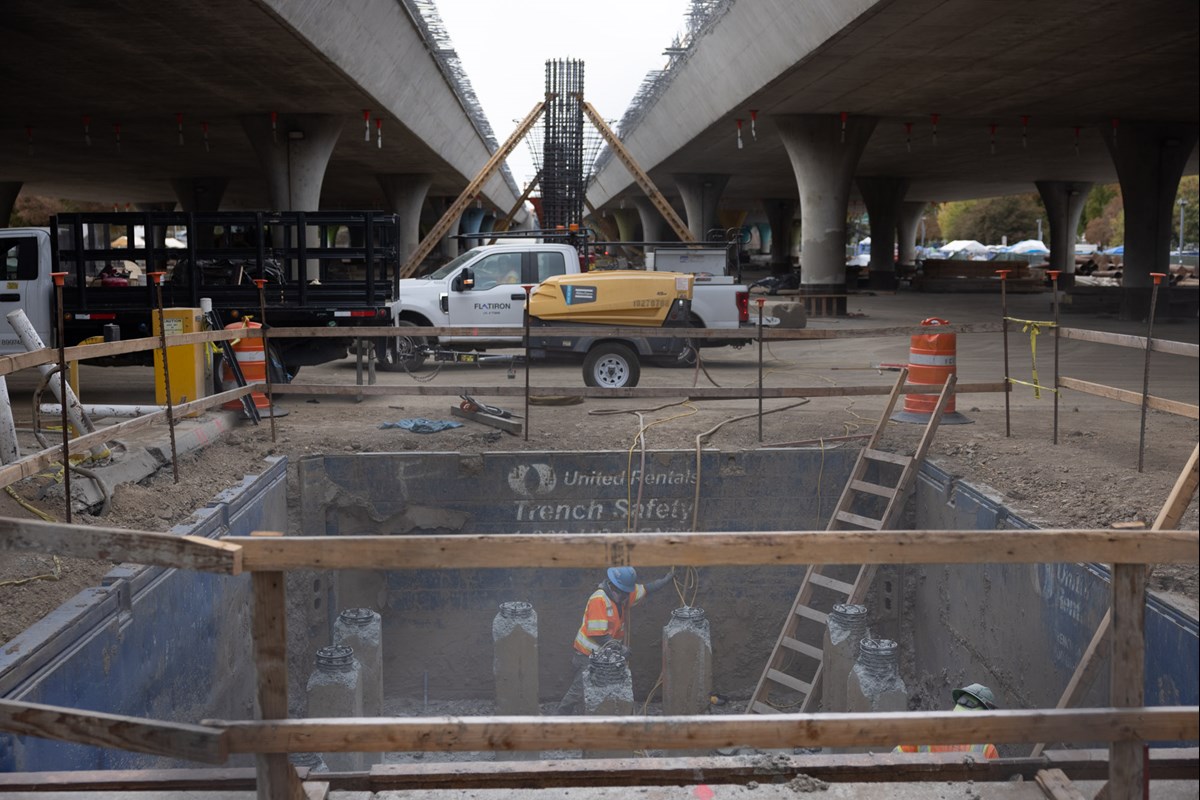 Construction on and below the WX in Downtown Sacramento continues Oct. 20, 2021.Andrew Nixon / CapRadio

“Being here takes a toll, in focus if nothing else,” Bolles said. “There’s a constant onslaught.”

She says it usually stops at night, but during the day it’s “never a consistent type or volume level, so you can’t really adapt to it.” She recalls at least one occasion where construction began at 3 a.m.

On the days she’s not taking care of something for herself or her husband, Bolles says she tries to check in on her neighbors. She says she recently connected someone with a new walker after theirs was stolen.

“There’s always somebody on the lot that needs help with something, and it’s usually not a crisis,” she said.

Golling with the city of Sacramento says the average length of stay for safe ground residents is around 85 days.

But for anyone coming onsite now, it will have to be shorter. The city is closing the X Street location at the end of December because of the Caltrans construction schedule. The city could not provide an exact date.

Advocates are hopeful that a different city-sanctioned site will open by then, and that people living at the X street site can move there. But Erlenbusch says he expects the full roll-out of this program to take “an unusually long time.”

“You need respite centers, you need to keep moving on the safe grounds and safe parking, and you need to start working on creating affordable housing,” he said.

City Councilmember Katie Valenzuela is proposing an additional safe ground site near the Sierra Health Foundation on Garden Highway. The city says they’re looking at it, but it’s not definite yet.