Pro-Trump demonstrators march near the Capitol on Jan. 6, 2021.

Stay connected with CapRadio today and tomorrow for all the latest on the electoral college ratification, the protests at the U.S. and California Capitols, and the Georgia Senate results. When breaking news happens, find updates at capradio.org or stream NPR and CapRadio live right here.

A large crowd of President Trump supporters converged on California’s Capitol building on Wednesday, chanting “stop the steal” and waving banners in protest of Congress’ scheduled certification of the Electoral College count. The group was met by a multi-agency law enforcement presence and a smaller group of counter-protesters.

But while violent supporters of the president stormed the U.S. Capitol in Washington, D.C., individuals in California’s capital did not breach the statehouse or engage in widespread violence. 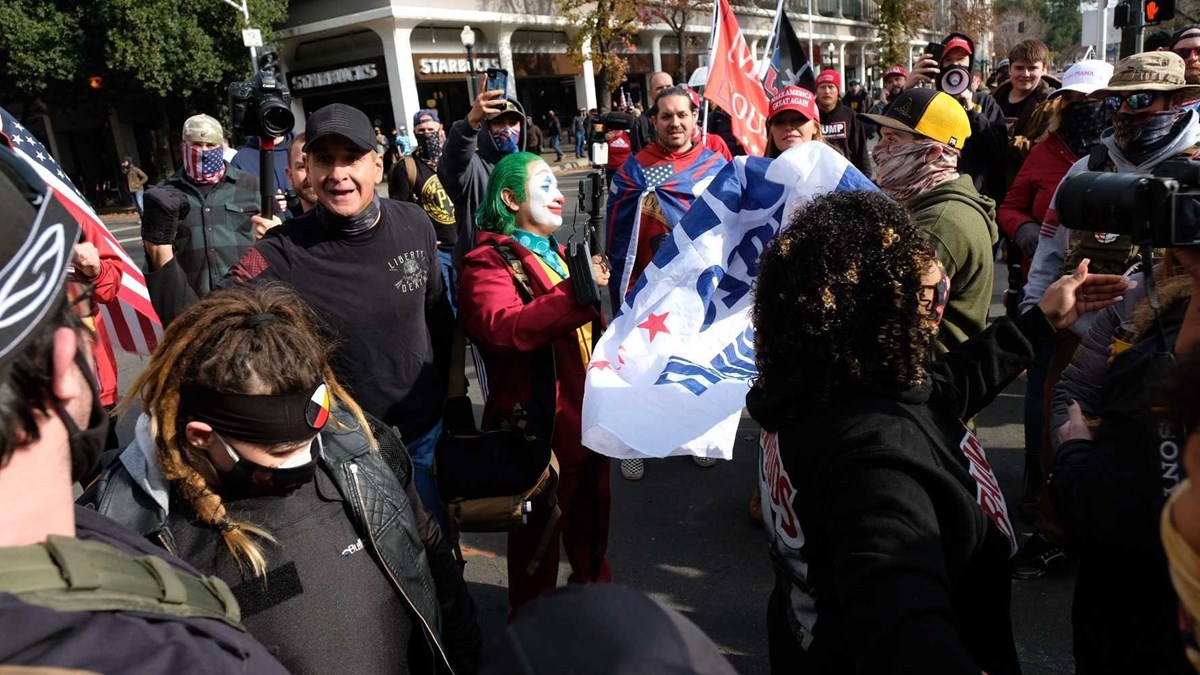 People wearing red “MAGA” hats — along with others affiliated with groups such as the Proud Boys, the three percenters and a campaign to recall California Gov. Gavin Newsom — listened to an amplified feed of President Trump’s morning speech.

Sacramento Police Department and California Highway Patrol officers blocked several streets off for the protesters, while caravans of cars drove around the Capitol blaring their horns.

But unlike the violent insurrection that stormed the U.S. Capitol, activity at California’s statehouse was relatively calm in the morning. Shouts of insults and threats were tossed but there was no physical violence. 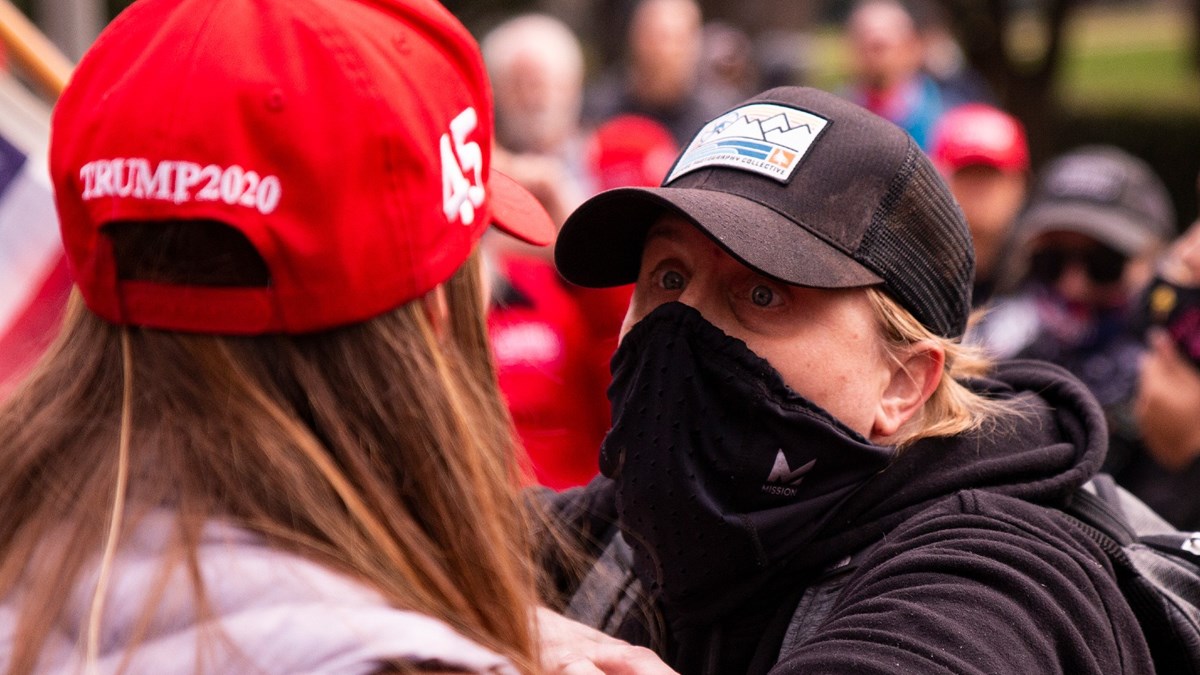 Demonstrators at a pro-Trump protest in downtown Sacramento on Jan. 6, 2021.Kris Hooks/CapRadio

By the early afternoon, tensions increased. Members of the Proud Boys and counter-protesters started throwing punches. One person was sprayed in the face with mace.

Sacramento police surrounded counter-protesters, escorting them away from the Proud Boys and President Trump supporters.

Another physical confrontation between protesters in the early afternoon left two needing medical attention. Police detained two other protesters for carrying too much mace, but were quickly released. At least two others were later detained, cited and released. 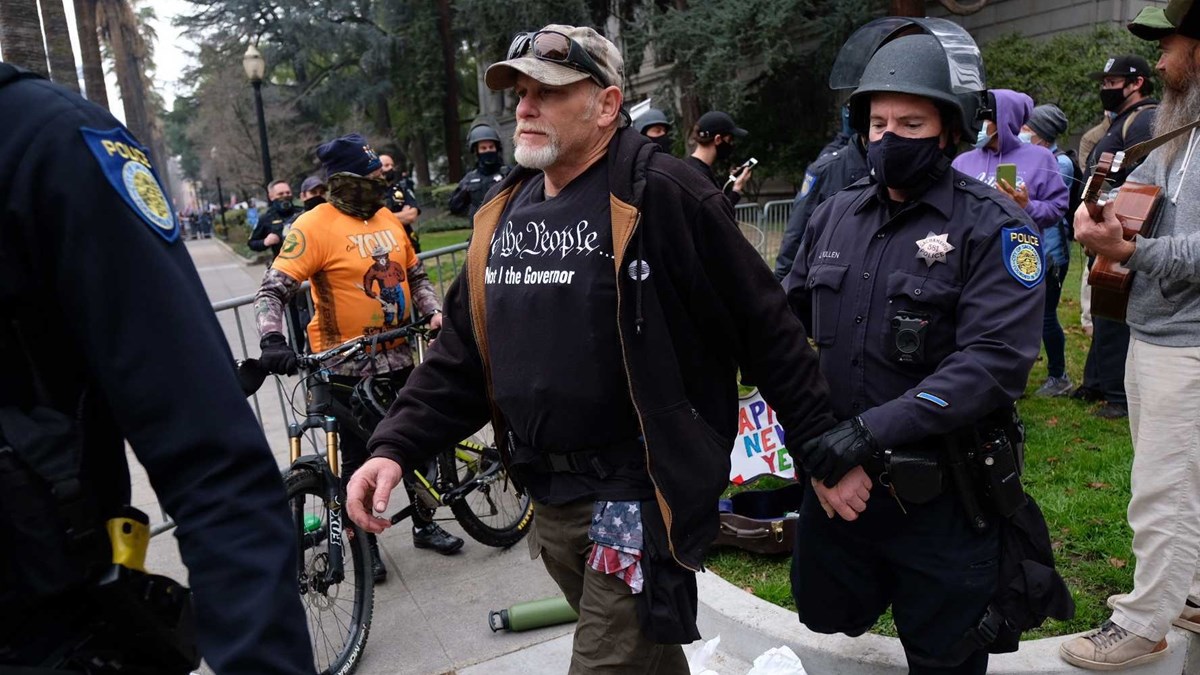 A demonstrator is detained and released after questioning at a pro-Trump rally in downtown Sacramento on Jan. 6, 2021.Andrew Nixon / CapRadio

The Sacramento Police Department confirmed on Twitter that people were arrested today for carrying pepper spray.

“Heavy police presence remains in the area of the Capitol,” the Sacramento police shared in a tweet.

One guy shouting over megaphone: “There are only two genders”(?) pic.twitter.com/vXEuGDi6nF

The protest in Sacramento follows weeks of similar demonstrations at the Capitol, mostly drawing crowds on Saturdays and resulting in violent brawls, arrests and minor injuries for police officers.

The demonstrators at these events claim the election has been “stolen” from President Donald Trump, a claim that has been rejected by numerous judges across the country — including, most recently, justices on the U.S. Supreme Court.

“There’s just way too many things that aren’t adding up,” said Sherry, a President Trump supporter who declined to give her last name. “So we need to stop and recount everything. To verify that — if Biden won, so be it. It’s really not about Biden or Trump. It’s about having the integrity of our vote so that the next time I go out and vote, two years from now, I can be assured that it’s a fair vote — a fair count.” 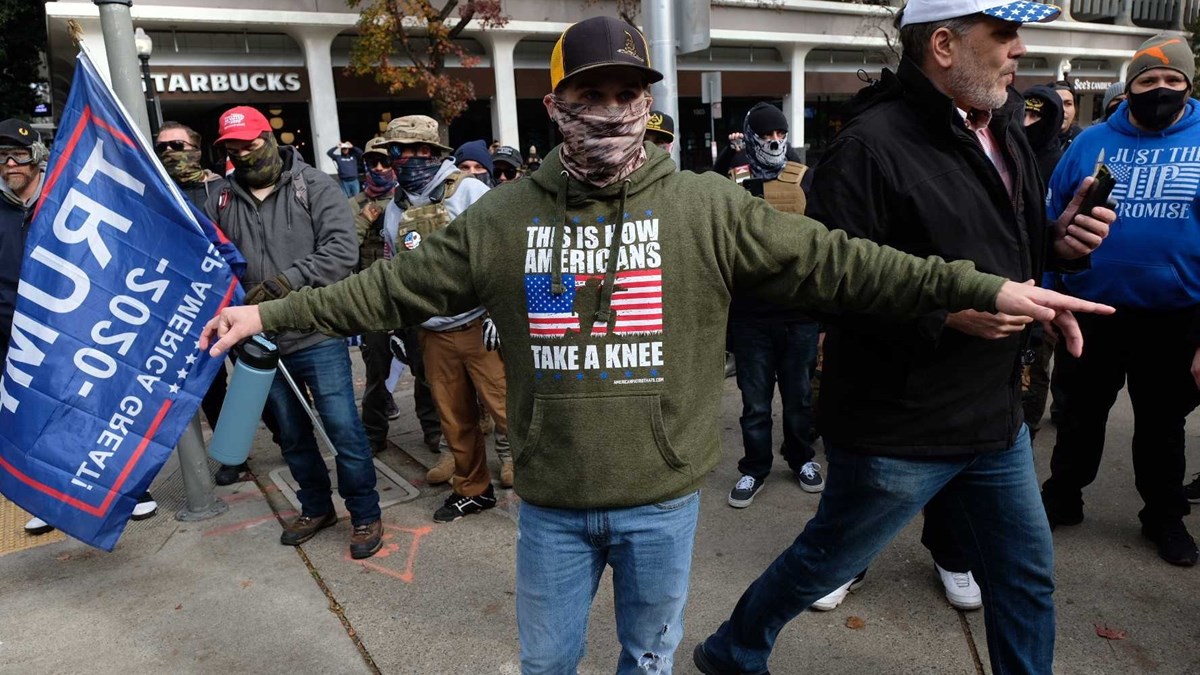 Rachel Dick, nurse at a hospital in the Bay Area, acknowledged the seriousness of COVID-19, but says government should not be mandating masks or requiring stay-at-home orders

“It’s a serious virus, but to infringe on our freedoms this much for a virus that has such a high survival rate,” Dick said, “I’m just wondering if this is a primer for something else. If this is just the beginning, freedom is very easy to give away — it’s not that easy to get back.”

This story will be updated.