“This is the California model spreading across the country. When you need to flip things blue there’s always some mysterious mail-in ballots lying around that’ll do the trick. Shameful!”

A provocative but unfounded post from conservative commentator Tomi Lahren has gone viral on Facebook suggesting key states in the presidential race are starting to “flip blue” due to a fraudulent mail-in voting system such as the one used in California.

“This is the California model spreading across the country. When you need to flip things blue there’s always some mysterious mail-in ballots lying around that’ll do the trick. Shameful!” 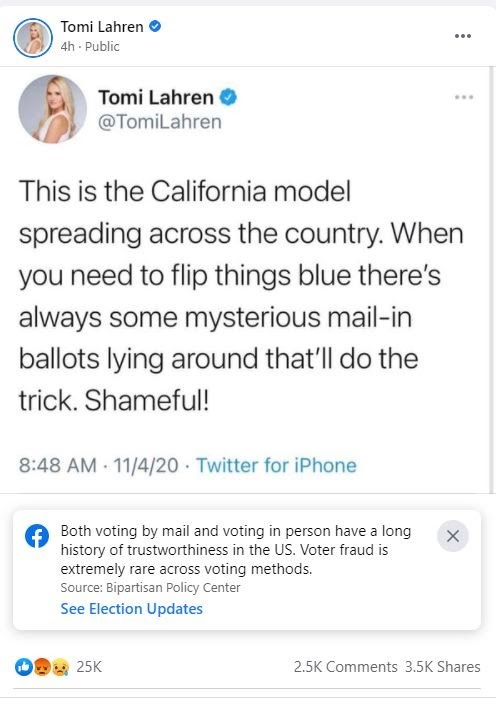 The post was flagged as part of Facebook’s effort to combat false news and misinformation on its News Feed. (Read more about PolitiFact California’s partnership with Facebook.) It received more than 700,000 views and 25,000 likes on the platform by early Wednesday afternoon.

Facebook added a warning label at the bottom of the post citing the trustworthiness of voting by mail.

With the nation’s focus on the still-undetermined presidential race, we set out to fact check Lahren’s claim.

A ‘False And Unsupported Statement’

Several battleground states were legally not allowed to tally mail-in votes before Election Day. That meant many votes from Democrats, who relied much more heavily on mail-in voting, were reported after figures from Tuesday’s in-person voting, which Republicans relied on in greater numbers.

Officials in those states have not cited evidence that unexplained mail-in ballots are turning states “blue.”

“There is no support for the claim that ballots ‘lying around’ are mysteriously included in the count. This is a false and unsupported statement,” Rick Hasen, a UC Irvine law professor and elections expert, wrote in an email, referring to both the contested states and California.

“Despite all of the complaints about third party collection of ballots (sometimes referred to pejoratively as ‘ballot harvesting’) there has been no evidence of any widespread fraud with mail in ballots in California elections,” he added.

Republicans in 2018 criticized a new state law that allows anyone, even campaign workers, to collect and return mail-in ballots, which they dubbed “ballot harvesting.”

Asked about Lahren’s post, Sam Mahood, a spokesperson for the California Secretary of State’s Office, said it “offers no evidence.”

“Voting-by-mail has been popular in red, blue, and purple states for years. It’s a secure and transparent process. Vote counting is open to the public and campaigns to view,” Mahood wrote.

He added there’s been no indication of any large-scale fraud tied to mail-in voting during the current election.

For longtime California voters, there’s nothing “mysterious” about mail-in ballots. Voters of all political stripes have used them safely and securely for decades to help both Democrats and Republicans win.

The process — traditionally called absentee voting and now more commonly called mail-in voting or vote-by-mail — has been allowed for anyone who’s registered, and for any reason, since 1979, according to the California Voter Foundation. A record 72% of votes cast in the California primary were by mail, a figure that’s expected to be surpassed once all the state’s general election ballots are counted in the weeks ahead.

Mail-in ballots, in fact, were instrumental in the May special election victory by Republican Rep. Mike Garcia in northern Los Angeles County, undercutting the repeated claim by President Donald Trump that they favor Democrats and lead to corruption.

Election experts, along with state and county election officials and numerous studies have all rejected claims that mail-in ballots lead to widespread fraud. The studies include a 5-year investigation by the George W. Bush administration that turned up virtually no evidence of any organized effort to skew federal elections.

There have been cases of voters trying to cheat using mail-in ballots, but experts say it’s not systemic. When it happens, it gets caught.

"Election fraud of all sorts is rare. There is a slightly less rare instance of voter fraud by absentee balloting," Charles Stewart, co-director of the Caltech/MIT Voting Technology Project, which analyzes election systems, told us in June. "There are greater temptations and opportunities. Nonetheless, they are rare."

Stewart pointed to one exception: A Miami mayoral election in 1998 "that ended up being full of mail ballot fraud."

More recently, Justin Levitt, a professor at the Loyola Law School in Los Angeles, examined United States elections from 2000 to 2014. He found just 31 credible incidents of voter fraud of any kind over that period, during which more than a billion votes were cast.

There’s no evidence that election officials discovered new or illegal ballots “lying around” after Election Day. Several battleground states where early results from Tuesday’s in-person vote favored President Trump continued counting legally-voted mail-in ballots Tuesday night and Wednesday. Those ballots can take longer to count and some states were prohibited from starting to tally them until Tuesday.

Election experts and county election officials along with numerous studies have rejected the idea that mail-in ballots in California or any other state lead to widespread fraud.

Lahren’s post is making waves on social media. But it’s not backed up by the facts. 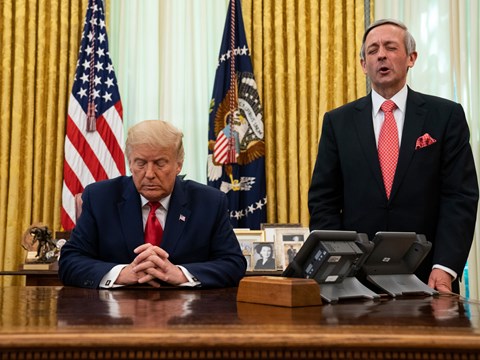