During normal times, the concrete alleyway behind the Cathedral of the Blessed Sacrament in downtown Sacramento goes unnoticed. Cars and delivery trucks pass through, crows fly over at dusk and unhoused people use it to sleep at night.

But since July, when California issued a ban on indoor religious services in many counties to stop the spread of the coronavirus, the strip of Jazz Alley has been a place for worship.

One recent Sunday morning, about 100 Catholics gathered six-feet-apart in the corridor for a 7:30 a.m. mass.

Some stand in a nearby parking structure. Others are in the parking spaces usually used by church staff. They sing faintly, behind masks, using disposable pamphlets as prayer guides.

Father Michael O’Reilly preaches from a fire escape, three stories above them.

“I’m a little afraid of heights,” said O’Reilly, rector of the Sacramento Cathedral.

But at the same time, he praises the opportunity. “It gives me a new perspective on the congregation here,” he added.

Rather than a choir, a solo vocalist leads songs from the second-floor fire escape, far away from parishioners.

Maria Balakshin, who has been attending mass at the Cathedral of the Blessed Sacrament since the late 1990s, says she misses the beauty of the interior of the church. But she says it’s been “special” having mass outside.

“Even though we’re in an alleyway, they’ve made it as attractive as possible,” she said. 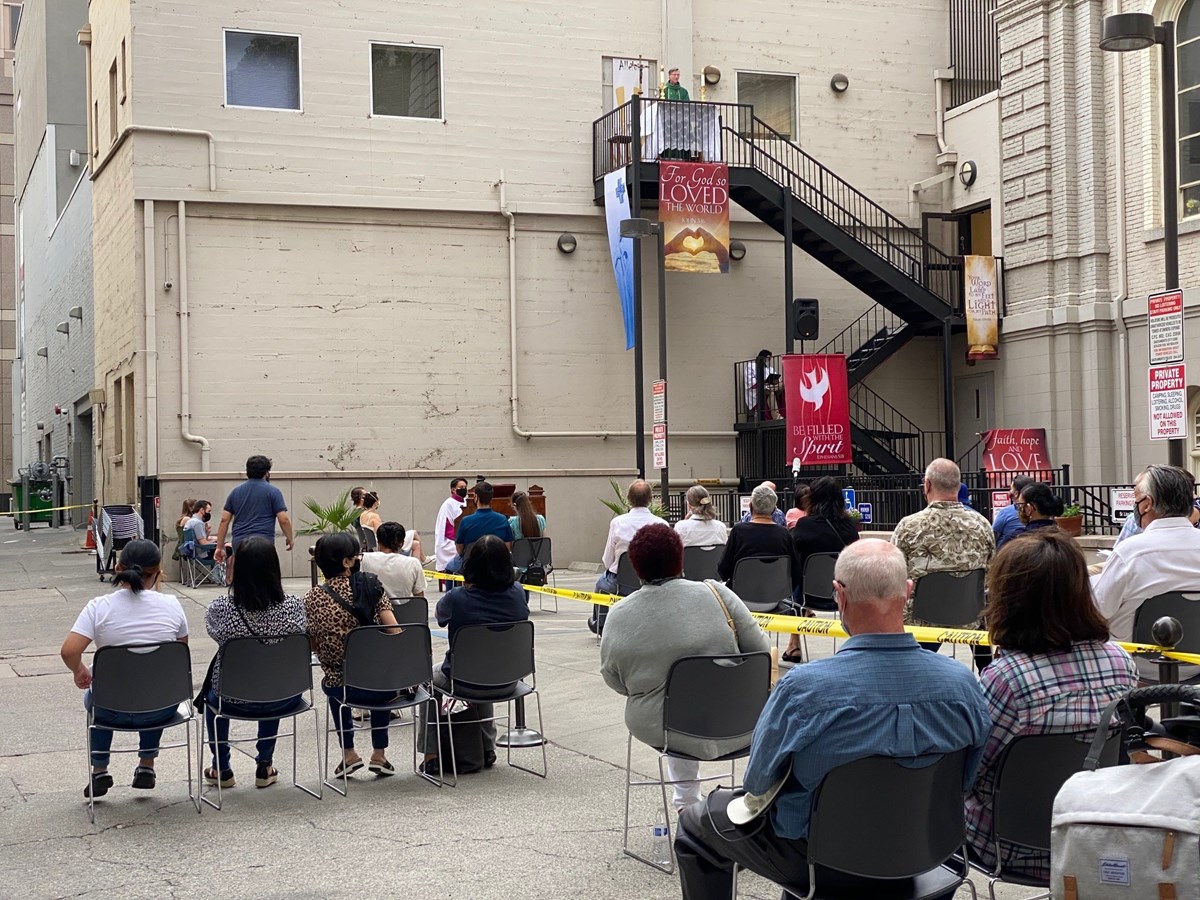 Parishioners of Cathedral of the Blessed Sacrament in Sacramento, California attend Sunday mass outdoors while indoor worship is prohibited during the COVID-19 pandemic.Pauline Bartolone / CapRadio

After California announced in July that counties on the state’s watch list would not be allowed to have indoor worship services, Sacramento’s bishop said Catholics could worship outdoors in affected counties.

Modern-day Catholic worship rarely happens outdoors. Canon law says communion, where the faithful ingest what they believe to be the body of Christ, must be celebrated in a sacred space, except when specific circumstances require otherwise.

Religious experts say mass has been given outside when large crowds gather to see the pope, or to accommodate migrant workers and soldiers during wartime.

But normally, priests need to “make a good case” to offer a mass outside of church in the Sacramento Diocese, says Father Brian Atienza, who helps write rules for the Bishop.

“If it’s necessary to move it elsewhere, you can seek permission, but you have to make sure that the dignity of the sacrament is preserved, and maintained and respected,” he said.

Susan Abraham, professor of Theology at the Pacific School of Religion in Berkeley, says outdoor mass is not embraced by the Catholic church during normal times in part because there can be many distractions away from the service.

“There is a certain precision in the way the rituals and the sacraments are celebrated,” Abraham said. “There is a wondering, ‘Will the going-to-the-outdoors compromise this precision?’ And I would say that is a legitimate worry. ”

For example, she says, most parishioners would be “aghast” at the idea of the holy wafer getting blown away in the wind or being soaked in a rainstorm. 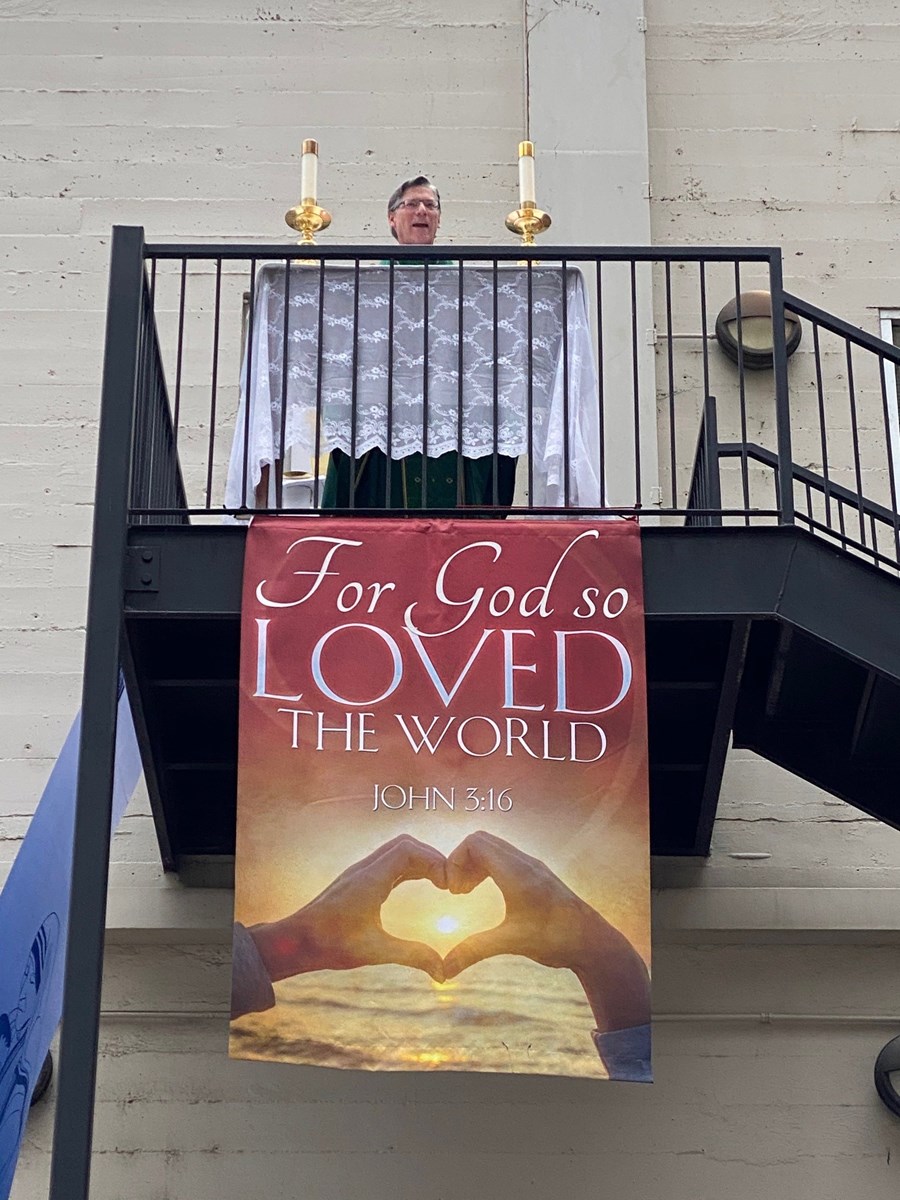 Father Michael O'Reilly preaches from a third-floor fire escape in a Sacramento alley while indoor worship services are prohibited under COVID-19.Pauline Bartolone / CapRadio

Abraham, a Catholic herself, says the weekly experience of physically being in a church is meant to remind the faithful of God’s holiness. But the pandemic is a good time to rethink that.

“I am not a fan of understanding only the church as a holy place or holy space,” she said. “This is a new time for us to think about time and space in a far more expansive way.”

During an August mass behind Sacramento’s cathedral, candles burned in the light of day. An organ filled the alleyway with music. Father O’Reilly preached about not letting anything get in the way of being close to God, not even a “virus.”

Some parishioners kneeled on the cement pavement as they worshiped.

“To me, personally it is more intimate,” she said. “The people who are here are really true Christians who want to practice their faith.”

This congregation’s prayers may be making this alley more sacred during the pandemic. But when it ends, they’ll likely go back to church as usual in the Cathedral.