While dancing a sinister tarantella at a recent rehearsal, the pirates of Sutter Street Theatre’s “Peter Pan” circled around one another without joining hands or elbows. They donned cloth face coverings along with striped shirts, stocking caps and plastic swords.

The Folsom company is rehearsing two youth productions on a makeshift stage in the parking lot of their warehouse, which is typically used for building and storing sets. Like other amateur and professional theatres across the Sacramento region, they’re trying their best to stay afloat as a COVID-19 surge keeps curtains closed at indoor performance venues.

Director Alison Gilbreath said she was disheartened when the company had to stop rehearsing in their black box theatre in downtown Folsom. She wasn’t sure how their two youth shows, “Peter Pan” and “Sweeney Todd,” could continue.

“I said ‘that’s it, I don’t think we can do the show’ … and we scrambled, scrambled,” Gilbreath said, “and then we’re like ‘let’s take it outside.’”

The cast of “Peter Pan” practices in the mornings, while the cast of “Sweeney Todd” uses the space after the hottest hours of the day. Everyone gets a temperature check at the start of rehearsal.

Gilbreath says the face coverings have been an artistic challenge. In “Sweeney Todd,” a dark comedy set in Victorian London, Gilbreath has the actors reference a plague, creating context for the masks.

But changing “Peter Pan,” however slightly, is more difficult, she said.

“When they’re in a big group singing together, they wear their masks. When it’s just a few of them in major, they drop them,” Gilbreath said. “In major” is a theatre term for “center of attention.”

Many of the child actors tucked their face coverings below their chins to sing during a recent “Peter Pan” rehearsal, but Gilbreath says they’re generally pretty good about keeping them on fully, as public health experts recommend. Scientists say group singing is a risky activity because all of the inhaling and exhaling. 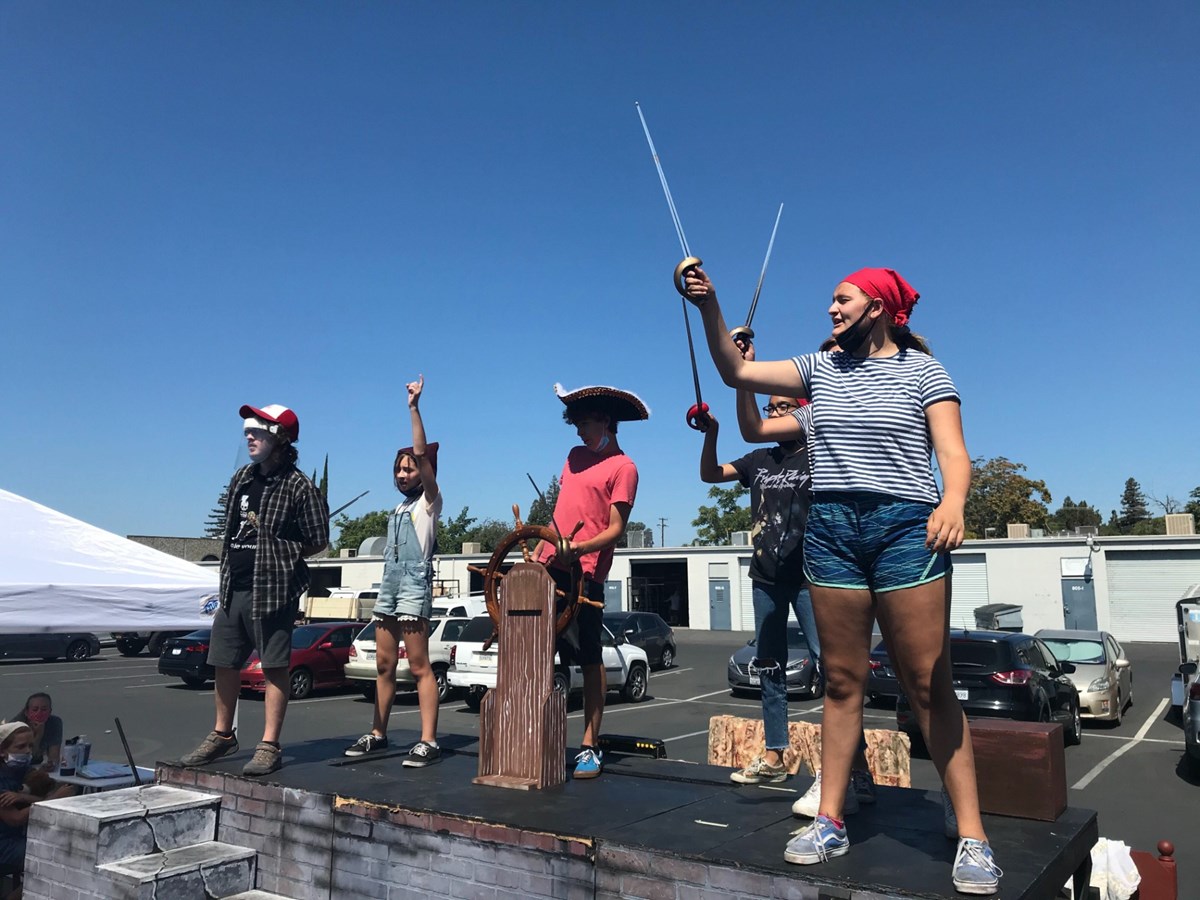 Young actors rehearse a scene in Sutter Street Theatre’s “Peter Pan” with their masks tucked under their chins.Sammy Caiola / CapRadio

Gilbreath said even though some parents opted to take their children out of the show, the community has been largely supportive of the effort.

Both “Peter Pan” and “Sweeney Todd” will be performed this month in the courtyard of a local restaurant, with patrons from the same households seated together. Tickets are reserved for loved ones and are not being sold to the public.

Theatres throughout the Sacramento area are canceling their regular seasons and finding other ways to connect with patrons. Some, like Sutter Street, have found a way to perform outside — California Stage recently built a stage in an open-air courtyard with small group distanced seating for this purpose.

But many more companies are offering either live or recorded performances online. Davis Musical Theatre Company just announced three upcoming musicals to be performed on Zoom — “Young Frankenstein,” “Godspell, Jr”  and “The Sound of Music.”

Leslie Addiego, board president for the Sacramento Area Regional Theatre Alliance, said some companies are finding ways to make money from these experiments, including charging tickets for virtual shows.

“In the beginning everything was free,” she said. “Now I’m seeing that change. They have to [charge], they have to survive.”

Sutter Street Theatre recently received a grant from the National Endowment for the Arts to supplement some of the revenue they’re losing during the pandemic. Managing Director Mike Jimena says there are limits to how long community theatres can go without regular ticket sales.

“You tell me we’re gonna be dark for two years? No,” he said. “But if we can get up by the first of the year, a little after, I think we’ll be OK.”

National touring productions did not visit Sacramento for the annual Music Circus series this summer. Broadway Sacramento coordinates those shows, and the productions that usually play at the Sacramento Convention Center during other parts of the year.

Broadway Sacramento president Richard Lewis said they won’t stage a show until the state says indoor theatres can reopen as they were.

And there’s the financial factor.

“We need every single seat available to sell,” Lewis said.

B Street Theatre, located in a large, newly built performance space in Sacramento’s midtown, is in talks with the city about hosting socially distanced indoor events or selling one third of their seats for shows.

“There’s 25 scenarios of what could happen and no one really knows,” said B Street Executive Producer Jerry Montoya. “If we can partner with other people and if the city and the county are subsidizing us and seeing arts as essential, as part of this recovery, then yes I think we can do it.”

For now, they’ve launched a slew of free virtual offerings including a new social justice series focusing on Black artists and other people of color, plus concerts, comedy shows and kids’ classes.

Montoya says it’s taken the actors some time to adjust to performing live on Zoom.

“It’s counterintuitive to wait for someone to stop talking and then take a pause and then go,” he said. “It took them two or three weeks to gain that new skillset.”

Actors across the region — be they in community or professional theatre — are wondering when they might get back under the stage lights.

Zane Begley, a 15-year-old playing Captain Hook in Sutter Street Theatre’s “Peter Pan,” said after a few weeks of quarantine, he became distressed over the prospect of a life without performing.

“I kind of just thought to myself, what if this doesnt end for like another two years and I just forget about theatre?” he said.

He said the opportunity to get in front of an audience this summer has uplifted the whole cast.

“We’re building something and it’s really amazing what we’re doing out here,” he said. “At least for me, because without this I’d probably be at home right now playing video games.”

California officials say events with live audiences, such as concerts and theatrical performances, will be among the last to return. These events are permitted in stage four of the state’s reopening plan, but most counties are still in stage two due to recent surges in cases. 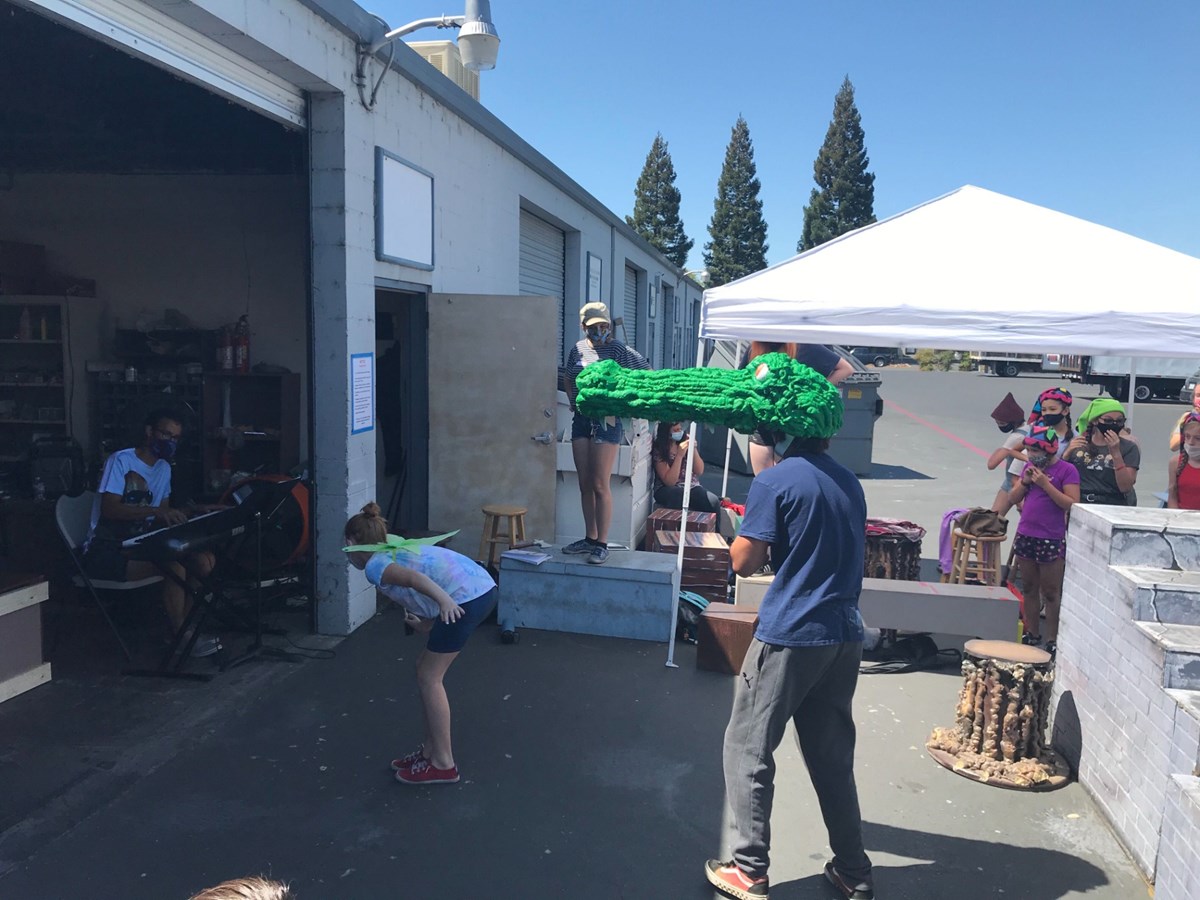 Sutter Street Theatre’s “Peter Pan” production is taking place on a makeshift stage outdoors in a restaurant courtyard to attempt to provide for safety during the COVID-19 pandemic.Sammy Caiola / CapRadio
Follow us for more stories like this