School closures announced Friday due to the coronavirus mean hundreds of thousands of students will be out of school next week across the Sacramento region. 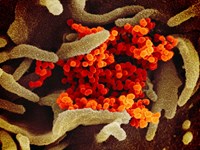 What worries you about coronavirus? How has it impacted your life? Tell us here.

The 13 school districts in Sacramento County announced Friday afternoon that they will close campuses and facilities to students for up to three weeks to combat transmission of coronavirus.

“We’re doing this based on sound medical advice,” says Dave Gordon, Sacramento County’s Superintendent of Schools “We’ll work together with the districts to get through this as best we can.”

Just how long each school will be up to each school district, Gordon says. There are about 400 schools in Sacramento County which serve almost 245,000 students, according to Gordon.

“This decision was not made lightly as all districts recognize this may cause a hardship for some families. As districts have done in the past, they will make provisions for meals for students. Each district will continue to communicate directly with families and staff with updates,” SCOE’s statement read.

Schools across the region announce closures

Along with the Sacramento County closures, several more districts across the region said they would shutter their schools starting Monday.

The San Juan Unified School District, which serves some 40,000 students at more than five dozen facilities, announced on Facebook that it is closing its campuses beginning Monday and through the end of spring break, on April 12.

“In coordination with health officials and other local school districts, we have made the decision to close San Juan Unified campuses to students” a statement from the district read.

Those include all Placer County public schools, which will also close for three weeks. In Yolo County, all Davis Unified schools will close through April 12 in “an effort to proactively slow the spread of COVID-19,” according to a district spokesperson.

Additionally, all schools of the Diocese of Sacramento will close for a minimum of two weeks, according to a letter from the superintendent of the diocese.

Late Friday afternoon, the San Joaquin County Superintendent of schools recommended all schools in that county close for three weeks starting on Monday.

All El Dorado County public schools will be closed March 16-20. Officials said they would reassess at the end of next week whether an extension is necessary.

The Elk Grove Unified Schools District closed this week after members of a family in the district tested positive for COVID-19 last week.

Friday Gov. Gavin Newsom issued an executive order that would continue to provide state funding for schools that decided to close, but did not require it.

"Closing schools has a massive, cascading effect for our kids and their families — especially those least equipped financially to deal with them," Newsom wrote in a statement. "The needs of California kids must be met regardless of whether their school is open or closed."

The executive order directs schools to use the funds to provide "distance learning and high quality educational opportunities, provide school meals and, as practicable, arrange for the supervision for students during school hours."

On Thursday Newsom said he was not recommending schools close, despite issuing an executive order restricting non-essential gatherings of 250 or more people. The governor said schools are considered an essential activity.

"Our current guidance has been that school districts work with their county public health agencies to determine what is the best practice going forward," Thurmond told insight's Beth Ruyak Friday.

Also on Friday, the California Teachers Association, the state’s largest teachers union, recommended closing all public schools and community colleges to stem the spread of the virus.

“The health and safety of our students, educators and all their families are our top priority as we grapple with this rapidly changing situation and the spread of COVID-19,” the CTA said in a news release.

The Sacramento-region districts join many of the state’s largest — including Los Angeles, San Francisco and San Diego unified school districts — which have also announced closures.