It's Election Day In California. Here's How To Cast Your Vote—Even If You Still Need To Register.

It's election day in California. Today millions of voters around the state will cast their ballots in the state's presidential primary, but also scores of local races and initiatives.

But before you can do that, you need to get registered and figure out how to turn in your ballot. California has changed a lot of the rules around voting, including allowing same-day registration, so even if this is the first you've heard of the election you can likely cast a vote today.

If you need a refresher on what's on the ballot, enter your address below and get a customized voter guide with candidate and initiative information:

Here's what else you need to know to navigate California's voting process:

How To Check If You’re Registered To Vote

The portal requires some basic information, including your name, date of birth and the last four digits of your social security number. It also asks for your driver’s license or identification card number, so make sure to have that handy.

How To Register On Election Day

Whether you forgot to register, procrastinated or just found out your registration lapsed, California has you covered. 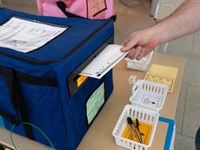 You must be in line at the polling place or voting center by 8 p.m. in order to register and cast your ballot. The registration process can take some time, so arrive early if possible.

For voters looking to update their party preference or change the address on their registration, they can now fill out a brief form instead of filling out a new registration affidavit from scratch. The state recently passed a law intended to streamline the in-person registration process.

Finally, don’t be confused or alarmed if you receive a “conditional voter registration” and cast a “provisional ballot.” These are used when someone registers and casts a ballot on election day. The vote will be counted once the county completes the voter registration verification process. More than 90% of provisional ballots were counted in the November 2018 election, according to the Secretary of State's office.

How Do The Rules For No Party Preference Voters Work?

Perhaps no topic in the primary has led to more confusion than the rules for No Party Preference voters. More than 5 million Californians are registered as NPP, making it the second largest party behind Democrats and ahead of Republicans. But these undeclared voters need to take extra steps to vote for presidential candidates. 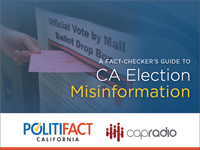 Here are the basics: If you’re registered as NPP and want to vote for a presidential candidate from the American Independent, Democratic or Libertarian party, you will need to request a crossover ballot at your voting location. You do not need to change your party registration to do this.

But if you want to vote for President Trump or any other Republican presidential candidate, or for a candidate from the Green party or Peace and Freedom party, you will need to re-register at your polling place or vote center because those political parties require it.

This is the first year California voters can change their registration at any polling location statewide on election day.

The NPP participation rules have led to misleading claims about Californians being blocked from voting for their preferred candidates, as documented in PolitiFact California’s guide to election misinformation.

No ‘Do-Over’ Voting, But There Are Replacement Ballots

With the exit of three Democratic hopefuls from the presidential race in recent days, some Californians who voted for them are wondering if they can have a ‘do-over.’

If they’ve already mailed in or dropped off their ballot, the answer is no.

But those who have filled out a mail-in ballot and not yet turned it in can make a change.

“If you have your vote-by-mail ballot and you may have already started filling it out and you bubbled a circle for a candidate who subsequently dropped out, you still have options,” said Sam Mahood, spokesperson for the California Secretary of State’s Office. “You can take that ballot with you to the polls and surrender it for a replacement ballot and vote for a candidate of your choice.”

Mahood said this option is available at all voting locations, including neighborhood precincts and vote centers.

Mahood stressed that it is illegal to vote for a second time once you have already turned in your ballot.

Why Is My Candidate’s Name Last On The Ballot?

As you scan your ballot, you might find your favorite candidate’s name is last on the primary ballot. State election officials say that’s due to a random drawing and nothing nefarious.

“The order of candidate names is determined by a random alphabet drawing that is open to the public,” the Secretary of State’s office tweeted last month. “Candidate order is then rotated by each Assembly District to prevent any candidate from having an unfair advantage.”

In January, a supporter of Vermont Sen. Bernie Sanders suggested in a video on Twitter that Sanders’ name was intentionally placed near the bottom of the candidate list. That false claim was retweeted more than 1,000 times, according to a Sacramento Bee fact check.

The reality is voters across California will see Sanders’ name sometimes near the top of the ballot, including in the Sacramento region’s 7th Assembly District. In other regions his name might be near the middle, or in Solano County — where the ballot from the concerned Sanders supporter was received — it will appear second from the bottom.