Arden Fair Mall did not open its doors on Sunday after a group of demonstrators continued a “sit-in,” protesting the Sacramento County district attorney’s decision not to prosecute the officers who killed Stephon Clark.

Berry Accius, an organizer with Voices of Youth, said Sunday morning that a group of young people began gathering at the mall on Saturday night.

“They closed the mall down because of 13 black students,” Accius said. “The main message, and I'm going to say that very clear: Those two killer officers may no longer reside or work in Sacramento ever again. They need to be fired.”

The group arrived at the mall just before 9 p.m. on Saturday, and remained inside after business hours and over night. On Sunday morning, however, they were told the mall would be closed for the day, and his group finally left to demonstrate outside when law enforcement arrived.

Scenes from Arden Mall. Barry Accius: “these are college students. Today is about stopping economic gain. We didn’t tell them to shut it down. They got scared by 8 black people. Y’all should blame the mall management.” @CapRadioNews pic.twitter.com/W0LiUAXwXn

“Sacramento, you are now warned. We might even show up at the Golden 1 arena,” he told CapRadio. “You will see more events like this shutdown.”

Khalil Ferguson, an International Relations and Economics graduate from Sacramento State, said the group left to go outside because it accomplished its mission.

“When the law arrived, we did succumb, only because we did achieve our goals,” Ferguson said.

Mall spokesperson Nathan Spradlin said that Sacramento city officials recommended Arden Fair remain closed. He added that there was “viable information regarding a concentrated effort by protesters to gather in unsafe numbers within the mall.”

“As a part of this community, Arden Fair respected the desires of these individuals to express themselves, but due to the high potential for unsafe numbers to gather today, we have closed the center to groups of any size,” Spradlin wrote in a statement.

During an impromptu press conference in front of the mall’s main entrance on Sunday morning, Ferguson announced a list of demands, including the end to the “dehumanization of black people by public officials.”

The demonstrators also want an official apology to the “unequivocal defamation of Stephon Clark.” The group is demanding that Sacramento County District Attorney Anne-Marie Schubert submit her resignation immediately and that the officers who fatally shot Clark, Jared Robinet and Terrence Mercadal, be fired.

“The goal of today was economic disturbance,” Ferguson explained. “We wanted to inconvenience businesses individually and we got the whole mall shut down.”

Sacramento State student Christine Hunter, with the Coalition of Black Students, helped organize the protest and says she wants the world to know that black people are caring and loving.

“We want [law enforcement] to know that we don’t need to do what they’re doing to us to get justice,” Hunter said. 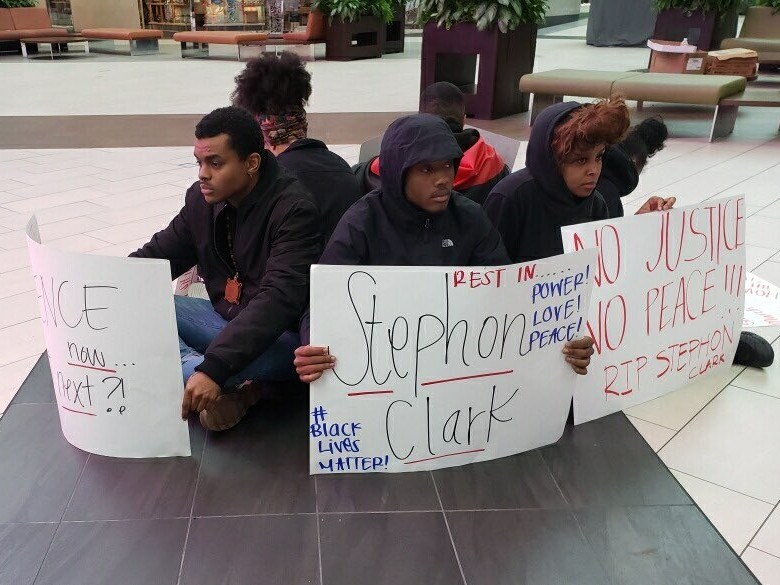 Saad Sweilem, a civil rights attorney with CAIR Sacramento Valley, sat with the students throughout the night and gave them legal advice. He says it wasn’t until the morning when they were trespassing and asked to leave.

“There wasn’t any situation that forced me to intervene. I don’t believe they did anything illegal,” Sweilem said.

Hundreds of customers weren’t able to shop at the mall, which has more than 160 stores. Sacramento area interior designer Jimmika Johnson was one of them; she was going to buy some clothes and sunglasses, she said.

“I just have to remember that the way that you send your message is through your money. Sometimes it takes withholding your money to get your point across. I’m going to find some black owned businesses to waste my money on,” Johnson said.

The DA announced on Saturday that the two officers who fatally shot Clark will not face criminal charges. Her office’s decision comes nearly a year after Sacramento police fatally shot Clark, a 22-year-old unarmed black man who died in his grandmother's backyard.

“If a black life matters to you put your fist in the air,” Barry Accius. @CapRadioNews pic.twitter.com/ySGBx8hfnz

Clark's death prompted weeks of demonstrations, with protesters spilling into the streets of downtown Sacramento. They stopped traffic on Interstate 5 and blocked thousands of fans from entering a Sacramento Kings game.

“Until we shut down Golden 1 [last March], people didn’t really care,” Accius said. “Once you start messing with the fabric of economics to individuals that don’t necessarily have to care . . . [then] you start triggering different emotions. Now [they] want to be at the table to figure out what can I do to be swifter with change.”

On Saturday after the decision, demonstrators also converged on a south Sacramento police station, where they chanted and gave speeches.

When asked if there had been any arrests related to the Stephon Clark demonstrations, a spokesperson with the Sacramento Police Department wrote in response “not that we have been made aware of.”