After Sacramento police fatally shot Stephon Clark last March, massive crowds of demonstrators overtook Sacramento’s streets. But nearly a year later, the mood this past Saturday — after the district attorney cleared the two officers of criminal charges — was different.

Just hours after DA Anne-Marie Schubert announced that she would not prosecute officers Jared Robinet and Terrence Mercadal for killing Clark, demonstrators with Black Lives Matter chanted outside a police station on Freeport Boulevard. The mood was often somber, however, and demonstrator Onethia Riley says that's because it felt like the DA was blaming Clark for his own murder.

"The character assassination of Stephon Clark, it's traumatizing. I am traumatized,” Riley said.

She’s referring to moments near the conclusion of Schubert’s press conference when the DA presented findings that indicate Clark may have been suicidal in the days leading up to his death.

Specifically, the DA revealed that Clark — who Schubert says was facing arrest after a domestic violence incident on March 16 — texted the mother of his children, Salena Manni, about killing himself.

“He was distraught and had searched suicide websites,” Schubert said. “You can see that there were many things weighing heavily on his mind.”

At Saturday’s press conference, Schubert said a jury would have been privy to information found on Clark’s phone. She also said her office did its best to exercise discretion, and that she wanted to reveal everything that went into her decision not to charge the two officers.

Former Sacramento Police Chief Rick Braziel said that while he had never heard that argument in similar announcements in the past, Schubert was correct that those details would come out in a trial.

These revelations of personal information from Clark's phone, which was unlocked by law enforcement as part of the investigation into the shooting, sparked frustration and outrage.

“I’m not surprised at the fact that she let these officers off,” said Stevante Clark, who spoke at his first public press conference since the DA’s announcement on Sunday. “I’m just surprised at the way she did it. It was just uncalled for. Unnecessary.”

He added: “Stephon, it was like he was killed again. Literally, like just ran his name through the dirt. It hurts.”

Demonstrations continued on Sunday, as a group called Coalition of Black Students continued a “sit-in” inside Arden Fair Mall. They’d arrived the night before, and remained at the city’s largest shopping center until the morning, when — after threats of arrest — the students opted to leave and protest at the mall’s entrance. 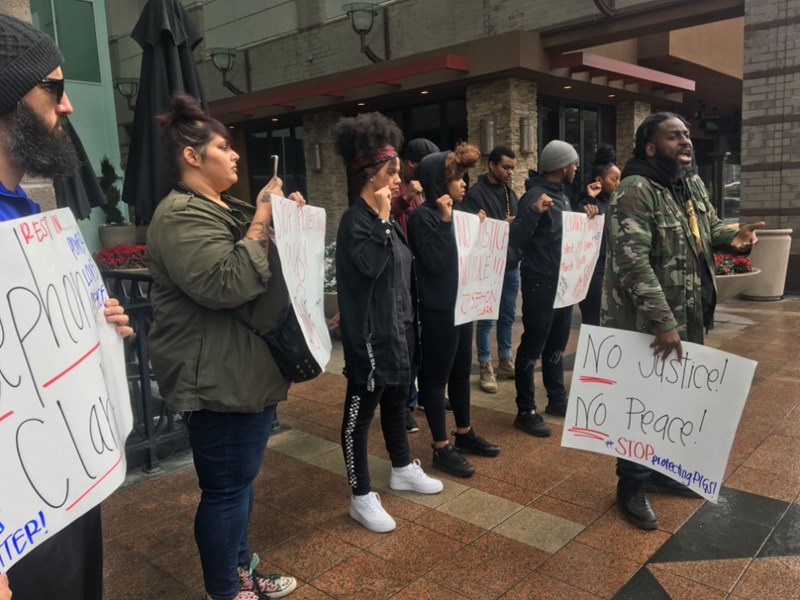 Youth are gathering outside Arden Fair to peacefully protest the Sacramento County district attorney’s decision not to prosecute the officers who killed Stephon Clark.Ezra Romero / CapRadio

Arden Fair’s owners announced early Sunday morning that the mall would not open, a decision that the coalition called a victory.

The group’s leader, community organizer Berry Accius, said a goal will be to disrupt economic centers that he says profit from black culture. The coalition is planning other targeted, peaceful protests — including possibly at a Kings game.

“Sacramento, you are now warned. We might even show up at the Golden 1 arena. You will see more events like this shutdown,” Accius said.

Across town at the Genesis Church in south Sacramento — which is immediately next to the home where Clark was killed — Pastor Tecoy Porter said he would tell his congregation that Clark’s death was “murder, flat-out.”

But he also said that people should not focus too much on the DA’s revelations about Clark’s character or “trying to defend that or not.”

“Just talk about the legacy he left. Not all good, not all bad. He lived his life,” Porter said. 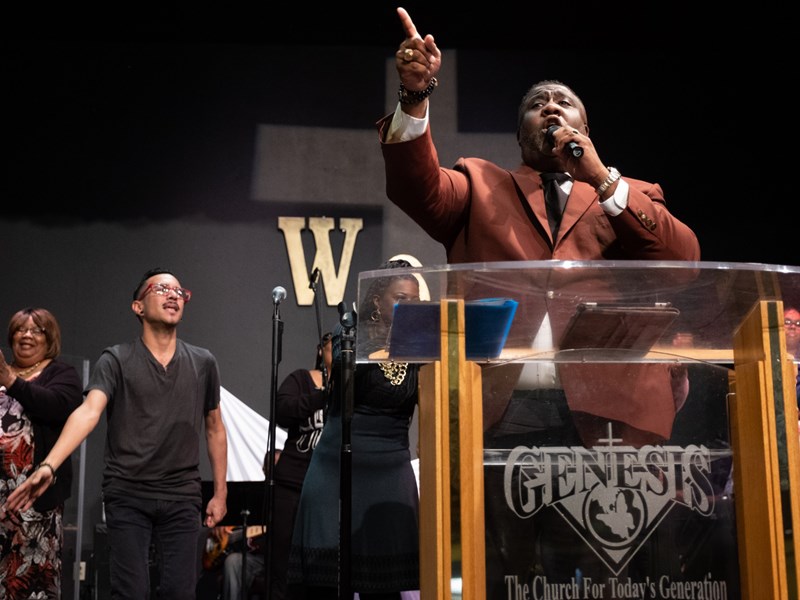 Later on Sunday, Stevante Clark took the podium at Porter’s church during a National Action Network press conference. He spoke calmly and with intent, a stark contrast to his very public grieving in the weeks following his brother’s death nearly a year ago this month.

He said the DA’s divulging of information about Stephon Clark’s text messages with Manni, and other personal information discovered on his phone, was “irrelevant” to her decision whether to prosecute Robinet or Mercadal.

“It was a way to vilify my brother,” Stevante Clark said. “No matter what he did on the 16th and the 17th doesn’t determine what happened on the 18th.”

He said the Clark family did not get a heads up that the DA would be publicizing the details.

“We had no warning, either. I was shocked. I’m baffled by her decision to do that, it’s something like I’ve never seen before. I’m hurt. I’m really hurt,” Clark said.

Others have also criticized Schubert for making public information about Clark’s threats of suicide, and for including personal text messages between he and Manni in the DA’s 61-page review of the shooting.

Tanya Faison, who founded the Sacramento Black Lives Matter chapter, argued that what happened two days before Clark died does not have any bearing on whether the officers should be held accountable.

“The fact they mentioned [Clark] and the mother of his children had a fight, and they showed the text messages between them, the fact that they exposed that he had talked about committing suicide and implied it was suicide-by-cop — I mean, there was a whole bunch of things that were disrespectful,” Faison said.

Pastor Les Simmons said the community is “really hurting” after the DA’s statements.

“I'm first just heartbroken, as a black man, as a Sacramentan that has heard her demonize Stephon Clark and then not hold these officers accountable,” Simmons said.