No dogs allowed: This prohibition against pets in homeless shelters has been a common reason that those on the streets say they stay outside even when help is available.

But there appears to be a change of heart on behalf of shelter operators to make it easier for homeless people to get themselves and their pets off of the streets.

Tina Nash and her dog, Aries, live on the sidewalk in front of Sacramento City Hall. Nash says she moved from Oregon to get out of a relationship. She and Aries have been unable to find shelter.

She says she loves her dog, but her dog is part of the reason she's still living homeless, despite help from a social worker. “I have a navigator and he does what he can to help me,” she said of her social worker. “But I just got done with her having 10 puppies. So, I was taking care of them and no shelter’s gonna have 11 dogs, not for one person."

She says she hoped to join a program like Job Corps to help her get moving in the right direction. Sacramento Job Corps does accept applicants with pets — if the pet is a service animal.

Historically, it's been difficult for people with anything but a bare minimum of possessions to access shelters or temporary housing, according to Christie Holderegger with Volunteers of America.

"These individuals have not been able to get into other shelters traditionally because they have pets, they have untreated mental illness, they have active addictions and they have significant others … and they have a lot of stuff," Holderegger said.

Volunteers of America runs the new Sacramento Winter Triage Shelter on Railroad Avenue north of the American River. It is a different kind of shelter that’s classified as “low-barrier.” People can keep their belongings in a locked area. Those with drug problems are welcome and are provided every opportunity to work toward sobriety. And pets are absolutely allowed. 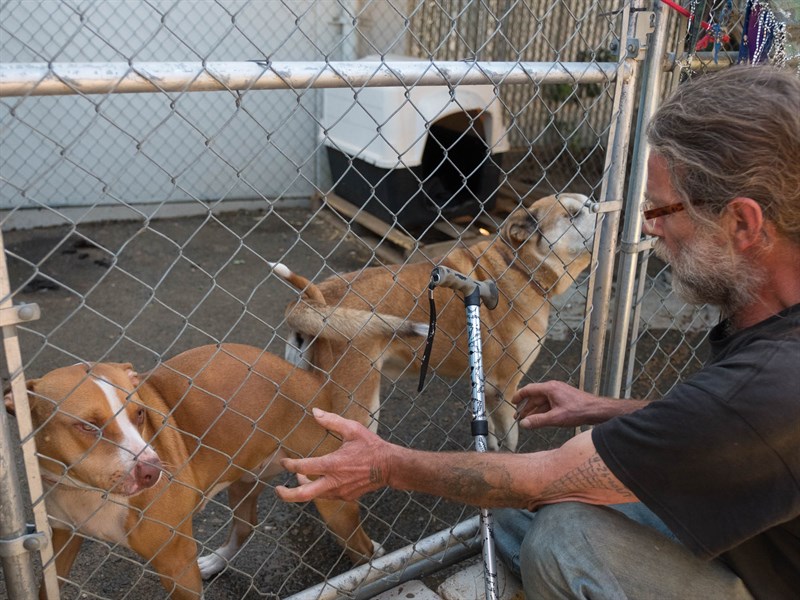 Terry Tunstall checks on his dogs in the outdoor kennel at the triage shelter in near Del Paso Boulevard. Andrew Nixon / Capital Public Radio

During a recent visit, there were 70 dogs and eight cats. The Front Street Animal Shelter microchips the pets and donates crates, leashes and food.

So far, one-third of the people who have enrolled have found temporary or permanent housing.

Lawrence Kaslar is one of them. He is awaiting paperwork to allow him to move into low-income housing and says most of the problems he’s witnessed at the shelter have been between people, not animals.

"There's been a lot of testosterone displayed,” Kaslar said, “people yelling, screaming, testing. Every once in a while, a dogfight fight breaks out. But you learn to walk away from a lot of negative situations and you try to look at the overall picture, 'Is this really worth it, you know?'"

Kaslar has a chihuahua/Jack Russell Terrier mix. He says Lucky — and the shelter's animal-friendly policy — helped convince him to give it a try.

“You have to swallow your pride and examine things and I have to think of him, too, Lucky,” he said. “Maybe I can survive the cold at 3 o’clock in the morning being out on the streets. But Lucky can’t.”

Kaslar says he has obtained service-dog designation for Lucky, who stays with him in his small, doorless room at the facility. 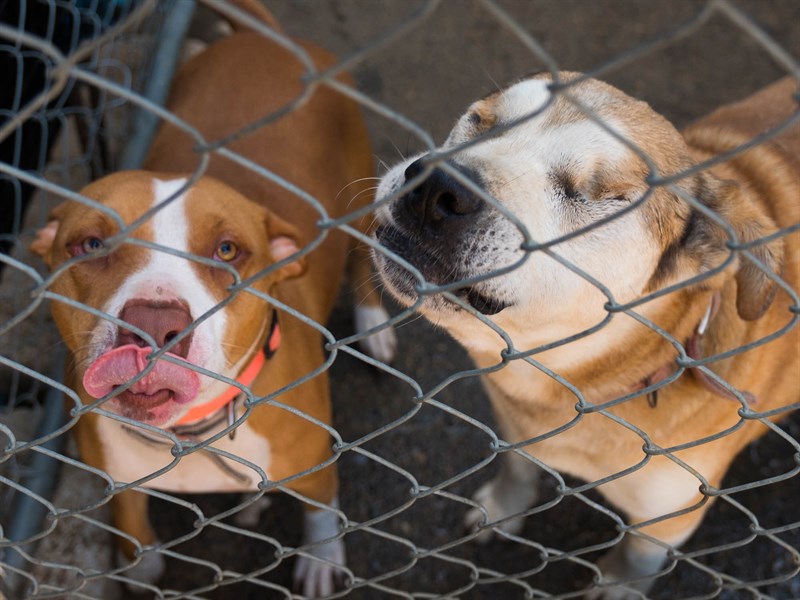 Dogs can stay inside the triage shelter or outside in a shaded kennel. Andrew Nixon / Capital Public Radio

Holderegger says rules that deny shelter for animals have led to misconceptions about their owners.

"A lot of people I think believed that they did not want shelter, and that’s not true,” she said. “They wanted to come in with their family, and a lot of times that family was their pets. It’s the only thing that loved them unconditionally.”

Holderegger says the irony is that man’s best friend is often only thing that provide people a sense of purpose and place.

“It’s been amazing and these animals are also their comfort. It relaxes them. They’re responsible for their pets. They’re feeding them, they’re walking them, they’re cleaning up after them. It’s like their children,” she said.

Other Volunteers of America shelters do not allow pets. But other shelters are starting to change.

The Salvation Army accepts animals, but kennels them separately from guests. In Sacramento County, the Next Move Family Shelter says it has begun allowing pets. It and a growing number of facilities now consider it a "best practice."

However, word has been slow to spread among homeless people, according to Next Move Executive Director Rachel Wickland.

"We've had one pet so far this entire year," she said.

The hope is word of the change in policy will soon reach people like Tina Nash and Aries.

CapRadio is joining nearly 100 news organizations across the country to focus on stories about our homeless community as part of the U.S. Homeless Project.