B Street Air Guitar Comedy ‘Airness’ Is Breezy Fun, But A Bit Thin

Back in the 1990s, Sacramento’s B Street Theatre did a rather awesome job of branding itself as a place to see hip comedies and edgy dramas.

But 20-some years have come and gone, and lately artistic director Buck Busfield has been taking the stage on opening night to jokingly assure audiences that the play they are about to see won’t make any demands on their intellect. He did it again last weekend, when the comedy “Airness” opened.

“You don’t need to think so much tonight,” Busfield told the crowd. “So you can rest your brain.”

Well, honesty is to be admired. While Busfield was having fun being playfully humorous with the B Street’s loyal subscribers, he was also telling the truth. More and more, the B Street Theatre favors comedies that are almost ridiculously easy to follow, and “Airness” is Exhibit A.

The play follows a crew of odd-but-adorable social misfits — a venerable plot device — who adopt extravagant personas and compete in cheesy air guitar competitions held in seedy bars, pretending to thrash a non-existent guitar while lip-synching to rock standards from long ago.

I heard many of these songs at college beer parties in the 1970s. Let’s be clear: this play is set in the present, but the music resembles an automated classic rock station targeting a demographic of Boomers born in the 1950s that includes me and much of the B Street audience.

The music gives the show’s young-and-limber cast many opportunities to strut and pose as costumed personas, as they appear to “play” their invisible “instruments.” It’s campy, and the audience by-and-large loves it. 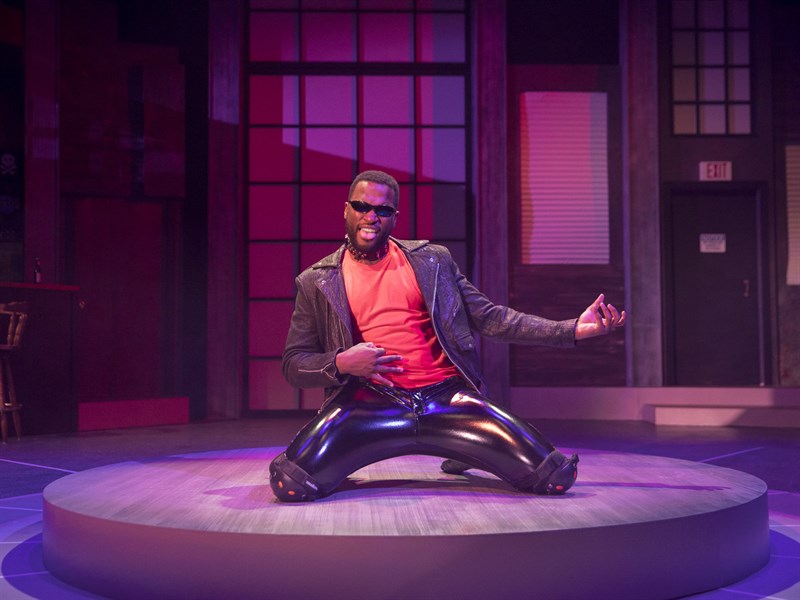 The show tries to have things both ways, because the characters onstage dismiss several featured songs as overdone, trite choices for an aspiring air guitar performer. But old standards keep on coming, regardless.

I apparently lack the requisite sense of fun, because after the third or fourth air guitar extravaganza I began to wonder about the strangeness of these young actors — several of whom probably still get carded — wigging out to loud party music from 40 years ago. Meanwhile most of the folks in the audience, including myself, are — shall we say — AARP eligible and showing more than a touch of grey.

In between musical numbers the show also has character-building scenes, as the air guitar contestants discuss their off-stage lives and dreams.

“What are you always telling me.”

“To take the threat of alcohol poisoning more seriously.”

“Yes, but, no, no no… What do you tell me when I start to doubt my own bad ass-itude? Huh, buddy? What’s the greatest thing about air guitar?”

“What does air guitar teach? Everything we need to rock is already inside us.”

“The greatest truth of this, our chosen art form.”

Cute. And if it sounds familiar, that’s because it’s basically a rehash of “The Wizard of Oz,” along the line of “There’s no place like home.”

Need I add that this show contains a love triangle, and concludes with a feel-good ending, with a bit of heart? “Airness” is a likeable play intended for easy, breezy enjoyment, but the show is about as deep as a dinner plate, and it relies on so many borrowed pop culture components and clichés that it ultimately has difficulty standing squarely on its own two feet.

The B Street Theatre production of “Airness” continues through June 10 at The Sofia in Sacramento.

Correction: A previous version of this story misstated the date and location of "Airness."