On Friday night, demonstrators in Sacramento chanted in front of City Hall, spilled into downtown’s streets, rallied in front of bars and restaurants, marched past the Kings arena, faced-off with California Highway Patrol officers at a freeway onramp, protested on the cobblestone roads of old town, and after hours of activism finally called it a night.

A few hundred activists marched for miles and until well past midnight while making demands for justice in the Stephon Clark police shooting.

Chanting has started outside City Hall. Along with chanting #StephonClark, demonstrators are also chanting the names of other victims of police shootings. #BlackLivesMatter pic.twitter.com/Ea1bgBrkIG

Their demonstration comes after the Clark family made public on Friday morning an independent autopsy. It showed that the 22-year-old unarmed black man was shot eight times by Sacramento police, with most of those bullets hitting him in the back.

Clark was killed by two police officers on March 18. Law enforcement was responding to a call about vandalism in the area. Police followed Clark into a backyard — they did not realize it was at his grandparents’ home — and shot at him 20 times. Officers thought he had a gun, but only found a cell phone on him. 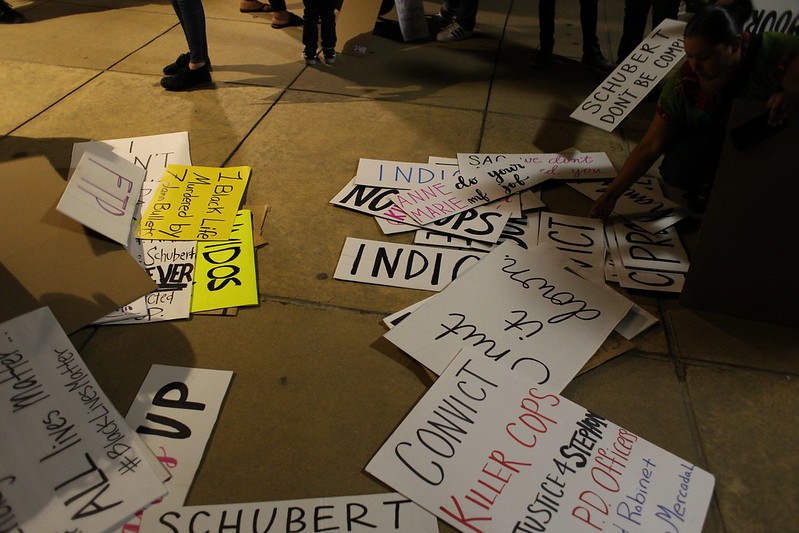 Slideshow of demonstrators on the fourth day of protests over the shooting of Stephon Clark. Andrew Nixon / Capital Public Radio

Outside City Hall just after 8 p.m. on Friday, activist Jamier Sale watched as a large and diverse crowd gathered in the plaza. He said he wasn’t surprised by the findings in the family’s autopsy. “At the end of the day, they murdered this man, and they need to take responsibility for it,” Sale said. “These cops need to be in prison.”

Activists converged on Sacramento from from outside the region. Cat Brooks, who leads the Anti-Police Terror Project in Oakland, arrived at City Hall to work in solidarity with the local Black Lives Matter chapter.

“We’ve got to start connecting the dots between the murders that are happening to our people from city to city,” she said. “As egregious as what happened to Stephon Clark is, it’s no worse than what happens in Oakland every couple of months.

Law enforcement kept its distance as protestors overtook the streets and marched for nearly five hours. On K Street, some protesters entered a bar and chanted “Stephon Clark,” surprising diners and worrying employees. 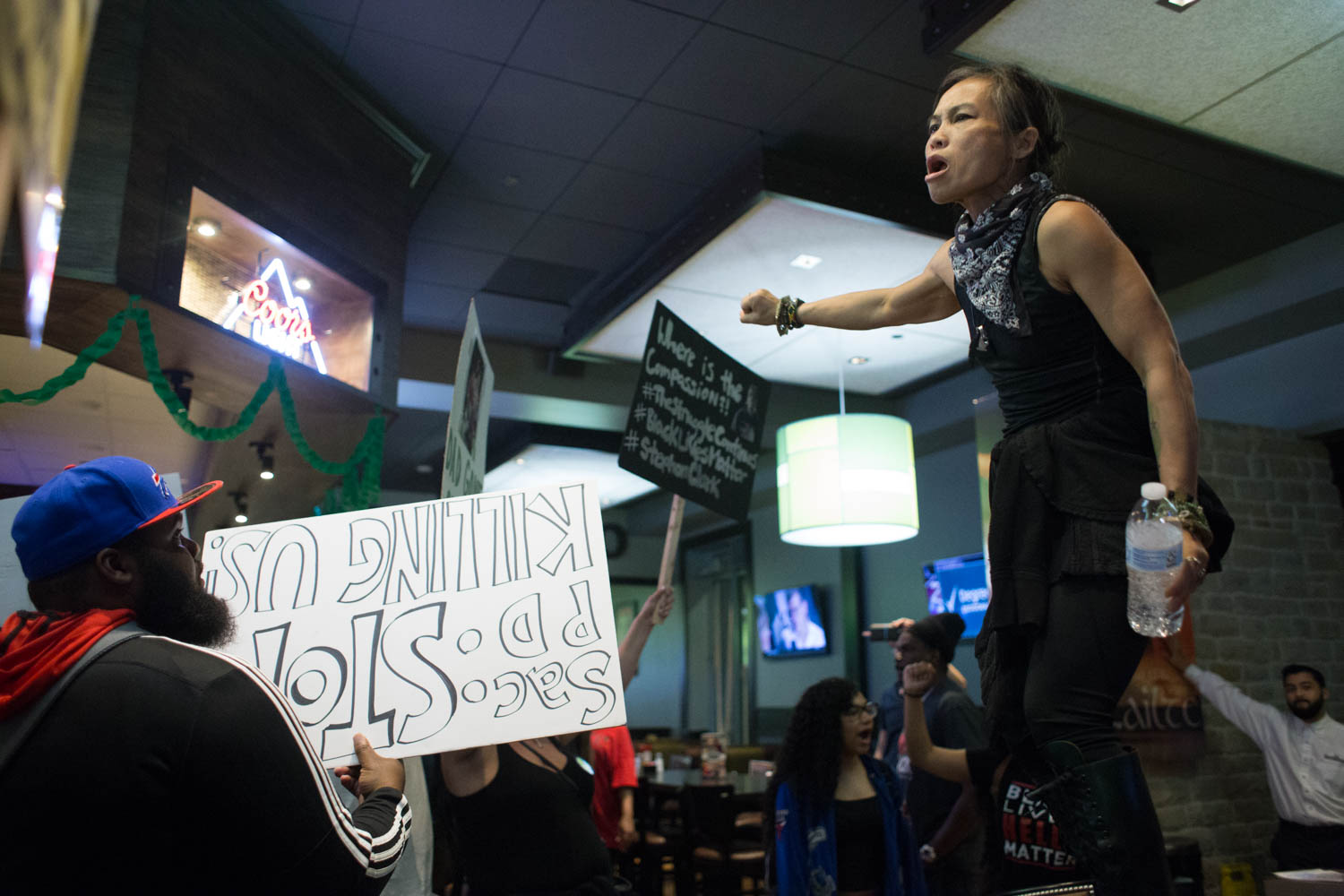 Near the Kings arena, organizers urged marchers not to deface property. And in Old Sacramento, demonstrators got into brief scuffles with late-night bar-goers, but those arguments were quickly extinguished by fellow marchers.

Standoff between demonstrators and a nightclub bouncer in Old Sacramento pic.twitter.com/KzwAxEdvzS

A couple dozen demonstrators attempted to enter the Sawyer Hotel, which is adjacent to the Kings arena, but security officers held the doors shut and locked them before protesters could pry them open.

Fight between protesters and cops as demonstrators try to enter the Sawyer Hotel near the Kings arena. Police scramble to hold door shut. Clubgoers in hotel scurry up stairs. Chanting “We shut you down.” pic.twitter.com/l3V0461fvN

Some restaurant operators locked their doors, as well, when the demonstrators marched by. During a standoff with California Highway Patrol officers on I Street, Amtrak officers locked all the doors to the nearby train station and briefly denied entrance to customers.

Demonstrators chant outside the entrance of Highway 5. Officers have blocked the entrance with police vehicles. pic.twitter.com/fKkq5yWBXC

Many of those who attended the demonstration had spent time in Sacramento’s streets earlier in the week.

Juan Banderas is a veteran from Sacramento and grew up in a neighborhood near Meadowview. “It’s upsetting, it’s really upsetting,” he said. “This is something I defended my country for, for men that look like me to be targeted.”

Jamila Ward said it was her first protest for Clark. After seeing the autopsy results, she said her feelings about the case intensified. “Yeah, it made it worse,” she said. “It would have been better if they would have just came out and said ‘We couldn’t see. We feared for our life, but we couldn’t see.’ But they were all to his back. You know, like, he was shot in his back.” 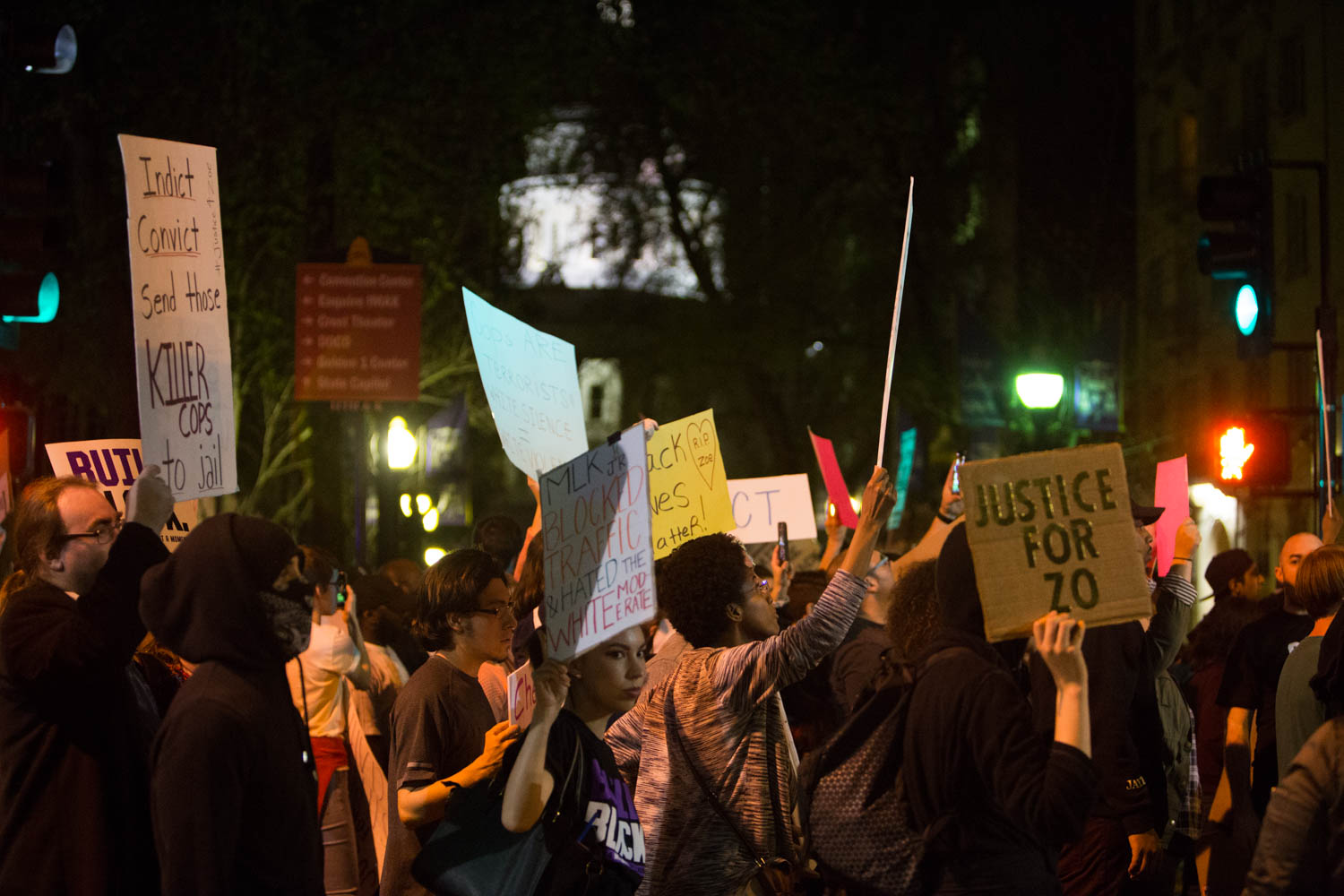 The Sacramento County Coroner’s Office has yet to release its autopsy, and the mayor and the Sacramento Police Department both declined to comment on the family’s independent medical examination.

Sacramento police said no arrests were made Friday night.

Just minutes before 1 a.m., the marchers returned to City Hall, where they gathered in silence, then finished the evening with by huddling together and chanting.

More protests are expected this weekend.