Independent Autopsy Finds Stephon Clark Shot Eight Times, Most In The Back

Stephon Clark was shot eight times, with seven bullets entering from his back, according to results of an independent autopsy announced Friday morning.

The Clark family hired Bennet Omalu — a nationally renowned physician — to perform the autopsy. He discussed his findings during a press conference.

“You could reasonably conclude that he received seven gunshot wounds from his back,” Omalu said. “He was shot in the back.”

Omalu made the case that Clark had his back to the officers when the first bullet hit him in the left side of his back.

Omalu says that Clark was hit by a total of eight shots by two Sacramento police officers on the night of March 18: five in the back and back shoulder, one in the back of his neck, one on his back side, and one in his left leg. 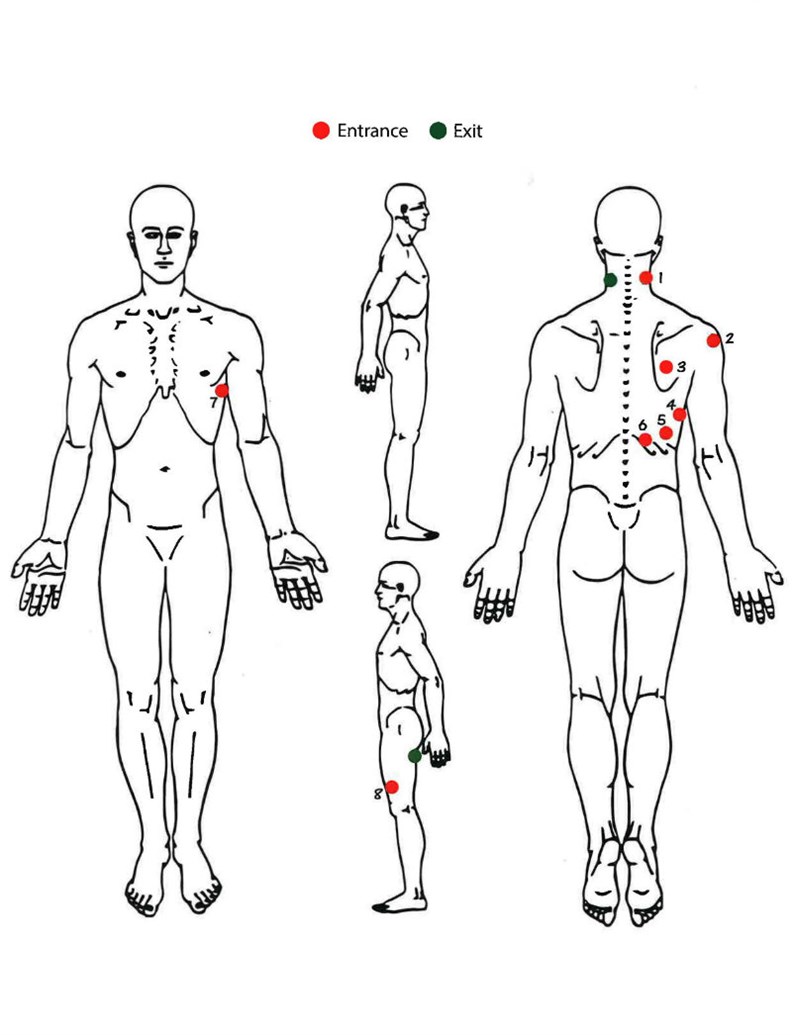 A diagram provided by Dr. Bennet Omalu of Stephon Clark's gunshot wounds shows he was hit a total of eight times: five in the back and back shoulder, one in the back of his neck, one on his back side, and one in his left leg. Courtesy / Bennet Omalu

Clark died of loss of blood anywhere from three to 10 minutes after the shooting, according to Omalu.

The Sacramento Police Department released a statement that it had not yet been provided an official report from the Sacramento County Coroner's Office, and that further comment would be "inappropriate at this time."

In a statement, Sacramento Mayor Darrell Steinberg said he knew the details of the shooting would be “graphic and disturbing,” but that the city has an obligation to wait for the results from the official autopsy and investigation.

“As the Mayor of our city, I assure the community and the public that we will aggressively seek answers to all of the questions the community is rightfully asking,” Steinberg’s statement reads.

It’s unclear when the Sacramento County Coroner’s Office will release its medical examination for Clark. A spokesperson told Capital Public Radio on Thursday that a report has yet to be written. State law requires a coroner to deliver a report within 90 days of an investigation or as soon as possible.

Clark was killed in South Sacramento after law enforcement responded to a 911 call about a man breaking vehicle windows. A sheriff deputy in a helicopter says he witnessed Clark breaking a sliding glass door, and video footage shows Clark hopping a fence into a side yard.

Officers pursued Clark into a backyard — which unbeknownst to them was Clark’s grandparents' backyard — while yelling for him to stop and show his hands. They fired at him 20 times.

In a press release on March 21, the police department wrote that, prior to the shooting, “the involved officers saw the suspect facing them, advance forward with his arms extended, and holding an object in his hands.”

Minutes after the shooting, one officer said he thought Clark had a gun in his left hand, but police only found a cell phone.

At the press conference, lawyers for the Clark family said that Omalu — who is known for discovering CTE in football players, and was portrayed by Will Smith in the film "Concussion" — has performed more than 8,000 autopsies, including 4,000 involving gunshot wounds.

“He bled massively,” Omalu said of Clark, adding that each bullet was enough to be fatal on its own. “Death was not instantaneous, so death took about three to 10 minutes. It was not an instantaneous death.”

Religious and community leaders, including Les Simmons of the South Sacramento Christian Center Church, offered a prayer and statement before the release of the autopsy.

Tanya Faison, founder of the local Black Lives Matter chapter, was at the press conference and reacted to the family’s autopsy report. "He was shot from the side in the first shot, which means, the police lied about everything,” she said. “They lied about every single thing. How many others have they lied about?"

After the meeting, the mayor pleaded for calm. “From the bottom of my heart, I urge our entire community to work together through nonviolent civil action as we pursue justice and demand reform,” Steinberg said.