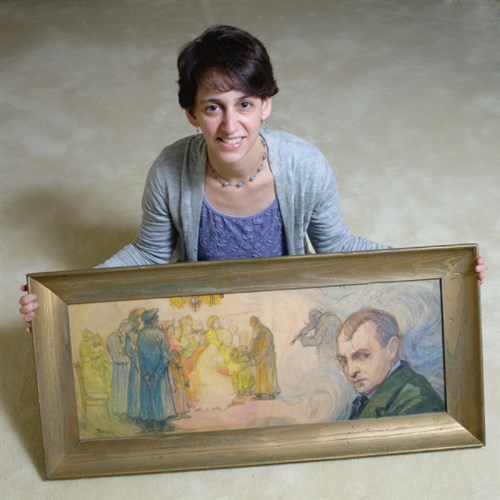 The Nazis were famous for raiding and ruining art collections throughout Europe during World War II. Some of the work was by little-known but prolific artists who documented the way of life they saw around them.

One Jewish artist in Poland saw that his home and his life were in danger. His name was Moshe, and he decided to hide his art from the Nazis. He distributed more than 800 paintings to friends around Warsaw. Moshe later died in a concentration camp.

His son moved to the U.S. and settled in California, bringing a handful of Moshe’s paintings with him. Moshe’s great-granddaughter, Elizabeth Rynecki, has spent much of her life in search of the rest of Moshe’s paintings. She has found his art in Poland, Israel, Canada and France.

I found Elizabeth Rynecki at her home in Oakland, and I greeted her with a traditional Polish question.

“Jak się masz?” (pronounced YOCK-zee-MOSH) means “how are you?” and it’s one of three phrases I know in Polish. Rynecki also knows three phrases. She heard family members speaking Polish, and she saw many of Moshe’s paintings hanging in her childhood home, but Rynecki didn’t pay much attention as a kid, and she didn’t understand that her experience was unique. Not everyone is related to a talented artist.

"The first time my great-grandfather’s artwork was actually exhibited was in the 1980s at the Judah Magnes Museum in Berkeley, and that was the first time I realized there was something special about him, in that other people wanted to know about him," she said.

As Rynecki’s interest in Moshe’s art grew, an important family document surfaced. Moshe’s son, who was Rynecki’s grandfather, had written a memoir. It told the story of the family in Warsaw in the Holocaust, and later in the U.S., and it brought home for Rynecki the importance of finding the rest of Moshe’s paintings. She considers it her personal mission – and a responsibility.

There are many stories of families trying to retrieve art that was lost in the Holocaust. Ryneki’s quest is different. Moshe left his paintings, but there is no documentation to prove ownership, so Elizabeth searches for the art as a historian, not as a claimant.

"It became clear to me over time that we didn’t have the sort of information one needs to be a successful claimant," said Rynecki. "It was still possible to rescue his legacy and to rescue the knowledge of his paintings without having personal possession. And it became more import to rescue that."

Of Moshe’s 800 or so paintings, Rynecki has seen only about 200. I asked her if she has a favorite.

"I DO. My favorite is Luna Park," she says. "It feels so happy. It feels like you can hear carnival music and people eating and people laughing and people having a delightful and happy time."

And like so many of the paintings by Rynecki’s great-grandfather, the painting shows what was important in Poland before World War II began.

Note: Donna Apidone will talk with Elizabeth Rynecki about her book, Chasing Portraits, at CapRadio Reads on Tuesday, Nov. 14. Reservations at capradio.org/reads.