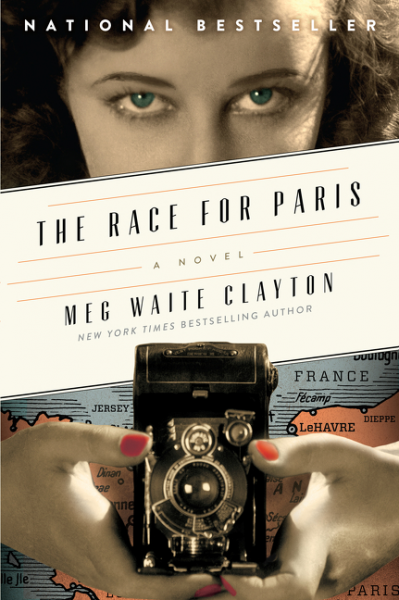 World War II was a war of heroes – a man’s war, mostly. The women in the war were nurses and secretaries; only a handful were journalists. That last category wasn’t taken very seriously. Women were not welcome in military briefings. They were prevented from filing stories with their own names as bylines. The gender gap in WWII is the subject of the latest novel from New York Times Bestselling Author Meg Waite Clayton.

The Race for Paris captures three months in the lives of women who were World War II war correspondents. They had a much different experience than men doing the same work.

“It was a very tough life,” according to Clayton. “I mean, these women bathed by putting water in their helmets, not always warm water. They were obviously at risk, especially the ones who broke the rules to cover the liberation of Paris.”

As much as she admires the courage of those women, Clayton doubts she would have wanted to be a journalist in WWII.

One of the journalists in The Race for Paris says that the war brought out “some filthy part of me I hadn’t known before.”

“That’s the flip side of war,” Clayton explained. “I think we see the bad things people do, and it often brings out the worst in us as well. The instinct to survive sometimes makes people do things they are horrified by later. In getting the story, you often have to stand by and watch something happen instead of intervening. I think it’s difficult for most journalists to get over. It’s a love story, and it’s an adventure story, but it’s very much an exploration of the difficulties of war as well.”

One of the women in Clayton’s book was a writer, and the other was a photographer. Both saw things they wish they hadn’t seen, but that was the job. It reminded Clayton of a quote from the first female war correspondent, Margaret Bourke White, who photographed in combat zones during World War II.

“She said, ‘Using the camera was almost a relief …. It interposed a slight barrier between myself and the horror in front of me.’ You put your camera or your pen and paper in between you and the experience so that you can distill it down and write about it and often save it for later to digest.”

Clayton is a history buff, who is fascinated with photojournalism. Bourke White’s photos influenced the author as she wrote The Race for Paris.

“The story was inspired, in part, by something I read in Margaret Bourke White’s autobiography. And it made me very interested in the intersection of parenting and being a war correspondent, which is really a very tough intersection, of course. And that is really where the story began.”

What makes that intersection tough?

“It’s a bit difficult to pack up a baby and take him or her off to war with you. And so, women who are war correspondents make choices. I have yet to meet a war correspondent who feels they have done a really great balance between family and career – a female war correspondent – it’s different for men. This is one of the things that is interesting to explore in the novel – the many differences that men and women face, including the different expectations for parenting. At that time, no one expected their war correspondent daddy to be home taking care of them.”

Meg Waite Clayton is inspired by people with a sense of purpose. She has a definite purpose for her blog, called “1st Books: reading, writing & publishing”

Her aim is to help encourage new writers through the rough spots.

“There are kinds of two breakthrough moments,” she said. “One, the moment you decide to try to start to writing, and the other, when you are at that point when you are going to give up, and you decide not to.”

Clayton’s blog features her own suggestions, as well as articles from other writers. They share their successes and failures – war stories, of a sort – at every step of the publishing process.

Perseverance is important to becoming a published author, but as Clayton points out, the experience of writing is profound.

“I do not mean to make it sound easy,” she said. “My first novel took ten years to get published, and my second novel was not published until five years after my first novel. So I don’t mean to make it sound easy at all, but I will tell you it is worth every minute of it. You come to see the world as a writer much more intimately than you do if you’re not writing. You stop and look at things in different ways. You think about things in different ways. It really allows you to come to know the world and yourself in a way that is incredibly rewarding, whether you publish or not.”