“The Comedy of Errors” by William Shakespeare is a farce involving identical twins – separated during a shipwreck as toddlers, who each grow up thinking the other had drowned. Years later, by accident, they both turn up in the same city, setting off a chain reaction of hilarious incidents involving mistaken identity.

Shakespeare’s setting for the play is rather indistinct – a mysterious, exotic city in some far-off land, leaving plenty of room for interpretation. Tahoe Shakespeare’s artistic director Charles Fee chose to set this outdoor lakeside production in Rio de Janeiro, during Carnival, when masked revelers in glittering outfits romp through the streets, partying all day. 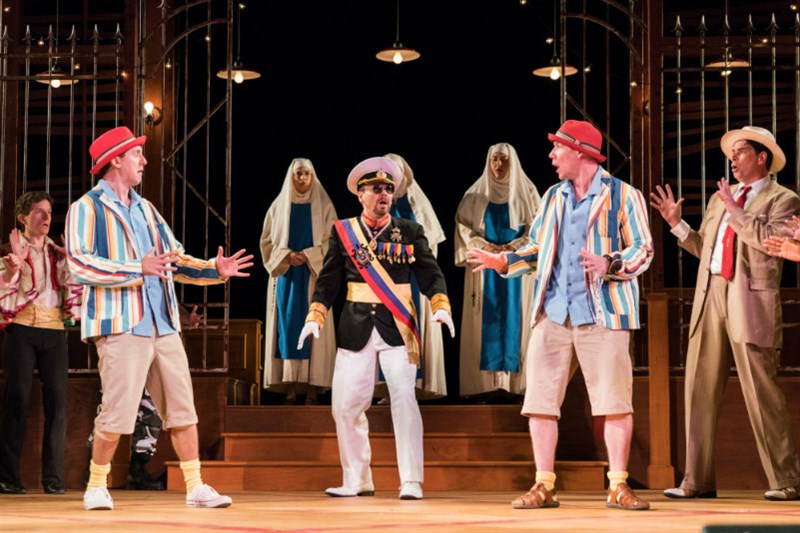 The newly-arrived identical twin wonders if the entire city is bewitched. He’s been told the town is full of “nimble jugglers that deceive the eye, dark working sorcerers that change the mind, soul-killing witches that deform the body, disguised cheaters, praying mountebanks, and many suchlike liberties of sin.” So he’s worried about the intentions of everyone he meets.

What’s more, he constantly runs into strange people he’s never met, who walk up and shake his hand. He says “There’s not a man I meet but doth salute me as if I were their well-acquainted friend, and every one doth call me by my name… Sure, these are but imaginary wiles, and Lapland sorcerers inhabit here.”

Then the scene is suddently interrupted by a thunderous samba school on parade – with shimmying women in skimpy outfits prancing ecstatically onstage. These crazy samba breaks occur repeatedly during this deliberately chaotic production.

And there are many more episodes involving mistaken identity. One of the twins finds himself embraced by an unfamiliar woman wearing a smelly, food-splattered outfit, who insists she is his wife. He says, “She’s the kitchen wench… and all GREASE… and I do not know what use to put her to but to make a lamp of her, and run from her by her own light.”

How greasy is she?

“If she lives till doomsday, she’ll burn a week longer than the whole world!”

A line that provoked uproarious laughter from the Sand Harbor audience.

This production features a large acting company with 17 professional actors, who generate comic mayhem with panache. The show also features plenty of sexy dancing, colorful costumes and energetic music. It resembles one of Sacramento’s Music Circus extravaganzas more than old-school Shakespeare in this regard. 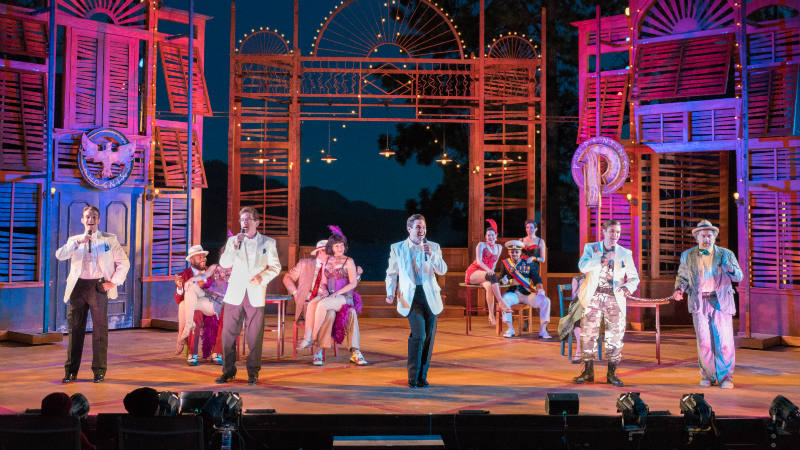 And since this is a free-wheeling farce in which anything goes, there’s even a cameo appearance by the cast of Tahoe Shakespeare’s other summer show, the 1950s jukebox musical “Forever Plaid.” After intermission, four clean-cut guys in tuxedos stroll into a party scene, harmonizing the 1940s standard “Perfidia.” It’s a cheeky bit of cross marketing by the festival, done with a knowing nod and a wink. The inserted song has nothing to do with Shakespeare’s script. But I must admit that I smiled and giggled at this audacious move.

Tahoe Shakespeare’s shows have gotten bigger and more polished in recent years, and this “Comedy of Errors” is an elaborate production like you’d find at a major summer festival – fast, flirtatious, fanciful and fun.

"The Comedy of Errors" continues at the Lake Tahoe Shakespeare Festival through August 21st.

Listen to actors Jeffrey Hawkins, Erin Partin, and Mic Matarrese talk about the play and what it's like to perform at Tahoe:

Listen to actor Mic Matarrese perform an excerpt as the Duke:

Listen to Erin Partin perform an excerpt as Adriana: 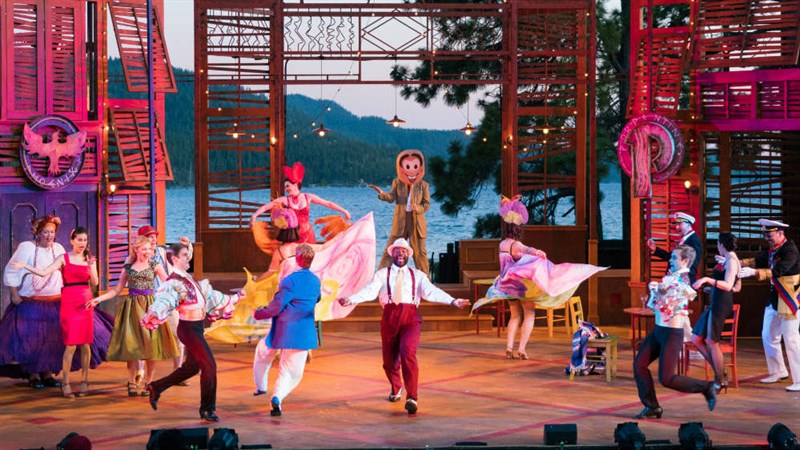