On a recent evening in Capitol Park, dozens of people, mostly in their 20s and 30s, are mingling near landmarks and points of interest looking at their phones. Every so often someone will yell, “Arcanine” or “Charmeleon” followed by a wave of responses of “I got it!,” or “Oh man, it ran away.”

They sit, stand or wander around the park, congregating in large numbers near the rose garden. They’re all there for the same purpose -- the virtual reality game called “Pokemon Go.” 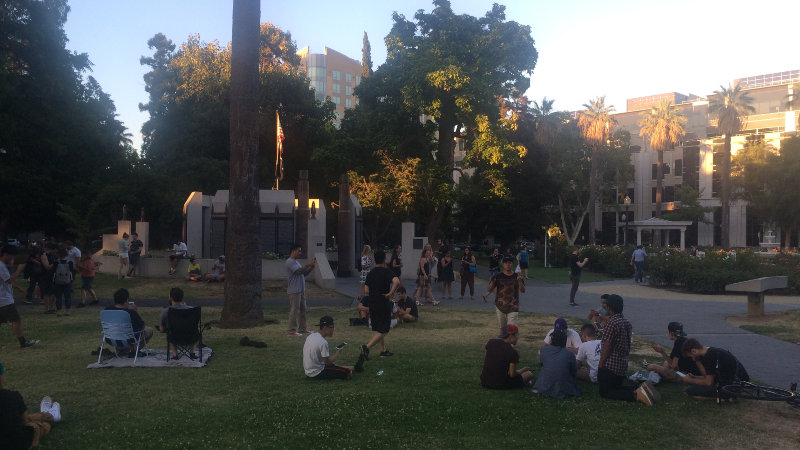 From the onlookers perspective the scene might seem strange. Even players tend to look at each other in disbelief and laugh at how the game brought them together. Joseph Gutierrez says that’s why he decided to organize a Pokemon Bar Crawl for Saturday, July 23.

“‘Pokemon Go’ brings people together in a way we as a country need right now, it's all love. I've met dozens of people playing the game on the grid and I figured it would be great to make an event to bring in more people,” says Gutierrez.

The game is played by walking around in the real world looking for pretend creatures. Players use their phones to view, capture and train these creatures to battle other players.

Some of the Pokemon gatherings happen naturally, like the one in Capitol Park. Players see each other and swap knowledge and tips. Some of the events, which attract hundreds of Pokemon hunters, are organized by businesses or players. More than 1,000 people say they would attend one planned this weekend, but organizers canceled it due to too much interest.

Even the Sacramento Kings are getting into the action with a meetup planned for Friday. The Front Street animal shelter is holding a Pokemon-themed adoption event next week. 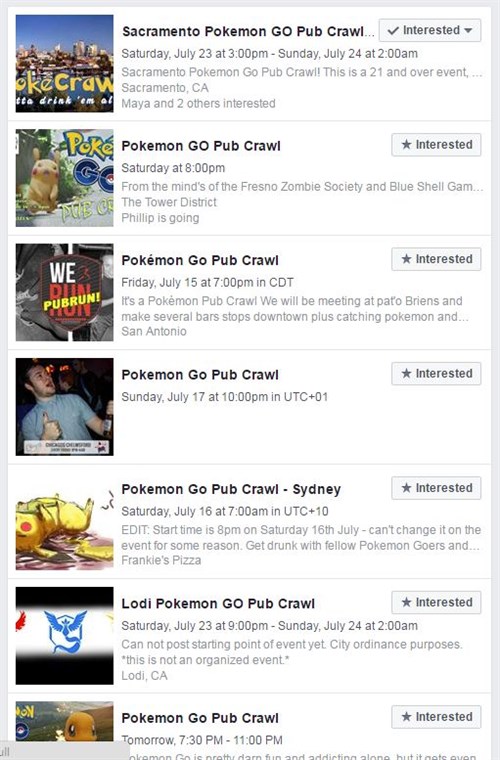 Gutierrez manages the Sac Social Club Facebook page and is organizing that group’s pub crawl  on July 23. The event already has more than 1,500 people planning to attend, and 5,700 say they’re interested in going. In order to keep the experience positive for everyone involved, Gutierrez went to Tuesday’s City Council meeting to fill in city leaders.

“We wanted to be completely transparent with the city and to let them know exactly what we’re doing,” says Gutierrez.

Councilman Steve Hansen represents the area where the pub crawl will take place and offered his assistance to the event organizers, says Gutierrez.

“We’re just making this as big as possible and as safe as possible, with the full cooperation of the City of Sacramento, so this is a great thing for the local economy. So that’s our goal, is to make Sacramento thrive,” says Gutierrez.

Gutierrez says as someone who grew up playing the original Pokemon games, “Pokemon Go” is a “dream come true.”

Along the excitement about the new game are the downsides. There have been reports of players hunting in less populated areas getting mugged. All the unintentional exercise of walking around looking for Pokemon is also causing a sore-leg epidemic. Law enforcement and parks staff are aware of the new phenomenon and ask players to stay alert and stay safe. For the most part, city officials say they like the influx of people in public spaces.

Chris Conlin is the director of the Parks and Recreation Department for the City of Sacramento:

“We can’t endorse a product, but anything that gets people into the parks, we’re pretty excited about,” says Conlin. “The parks are there for the people, so getting another way for people to enjoy the parks, that wonderful. As I understand it, that’s part of the intent of this particular game.”

Conlin said his team is aware of the meetups and pub crawls and says crowds congregating in public parks is nothing new. He says that’s allowed long as it’s not more than 50 people for more than 30 minutes and as long as it doesn’t interfere with other people in the park.

Video: As the Nisenan language disappears, an artist in Colfax works to preserve it