California’s End of Life Option Act, which gives terminally ill patients the right to ask their doctors for a medication to end their own lives, goes into effect June 9.

Patients who want to obtain a prescription for an end of life drug must complete a series of steps before their request is fulfilled.

The law states that individuals must make two oral requests for an end of life drug 15 days apart. They must also submit a written request using the form “Request For An Aid-In-Dying Drug To End My Life In A Humane And Dignified Manner.”

George Eighmey, president of Death with Dignity, a nonprofit that provides information and support about end of life options, says if California’s roll out mirrors Oregon’s law, there will be challenges finding physicians ready to participate.

Eighmey says initially, Oregon doctors were slow to participate in the law, but once they were educated about it, more began writing prescriptions.

Currently, the California Medical Association is providing an online resource with guidance for physicians and patients interested in knowing more about the End of Life Option.

Alicia Wagnon, deputy legal counsel for CMA, says the group is making information and opportunities available for physicians to become educated about the law and the legal requirements.

CMA doesn’t keep a list or designate physicians who provide end of life drugs. Under the law, physicians who decide not to participate in the law, aren’t obligated to refer patients to a doctor who is willing to write a prescription. 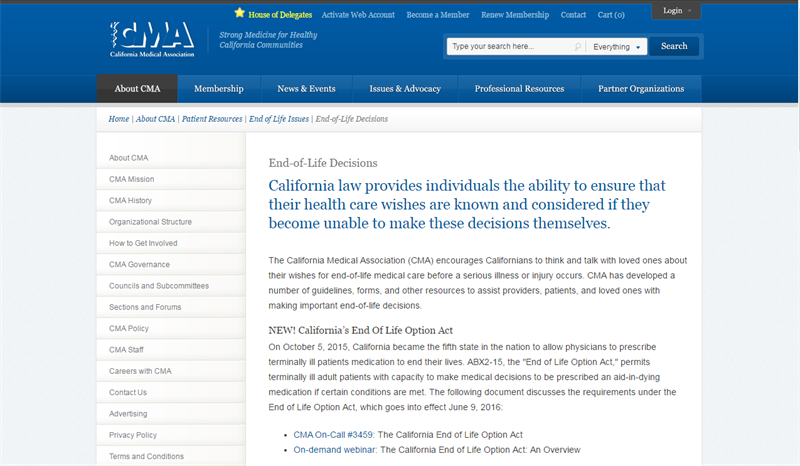 The law doesn’t specify what drug has to be prescribed but a mixture of phenobarbital, morphine sulfate, chloral hydrate and ethanol are used in other states.

Patients must be able to self-administer the medication.

Sen. Lois Wolk, co-author of the law, believes aid-in-dying should be part of the continuum of care at the end of the life.

“The benefit of this law and the benefit of the roll out over time is that conversations about the end of life choices has become much more common than it was before we ever introduced the law,” Wolk says.

The first attempt to legalize aid-in-dying in California, appeared as Proposition 161 on the state’s 1992 ballot. Two more failed attempts came in 1999 and 2005 before Sen. Wolk and Sen. Bill Monning introduced SB128 in January 2015. Several Assembly Members, including Susan Talamantes Eggman and Mark Stone would go on to amend the bill before it passed in September 2015.

A CDC Panel Backs Booster Shots For Older Adults, A Step Toward Making Them Available