Analysts say new housing data show a growing divide between people who own homes and people who don't.

First-quarter data show there's a much better chance Sacramento area homeowners have equity in their home and are not underwater compared to last year.

"It really has become a market of haves and have nots," says Daren Blomquist of RealtyTrac.

The research firm's data show one in four homeowners have at least 50 percent equity in their homes. That's up 22 percent from a year ago. And the number of homeowners who owe at least 25 percent more than what their property is worth is down 24 percent.

Blomquist says the "haves" are the folks who stuck it out through the housing crisis and now have a lot of home equity.

"But people who maybe have lost their homes during the crisis or never bought, it's going to be tougher for them to get a foothold in the housing market," says Blomquist.

He says that's because prices continue to go up making it difficult for people who don't already own a home and have equity they can build on. 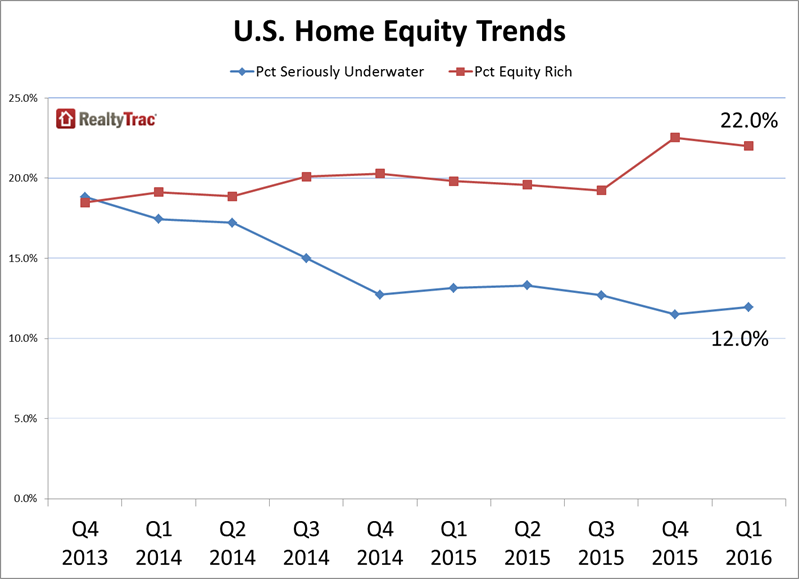 Statewide, fewer homeowners in California are seriously underwater. Blomquist says only 7.5 percent of homeowners are underwater. That's down 18 percent from a year ago.

"We're now really getting into what I would consider almost normal territory," says Blomquist. "You would consider a normal market fewer than 5 percent of homeowners underwater. And in California we have 7.5 percent."

Blomquist says many of the toxic loans that people got before the housing bubble burst have either been foreclosed on or refinanced into a better loan.

"Now there still are 611,000 homeowners statewide who are seriously underwater," says Blomquist. "But the vast majority of those have been cleared out of the system."

On the flip slide, the data also show more than 2.5 million California homeowners are equity rich, meaning they have at least 50 percent equity in their homes. That's up 16 percent from a year ago.