Theatre Review: Classic Conan Doyle With 'The Hound Of The Baskervilles'

The detective Sherlock Holmes has been fascinating readers, and later theater goers and movie fans, since the 1880s. In this century, we have television’s modernized version starring Benedict Cumberbatch. But it’s classic Conan Doyle on stage now at the Sacramento Theatre Company with their production of “The Hound of the Baskervilles.”  The show is a pleasant stroll down memory lane.

Say the name “Sherlock Holmes,” and people instantly picture an observant guy in a deerstalker cap, puffing a calabash pipe. Holmes is like a prototype superhero, who can use amazing logic to instantly size up a man he’s just met, and then explain how he did it, as actor William Elsman demonstrates.

Holmes: You were born in Canada, Sir Henry.

Holmes: Yes, province of Alberta. Nearer Edmonton than Calgary, I should think. You spent a good portion of your life on horseback. Though not a military man, you’ve grown accustomed to issuing orders and seeing them carried out. Your left leg was broken when you were young, probably falling off a horse. You’re an only child, you’re not married, and your horse is a dappled grey gelding.

Holmes: The shape of the wear on the hem of your coat, the hair on your coat, the callous on your right hand, the way you hold yourself, the shape of your legs, the scars on your fists, the lack of them on your face, your father’s watch, chain fob and ring, and something ‘a-boot’ your accent.

Elsman is well suited to the role, which he plays with a straight face and a twinkle in his eye. He also presents the highly intellectual Holmes as a man somewhat lacking in common social graces, and the audience is encouraged to smile at his occasional overstatements.

Holmes: Quick, Watson, your hat and coat. We mustn’t let him out of our sight.

Watson: Do you believe that Sir Henry is in danger here?

Holmes: I do. Terrible danger. But out of this nettle ‘danger,’ we pluck this flower ‘safety.’ Shelley?

Shakespeare jokes alternate with chase scenes in this brisk production, along with foggy nights on the moor and howling hounds. Holmes pops up in disguise several times, to the delight of the audience, and the mysterious murderer is eventually identified.

This show is all about cleverly meeting our established expectations in a good natured way, while staying within the Arthur Conan Doyle storytelling formula. It’s an entertaining, nimble production that makes no particular effort to break new ground. But if you’re looking for a comfy reunion with a great detective who’s been a pop culture fixture since Victorian times, this show at the Sacramento Theater Company will fill the bill. 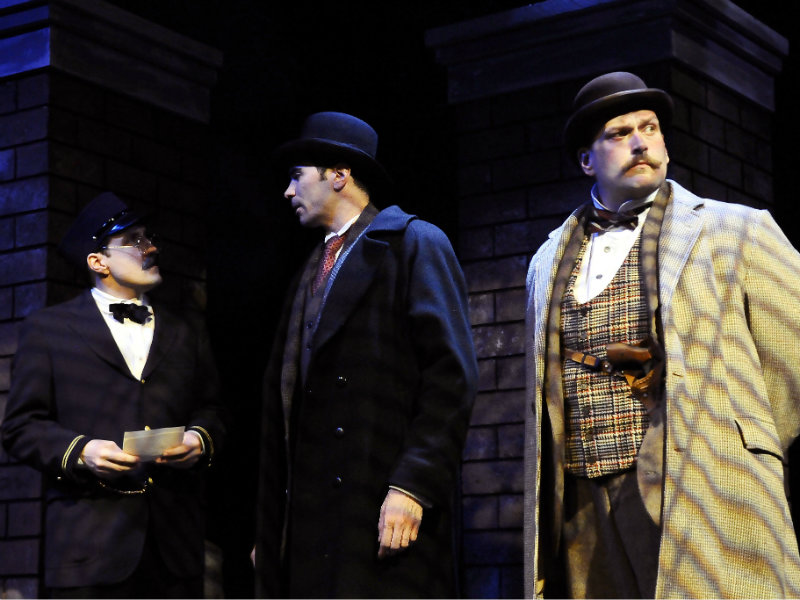 The Sacramento Theatre Company’s production of “The Hound of the Baskervilles" continues through May 15.