'Elf The Musical' A Kitschy Collage Of Christmas Clichés

The first image you see in the stage version of "Elf" is Santa Claus watching tv and munching on chips – the brand name is prominently displayed. And that tells you most of what you need to know about this musical – it’s cute, it’s a teeny bit sassy, and it sometimes feels a like an advertisement. 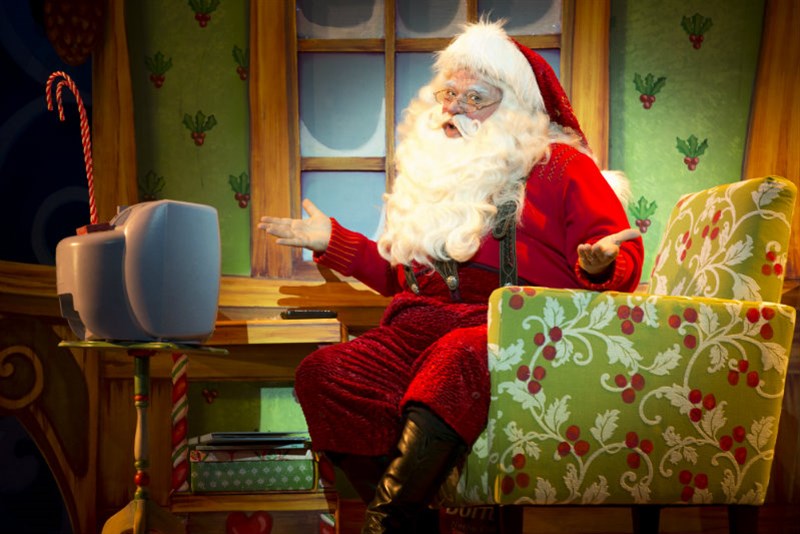 Gordon Gray (Santa) in the Broadway Sacramento presentation of “Elf The Musical” at the Sacramento Community Center Theater November 6 – 15, 2015. Photo by Joan Marcus.

“Elf” began in 2003 as a Hollywood vehicle for comedian Will Farrell, who has long since moved on to other projects. The movie didn’t collect any Oscar nominations, but it did gross $220 million. And that got the attention of Broadway, which is always on the lookout for a holiday season show that doesn’t involve a guy saying “Bah, humbug.” Instead, you get a six foot tall Elf, who meets a pretty girl, and then yodels his way through a Whitney Houston pop anthem from the 90s, to the delight of the crowd.

Along with live action versions of the film’s better-known physical comedy scenes, “Elf – The Musical” comes with about 40 minutes of added dance numbers. So the 97-minute movie is now a two-and-a-half-hour musical, which is where the parental advisory comes in. Most evening shows let out around 10:30 -- way past bedtime for younger kids. And the elf-meets-girl subplot culminates in a big kiss that five-year-olds may regard as icky.

The score has a distinctly retro/vaudeville feel, but a few of the tunes sound like they might have come from a nightspot with leggy, sequined dancers, rather than the North Pole. 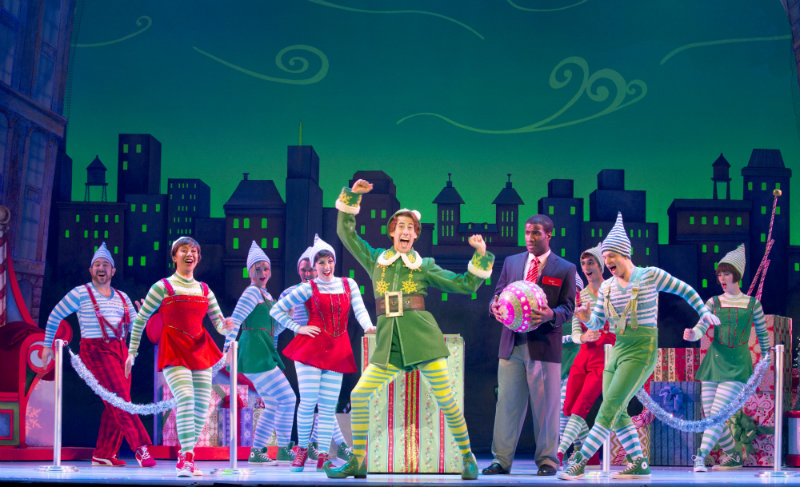 Matt Kopec (Buddy) and the cast of the Broadway Sacramento presentation of “Elf The Musical” at the Sacramento Community Center Theater November 6 – 15, 2015. Photo by Joan Marcus.

If you’re hoping to hear seasonal carols like “Silent Night,” you’ve come to the wrong place. “Elf” is a kitschy collage of commercial Christmas clichés, decked out with pop culture references, and scenes involving product placement. But it’s is an amiable show that doesn’t take itself too seriously. Still, in all likelihood you’ve probably seen it all before.