The water conservation rate dropped four percent in August - to 27 percent - compared to the amount saved in July. Regulators don’t think the decline is “drought fatigue,” but instead a very hot August.

“It was just really hot and it didn’t rain a lot," says Felicia Marcus, chair of the State Water Resources Control Board.  "I think we hit 31 percent more easily because we had a relatively wet July in Southern California which is over half the population, which skews the results.”

So far this summer, Californians have saved enough water to supply more than a million homes for a year. It's half of the conservation goal set for February of 2016. Max Gomberg, climate and conservation manager with the state water board, says overall savings will be more incremental in the cooler fall months.

“So the percentage may drop, but the reason we’re already over 50 percent of our savings goal is because so much water by volume is used during the summer months,” says Gomberg. 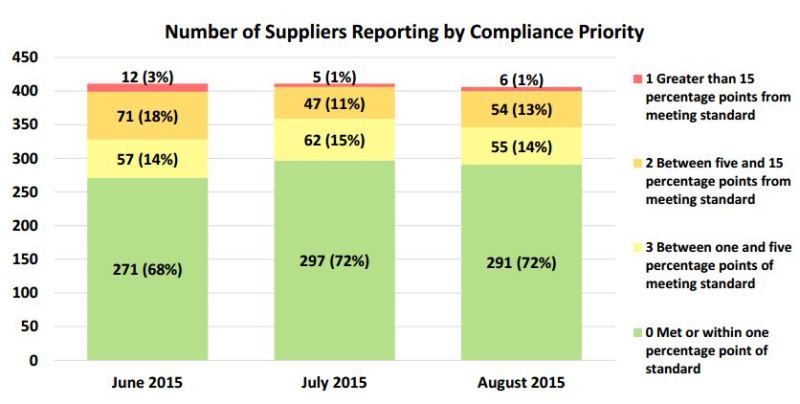 Seventy-two percent of urban water suppliers met their conservation target in August. Thirteen percent were between 5 and 15 percentage points of their goal. Only six suppliers were more than 15 percent away from their goal. Two of those are under an alternative compliance order.

But compliance is cummulative. State regulators say some water suppliers would have to conserve more than 45 percent monthly to meet their conservation target by February. If they fail, they could be subject to fines of up to $500 a day or $10,000 a day if they violate a cease and desist order.

So far the water board has not issued any fines.

Local water waste complaints and the number of penalties issued dropped slightly in August, while the number of warning increased.