“The Explorers' Club” is a fast-moving show that lovingly satirizes Hollywood classics depicting upper class life in Victorian England. The play opens in a private London club, where the members – all male – lift their drinks and sing in praise of science.

Each of these researchers has a particularly British eccentricity. Professor Walling studies guinea pigs, and he carries one constantly in a little cage.

Prof. Walling: “Lovable creates, very clever. I conducted an experiment in which I put food outside their cages, to see if they would be able to figure out the latches. And you know, they did. And now I can’t find any of them. I think they’re hiding in the walls or something.”

Another scientist studies snakes with a cobra wrapped around his arm. A third specializes in exotic plants with mind-altering properties.

Into this den of male privilege comes a strong-willed female researcher, determined to join the boys club. She claims to have discovered a lost city in the jungle and presents as evidence a half-naked native covered in blue body paint, who speaks no English.

Imagine a member of the Blue Man Group swinging from a chandelier on stage.

But the presence of a female researcher offends the dour professor of Biblical Science, who objects on gender grounds.

Prof. Sloane: Your science is adequate, but your sex is weak with sin, and led astray with diverse lusts. No offense.

Eventually the guinea pig and the snake get loose, and the blue-painted native triggers an international incident at Buckingham Palace. This play is entirely silly with lots of physical comedy, cutely staged. It affectionately sends up clichés from “Around the World in 80 Days,” “My Fair Lady” and “Tarzan.” The better routines are repeated for comic effect, and they seem to get funnier each time around.

There isn’t a serious bone in this play’s body, but it will keep you giggling for two full hours… which fly by fast.

The B Street Theatre production of “The Explorers' Club” continues through July 26. 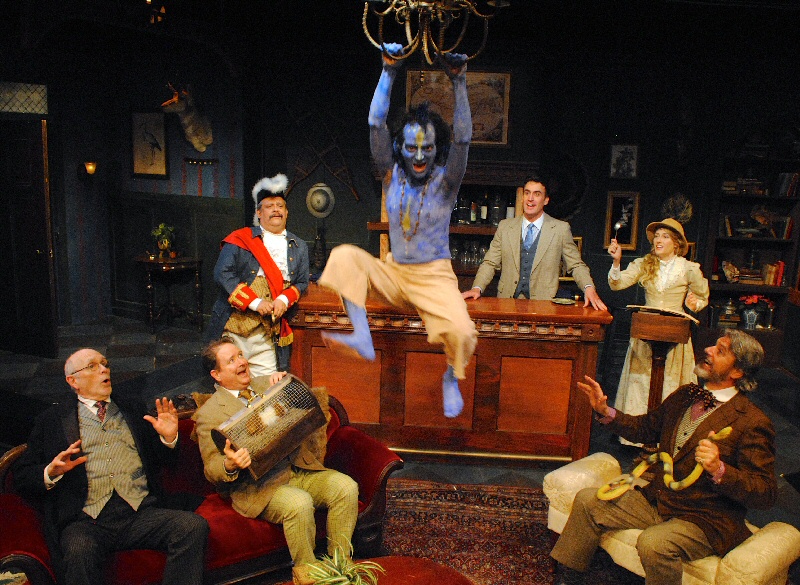