Cycling fans around the world are watching the Amgen Tour of California cycling race this week. The crowds at the event Sunday have an international flair as well.  They sampled the food, spent time with friends, and asked the tour to do more to showcase female athletes more.

About 100 yards from the start/finish line of the 2015 Amgen Tour of California, Adam Dudley raises a large hot dog covered in vegetables.   As he holds the dog aloft, his companion, Jane Dixon, kneels down to take a picture. 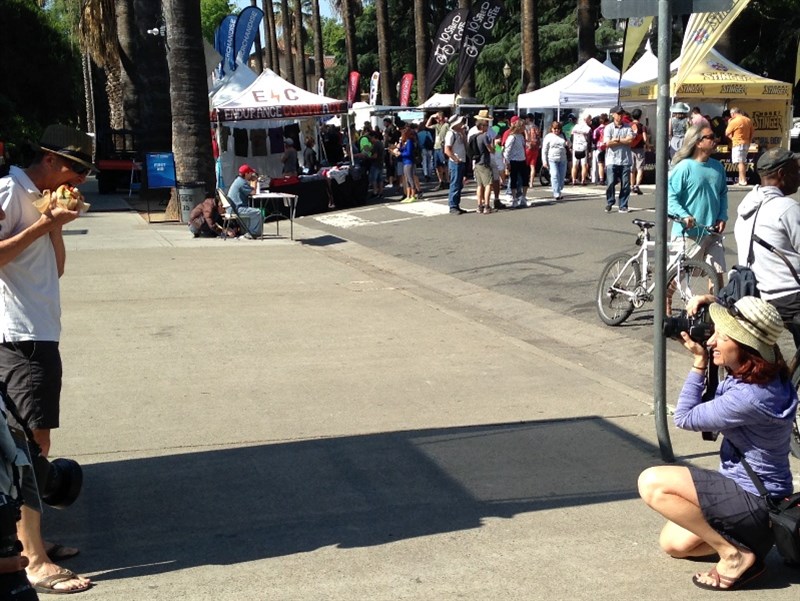 "Best breakfast in the world," he says about the chicken apple, onion bell pepper hot dog. "Absolutely fabulous. Just what you need before riding the race."

Dudley and Dixon are visiting from England.

"This is the first Amgen Tour of California," says Dixon, "but I've been to the Tour de France and a few of the Tour de Britains. My dad's a bit of a cycling nut. You don't speak to my dad for two, three weeks while it's on. He won't leave the TV."

She says the biggest difference in the Amgen and European tours is history, "In France, it's the national sport." 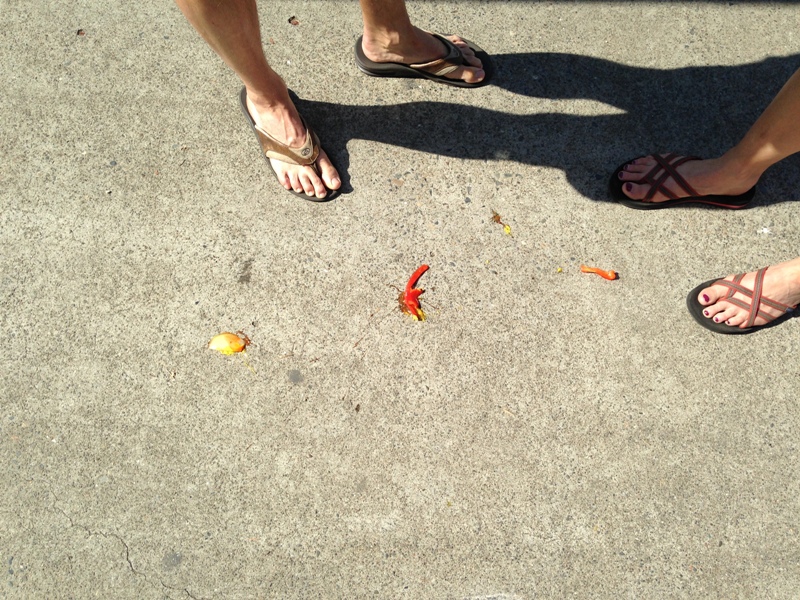 While onions and peppers fall from Dudley's hotdog to the ground, nearby, there are a half dozen men in cycling jerseys who talk bicycle components and give each other a hard time.

"We're here to enjoy the race, because we're just local riders. We just stopped by to watch the race start," says Man Trinh. 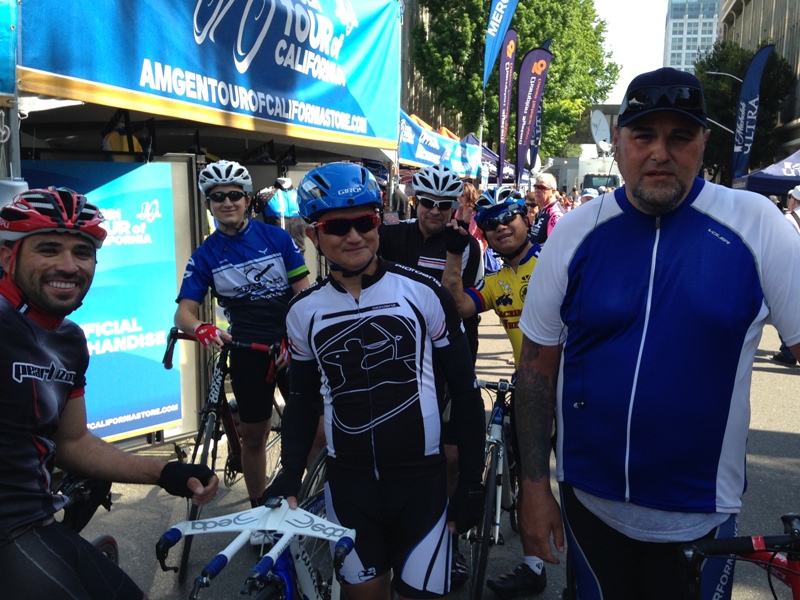 Bob Moffit: How long have you been riding?

Trinh: About for... a couple of months.

But his friends dispute what he's saying.

Moffitt: They're calling you a liar.

His friends say it's actually "a couple of years" and Trinh relented.

Trinh: Yeah, a couple of years.

He says the only difference between the Amgen Tour and the Tour de France is he can see one in person, but has to watch the other on TV. 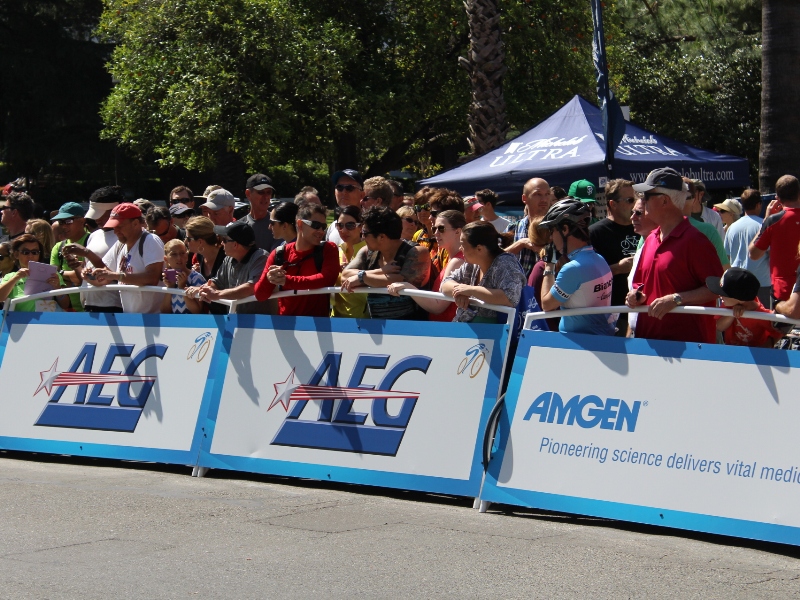 At 10:50 a.m., the public address announcer rallies the crowd into cheering mode and counts down from ten.  The crowd rings cowbells and slaps the plastic barrier that lines the race route. 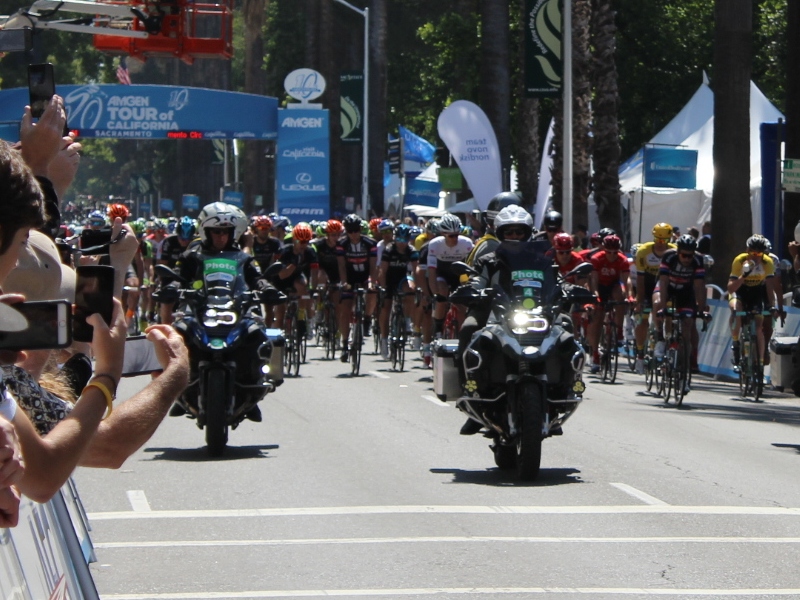 The crowd cheers and the male riders, in jerseys every color of the rainbow, pedal up L Street to 9th, take a left, and then take a right on Capitol Mall. They'll return several hours later.

Support crews with extra bicycles and parts follow in marked cars, as do photographers with cameras riding on the backs of motorcycles.

Television and internet coverage were the only complaint about the Amgen Tour this year -- specifically the coverage of the women's tour. 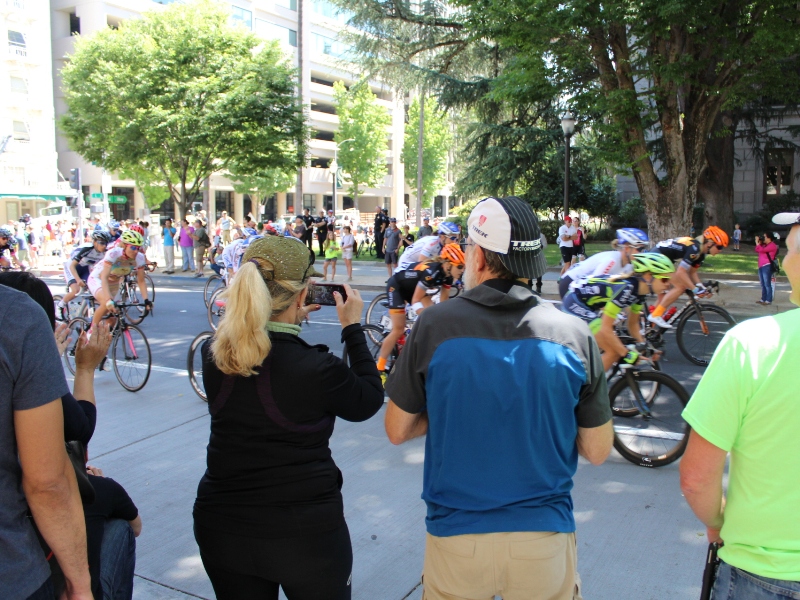 Meredith Meshcini of Sacramento stays in her spot on 9th Street after the men pass and begins talking to friend Gary Button about the women's race, scheduled for 11:15 a.m.  She says it's great the women have four race stages this year instead of the two they had last year. But, she'd like to see Amgen and race organizer AEG do more to encourage interest in the women racers.

"I think one of the things that bothered me when they were advertising this on television and on the news shows, they just talked about the men taking off at 10:40 or 10:45 this morning," says Meschini. "They didn't mention the women are taking off at 11:15. A lot of people were shocked when we said there's gonna be a woman's race." 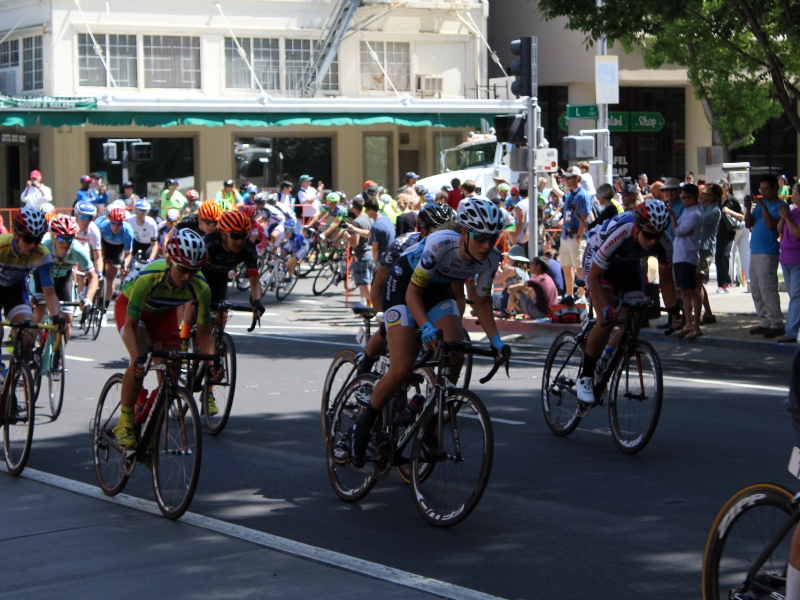 "It's in its infancy, but it stays in its infancy when people don't promote it and push it," she says. "And they should have some of the women on there to really be talking about it."

Soon, the crowd starts slapping the plastic barricades that line the start of the women's race.

Then they're off -an international blur of orange and yellow and green and blue pedaling up L Street- cheered on by an equally-international crowd -- a crowd that hopes to see and hear more about them during next year's race. 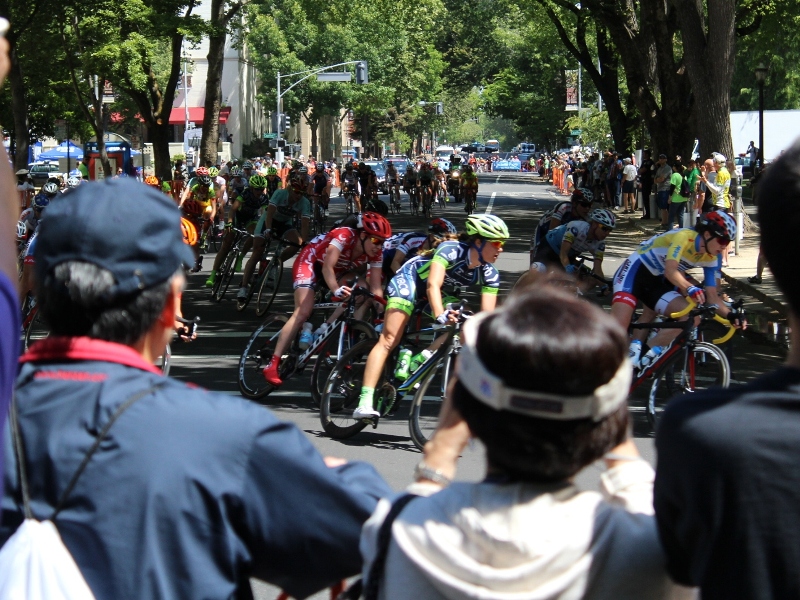 Mark Cavendish of England leads the men's tour after day one. Leah Kirchmann of Canada leads the women's race. 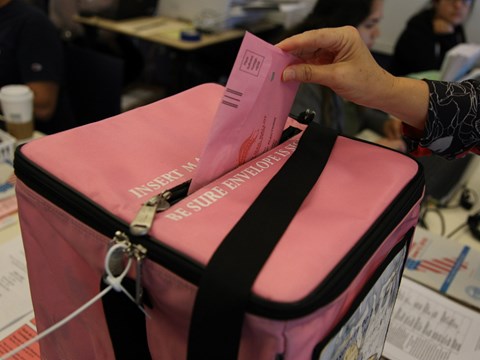