Voters have soundly defeated an attempt to raise California's cap on medical malpractice damage awards, after physician and insurance groups poured tens of millions of dollars into the opposition campaign.

The duel matched doctors against trial lawyers in the most expensive campaign in the state this year and produced a barrage of negative ads.

The initiative attracted national attention, in part because it called for making California the first state to impose random drug and alcohol tests on doctors.

But the reason the contest lured more than $60 million in donations was its proposal to lift the cap on damages for pain and suffering caused by doctor negligence to $1.1 million, up from $250,000.

Nevada voters rejected an initiative to impose a 2 percent tax on businesses making $1 million annually to raise money to fund schools in a state near the bottom nationwide in per-pupil spending.

But foes called it a margins tax that would hurt businesses and wouldn't necessarily benefit schools.

The Coalition to Defeat the Margin Tax advertised heavily, funded with more than $4 million from corporate and commercial donors led by the Las Vegas Chamber of Commerce, insurers, building contractors and Sunrise Hospital & Medical Center.

They outspent the Education Initiative PAC more than four-to-one.

Backers were largely funded by unions including the Nevada State Education Association.

The suburban Sacramento 7th congressional district is one of the most competitive House districts in the country.

Democrat Ami Bera is a freshman Congressman running for a second term.

Both Bera and Ose consider themselves politically moderate.

There was only one debate between the two.

But, the competitive race was seen as a key to the balance of power in the nation’s capitol between Democrats and Republicans.

And that brought in money - a lot of it - to both campaigns.

The Center for Responsive Politics said more than $20-million was spent in the Bera-Ose race, with an estimated two-thirds of that money coming from outside groups.

The CRP said it was the most expensive House race. 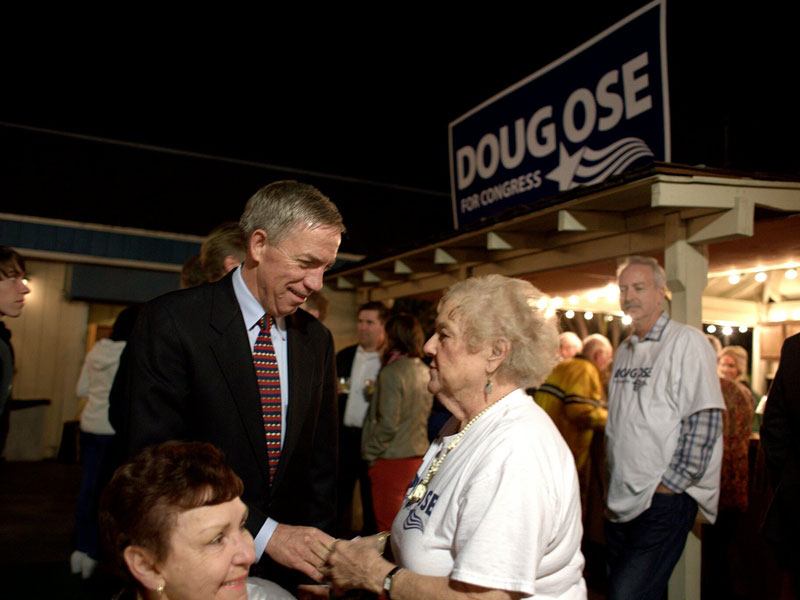 Nevada Republican Gov. Brian Sandoval has been re-elected to a second term in a landslide against little-known Democrat Bob Goodman.

Goodman won the Democratic nomination by finishing second to "none of the above" in the June primary. The 80-year-old Las Vegas businessman raised less than $10,000 for the general election compared to Sandoval's campaign fund totaling more than $3.7 million.

The winner of that race stands to inherit the governor's mansion should Sandoval decide to leave midterm to challenge Senate Majority Leader Harry Reid in 2016.

The Democratic incumbent decisively defeated Republican Neel Kashkari on Tuesday after a lopsided campaign in a state dominated by Democrats.

The 76-year-old Brown is already the state's longest-serving governor. He logged two terms in the office from 1975 to 1983 and made history again by winning the fourth term.

Brown argued during the campaign that he led a comeback by the state after the recession cost California more than a million jobs.

His victory came amid a tough political environment for Democrats nationally, with widespread voter discontent with President Barack Obama.

Brown, the nation's oldest sitting governor, would be 80 when his final term concludes.

CapRadio's Katie Orr is reporting that Kashkari is expected to make his concession speech.

NPR hosts Melissa Block and Robert Siegel are hosting an election night party from NPR headquarters in Washington, D.C. The site is optimized for TV or coffee table use, and offers an audio-visual blog and a unique look at the balance of power in the U.S. Senate and House of Representatives. 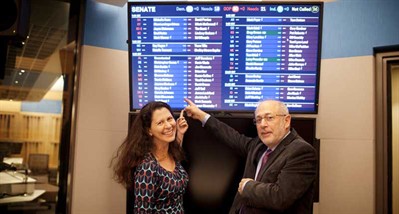 By the Numbers: California’s November 2014 Election

The polls have been open about an hour in California on this Election Day. Voters will choose a governor, other state office holders and most state lawmakers. They'll also weigh in on local races, including Sacramento City Council seats and Measure L - known as the Sacramento's "strong mayor" ballot measure.

Capital Public Radio's Jenny O'Mara has been out at polling places this morning and joins us live. Good morning Jenny - what have the crowds been like?

JO: I'd say perhaps crowds is not the correct term to use. I was in a polling place in Rancho Cordova this morning and it was really more a matter of people trickling in ones and twos. Let's put it this way, there was no line to get to a voting booth.

A new Field Poll predicts record low turnout of roughly 46 percent. What are you hearing from voters about why they felt it was important to vote today?

JO: Of the voters I've talked to it's more about the local races. Some people said they had to remind themselves to get out and vote this election.

More than half of voters are expected to cast their ballots by mail this election -- and that includes many who wait until the last minute and drop their ballots at the polling place. Are you seeing a lot of that this morning?

JO: You can turn it in today. They do caution you sign it in the appropriate spot. Don't just drop it off make sure it's signed. 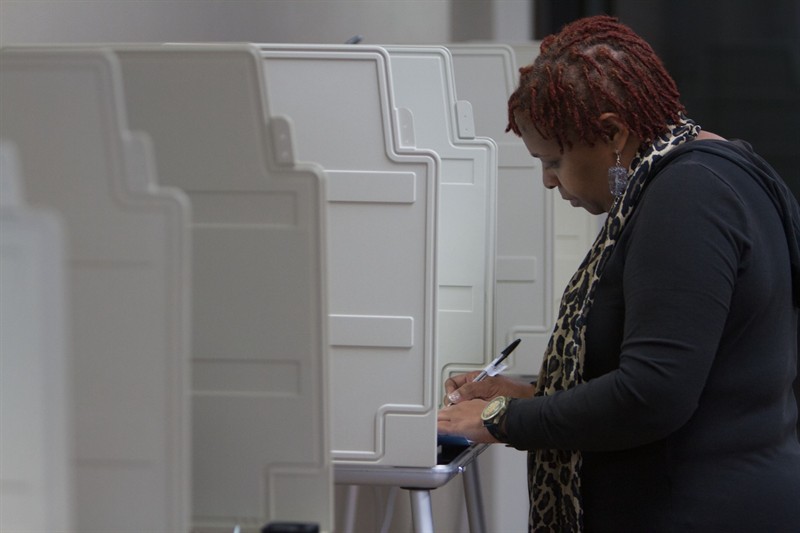 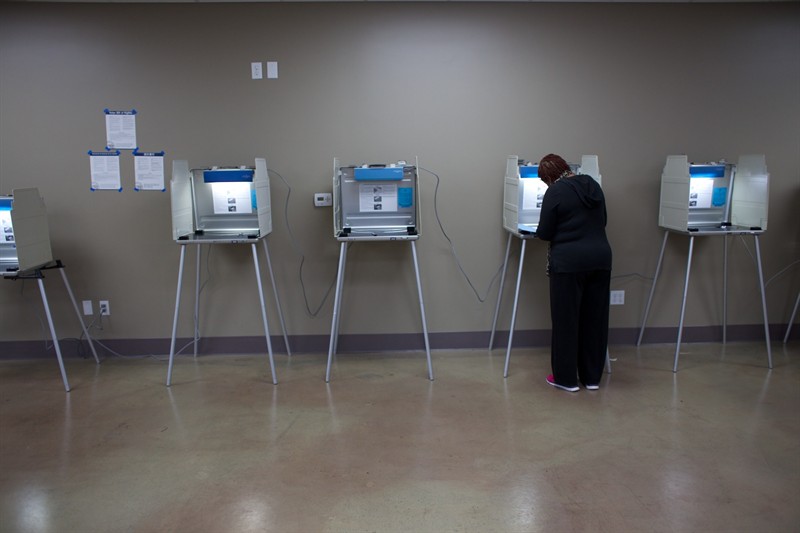 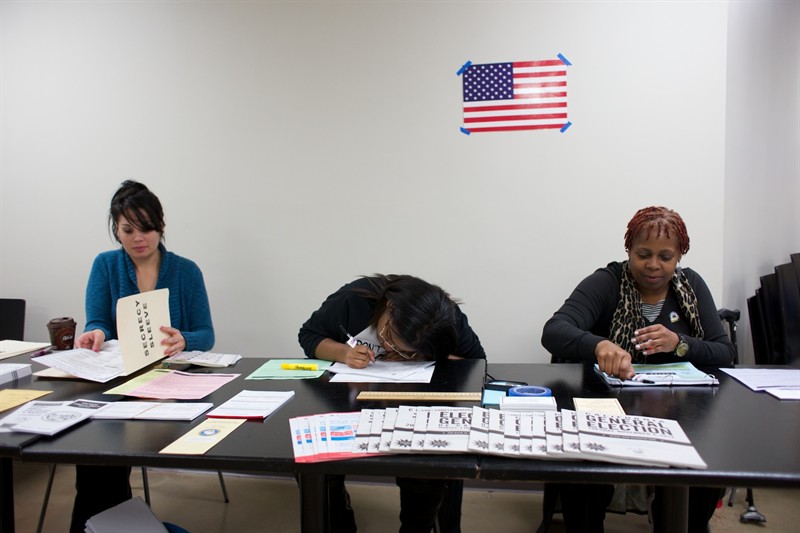 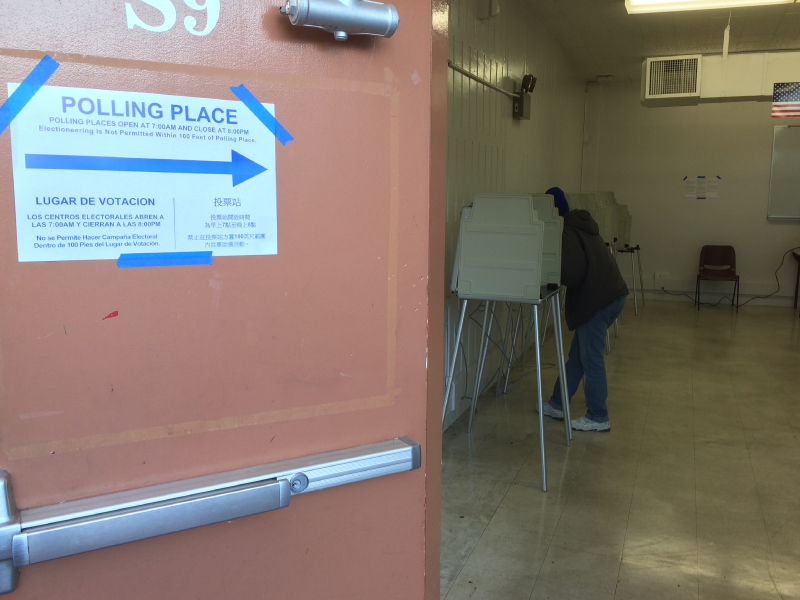 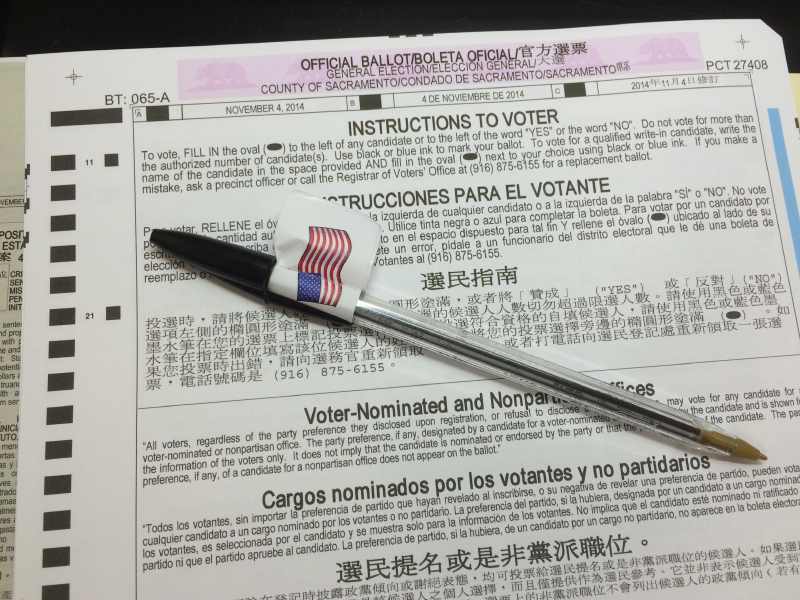 Photos by CapRadio's Al Gibes taken at 7:30 a.m. at Encina Preparatory High School, 1400 Bell St. in Sacramento County in the Arden-Arcade area.
Follow us for more stories like this