UPDATED 10:20 P.M. - The King Fire continued to advance Tuesday night, forcing officials to close a stretech of Hwy 50 in both directions from Sly Park to Fresh Pond. Additional evacuations have been ordered, including for the entire community of Swansboro.

Cal Fire reports that 500 homes remain threatened by the fire. There are 2,466 personnel on the incident.

As of late Tuesday, the fire stood at 12,780 acres with 5 percent containment. Strong canyon winds and heavy timber are making it difficult to fight the fire, according to fire officials.

Crystal Basin - Hwy 50 east of Fresh Pond to Icehouse, North on Icehouse to Wentworth Springs, west to just above Quintette, to include campgrounds and businesses.

Mandatory evacuation advisory for the entire community of Swansboro, north of the South Fork of the American River between Brushy Creek and Rock Creek. For a full list of the individual roads go to the Sheriff's blog at http://http://pio.edso.org/. 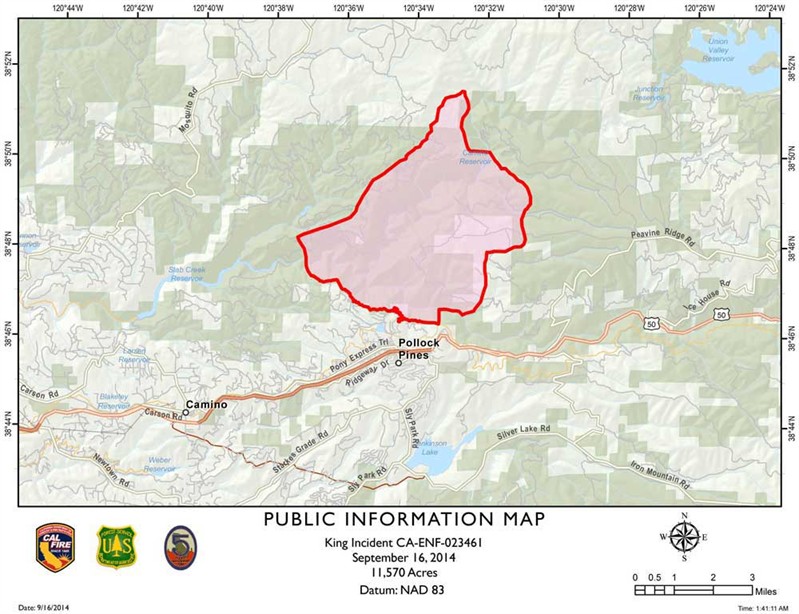 The wildfire stands at 5 percent contained.

Evcuation orders remain in effect and a new voluntary evcuation advisory has bee in issued for the entire community of Swansboro.

Tuesday night, a new evacuation shelter was set up at the Camino Seventh-Day Adventist Church in Camino, Calif.

The King Fire burning near Pollock Pines has more than doubled in size to 8,600 acres

Yesterday, the fire prompted the closure of the westbound lanes of Highway 50 for some time.

Hundreds of people have been evacuated and Cal Fire says 500 homes are still threatened.

The American Red Cross has set up a shelter, which is now located at a church in Camino, according to YubaNet.com. For the past couple of days it was at a middle school.

On Monday, evacuees trickled in and out of the shelter looking to see where the fire has spread, and when they can return home. When a sheriff came knocking on doors Sunday morning telling people to evacuate, some arranged to stay with family. For others, the only option was the shelter.

“You never really think the fire’s going to be as close to you. You see it on the news. And all that. But it’s really happening and hopefully it’s going to be alright soon.”

Keith McGregor slept at the shelter. He works at the local Safeway.

“I had to take off work today because I left my insulin at home and didn’t shower they don’t have showers here and I’m just really depressed, the main thing is I miss my cat, because that’s all I have, I don’t have my family.”

The Red Cross says it has served at least 100 meals so far – and the shelter will stay open as long as it’s needed.

Alderette and her husband took yesterday off from work, and their six-year-old daughter’s school was closed.

Meanwhile, a wildfire in town of Weed near Mount Shasta burned a church yesterday and damaged or destroyed 100 homes, prompting evacuation orders for at least 1,500 people. The fire prompted the closure of Interstate 5 for a short while and knocked out power to most of the town.