Hot, dry conditions and heavy fuel combined to feed the Sand Fire, which stood at 4,000 acres Saturday evening. Additional evacuations have been ordered, as more than 500 structures now stand in the fire's path and more than 1,460 personnel are assigned to the incident.

Five residences and seven structures have already been burned in the blaze that has reached an area five north of Plymouth, California. The fire started late Friday afternoon near Highway 49 and Sand Ridge Road, at the Amador-El Dorado county line.

Cal Fire officials say a vehicle in dry vegetation is the cause of the fire. 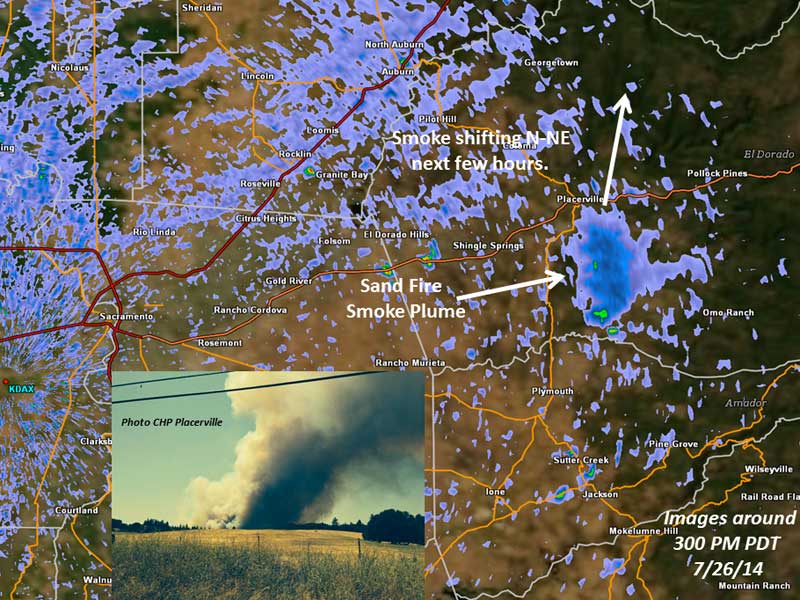 A heavy air assault on the Sand Fire is continuing Saturday, with three addtional planes added to the incident, according to fire officials. Firefighters are starting back burns on Freshwater lane in an effort to lessen the fuel in the fire's path.

The fire is moving towards the Spanish Creek area, and additional evacuations are being considered. Several additional roads in the fire area have been closed.

The Amador County fair, which runs through Sunday, is accepting animals for shelter from the fire, and officials report they have already taken in several horses, rabbits, chickens and kittens. The fair is working closely with Amador County Animal Control.

Additional space for housing aminals is being prepared, and those in need of a refuge for their animals should contact fair staff at 209-245-6921.

Anyone evacuating with animals call the amador county fair at (209)-245-6921 and they will assist you. #SandFire #amadorcountyfair

The Sand Fire, which grew quickly late Friday afternoon and evening from 50 acres to 1,300 acres, is now 20 percent contained. Officials say the blaze near Highway 49 and Sand Ridge Road has consumed five homes and seven outbuildings, and another 250 structures are threatened by the fire's path.

The American Red Cross said via Twitter that 24 people registered at an emergency shelter set up at the El Dorado County Fairgrounds in Placerville.

KCRA reports that a 200-pound tortoise was rescued from the fire zone, and posted a photo to Twitter:

Unbelievable! A 200lb tortoise was just rescued from #sandfire in CA. pic.twitter.com/m5xuJywc16

Firefighters are working in very rugged terrain, and will be dealing with high temperatures today, as the forecast calls for a high near 100 degrees. More than 670 personnel are working the fire, according to the Cal Fire incident report.

Five air tankers and seven helicopters are assigned to the incident, dropping flame retardant and water onto the very dry fuel in the forest. There has been one minor injury, and the cause of the fire is under investigation.