Firefighters are making progress on the Sand Fire, as the 1,300 acre blaze was 20 percent contained as of 10:30 p.m. There are 500 firefighters on the incident, and two structures have been burned.

An evacuation center for the Sand Fire has been set up at the El Dorado County Fairground in Placerville. The American Red Cross says more than a dozen people have registered for the center as of 11 p.m., and that pets and horses are welcome at the center. The main entrance to the fairgrounds is closed, so evacuees are asked to use the entrance near the Denny's Restaurant side of the facility.

Fire officials say that dozens more homes are threatened by the blaze. The fire slowed after sundown, as the winds calmed and temperatures dropped from the earlier highs near 100 degrees when the fire started.

The cause of the fire is under investigation. The fire spread quickly, burning up both sides of a steep canyon near Highway 49 and Sand Ridge Road.

The air attack of the fire was suspended after dark, and will resume Saturday morning. 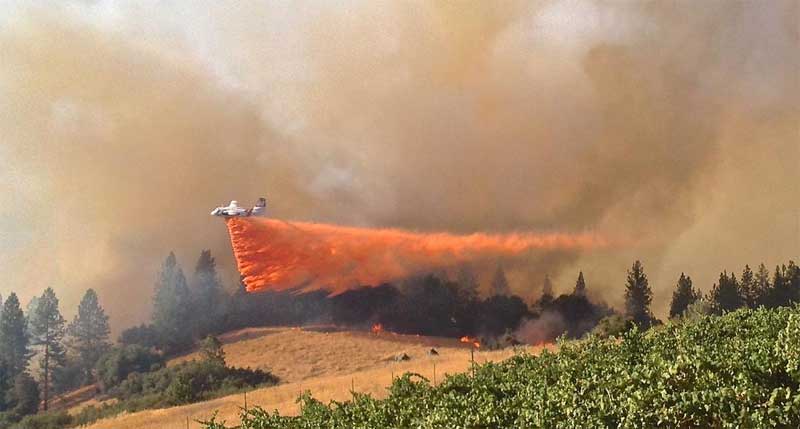 El Dorado County Sherrif spokesman Jim Byers said flames from the Sand Fire are shooting 100 to 300 feet into the air in the rugged canyon near the Amador County line.

The fire is burning near the the El Dorado-Amador county line neary Highway 49 and Sand Ridge Road. The blaze is now heading both northeast and southeast.

Between 30 and 40 homes in the Sandridge Road-Freshwater Lane area have been evacuated.

California Highway Patrol in Placerville is reporting that Highway 49 is not closed, which is contrary to earlier reports.

The Sand Fire, burning near Highway 49 and Sand Ridge Road north of Plymouth has grown to more than 1,300 acres, and is 0 percent contained, according to a tweet by the Interagency Incident Management Team.

The blaze is being battled by six air tankers, 100 engines and more than 10 hand crews. A tweet from Cal Fire reported the blaze at 600 acres, and just 29 minutes later the fire had more than doubled in size, to 1,300 acres.

Evacuations of some homes in the path of the fire have been ordered, and Highway 49 has been closed at Sandridge to the Amador County line due to the fire.

At least 10 fire engines and two command officers from Sacramento County Fire Department are enroute to the Sand Fire, according to a Tweet from the Consumes Fire Department. Other agencies battling the blaze include Sacramento Metro, Folso and Wilton fire departments.

At least one home has burned in the wildland fire at the El Dorado-Amador county line. Video shot from the KCRA news helicopter shows a house fully engulfed in flames. More structures appeared to be in the path of the blaze.

The fire continues to be fought by air, with helicopters and air tankers. Smoke from the 50-plus acre fire can be seen from much of the Sacramento valley.

The fire has been named "Sand Fire," as it burns near Highway 49 and Sand Ridge Road, north of Plymouth.

California Department of Forestry and Fire Protection crews are fighting a wildland fire that has burned about 50 acres in southern El Dorado and northern Amador counties.

Tinsley said no structures are threatened and no evacuations are in effect.

Ground crews are being assisted by helicopters and fixed-wing aircraft. 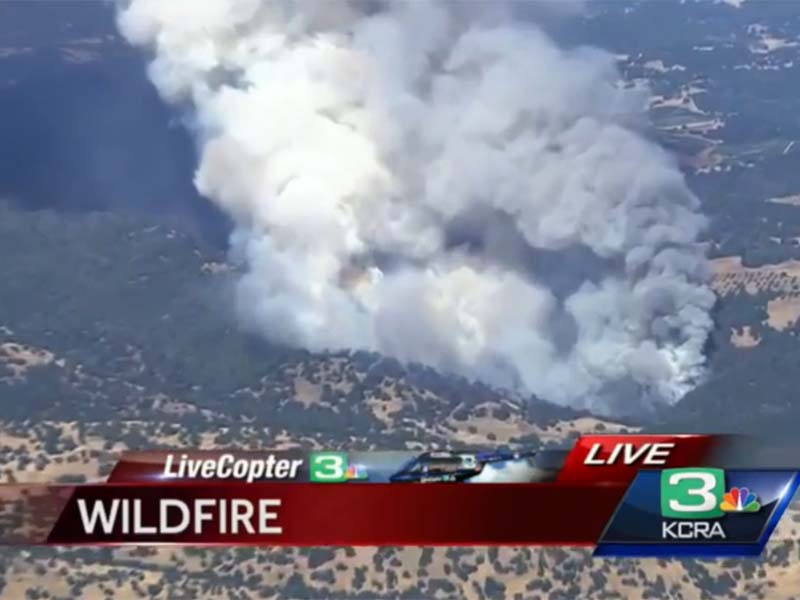 More #SandFire photos @CAL_FIRE. More thoughts and prayers to our neighbors up the road on Upton RD. pic.twitter.com/xQCr3CRF7t

CalTrans twitter page is reporting Highway 49 closed due to the fire. This is incorrect. Per the on scene CHP Sergeant, Highway 49 is open!

The Sand Fire. As seen from 22,500 miles up pic.twitter.com/hUbCmDvatZ

The CalFire incident is now at 1300 acres and 0% containment.