When one Central Valley couple learned their private well might run dry in a matter of months, they formed a plan.

Verna Ward says she had been putting money away since last summer. Along with money earned after her husband, Al, sold his pickup truck, she says, the couple have enough to put in a new 300-foot-deep well for their home. It costs $15,000.

As groundwater levels continue to drop in the Central Valley, many homeowners are finding ways to cope and to prepare -- in case their private wells running dry.

The Wards say the first sign of trouble came one day last September when they turned on the faucet and nothing came out.

They had managed to drop the well’s pump three feet lower, to buy some time. But a long-term solution is to build a new well – a process that means paying tens of thousands of dollars and waiting for months.

The Wards had been placed in a waiting list with a well-drilling company and have been scheduled to have a new one installed.

In the meantime, the Wards say they have been careful about their water use. 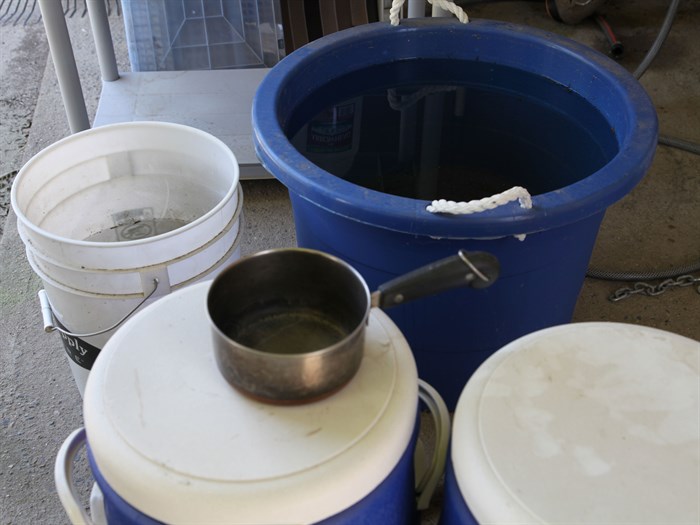 Al has set up a 50-gallon tank to store water in the backyard. They haul in water when they need to flush toilets, and they buy a lot of bottled water.

“We’re not watering lawns or anything,” says Al.

The Wards are not alone. In their small community of Easton, population of about 2,000 just outside of the Fresno, they can easily list several families – neighbors and acquaintances - who are facing the same future.

Because of California’s drought, many people in the Central Valley - from farmers to homeowners – are finding that they have to dig or install deeper wells.

In Fresno County, the number of well permits nearly doubled this year compared to last year.

Aside from the cost and months-long waiting period, homeowners must also follow specific rules from the county on where the drilling can occur. And they have to apply for permits to put in the wells.

When asked who is to blame for the lack of water, the Wards point to the drought and the fact that their region is essentially a desert.

“We know that … if it wasn’t for groundwater, this area’d be barren,” said Al.

He says one benefit of the drought is that farmers are now refocusing on drip irrigation, which reduces water consumption.

“Drip irrigation, you see a lot of that going on, which is a big help,” he says. “They should have done that years ago. A lot of them did, but now they’re kind of forced to.”

“They’ve got to grow crops to make money, so it doesn’t bother me that the farmers are using the water,” she said.

But they say they’re aware the food prices might be going up because of the drought.

“The next time we go shopping in a few months, it’ll bother us,” says Al.

Verna agrees, “The price of food is going up, of course, because of this. That’s just the way it is.” 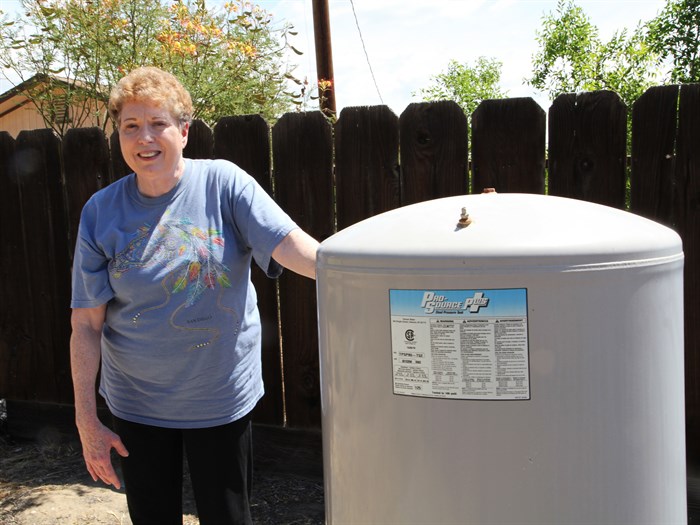 Verna Ward stands next to her well, which is running dry. A well-drilling company suggests that the couple build another well on the property. Marnette Federis / Capital Public Radio

The retired secretary and former school district employee are on a fixed income. So, they say, they’re careful about their spending. They say they are faring better than others.

"It’s not easy, but luckily we have enough in reserve," says Al.

Sue Ruiz, with Self-Help Enterprises, says it’s essential for homeowners to plan ahead for the possibility of that a  private might go dry.

“If you’re lucky enough to live in a community, you put a hose next to your neighbors if your neighbor happens to have water, and you can live off a hose for a while,” she says. “Drink bottled water so you’re not drinking unsanitary water and still take your showers, short showers. Don’t water your lawn. Don’t do laundry too much. Don’t run your dishwasher. Just be conservative with the water and survive.”

Ruiz says it is the community’s “pioneer spirit” and having a mindset of self-sufficiency that are helping families get through.

But, she says more should be done to educate people about conservation, Ruiz said.

”The education part, I don’t think has been happening like it should have been in the Valley,” she said. “I think some more resources need to be placed into the education piece for communities and individuals … and maybe the legislators too.”

Currently, state officials are discussing better ways to manage groundwater and what to do in light of the increasing demand.

“I think that management of groundwater is probably very necessary,” Ruiz said. “I personally like as little regulation as possible, but I’m also understanding that because the resources is finite, that something has to be done to manage it.”

Verna and Al Ward, who live in Easton California explain how they're dealing with the drought. Video by Marnette Federis /Capital Public Radio