Sacramentans Get A Taste Of Poetry Through Pop-Up Performances

It's a typical Thursday night at Luigi's Slice in Sacramento’s Midtown neighborhood. Customers trickle in for a quick bite or to pick up a box of pizza for dinner.

Suddenly, Andru Defeye* pulls up a chair in the middle of the restaurant and yells at the top of his lungs:

"Attention fellow human beings, this is an experiment in being human..."

It is an experiment, indeed, as the customers cast doubtful looks toward Defeye. Then, one after the other, five others follow him, each performing a poem.

Paul Willis brings a poem about the struggle of an artist:

“I guess my success wasn't about the money or the fame, I pour my heart onto this page, performing for rooms half empty. I walk or take the bus, I'm not pushing a Bentley, starving artist, with a couple of dollars in his pocket….”

Terri Grace is standing by and she’s full of energy when her turn comes:

“I come hard, but not for me, but for the power that empowers us to be, I can't rap but I can speak, I'm not famous, but I can lead….”

Then, Aerial* fires off a rapid series of words:

“The good die young, and the fast die young, but the rest of us probably would die to be free…”

Finally, Luke Tailor* finishes with a poem that takes a glimpse at current events:

But there’s a surprise. A sixth man, unknown to anyone in the group, jumps in at the very end:

That type of spontaneous performance is what these “guerilla events” are all about, Defeye says.

“I thought it was unique, very unique,” says Michelle Sims, who watched the Luigi’s Slice performances. “I think they should do it more often, different places, they can put more smiles on people’s faces. It’s uplifting.”

There's no specific order, no pre-determined format, just a handful of artists spreading their form of poetry to the public. The entire event takes about 10 minutes.

“We just go into spots and kind of take it over,” says Defeye. “Most of the time they don't know what's going to hit them and it's sporadic.”

Defeye also hosts two well-known open mic slam poetry and hip-hop events in Sacramento. One called #themostopenmicinthecity is held at The Brickhouse Gallery in Oak Park. Defeye says the event is true to its name and welcomes anyone and everyone who can perform.

Earlier in the year, people who participate in #themostopenmicinthecity organized what they call “guerilla art, flash mob events,” mimicking what goes on at the open mic. But these performances are held informally at various Sacramento restaurants and businesses.

Performances usually start the same way -- with an introduction from Defeye. Then the artists follow in succession. Sometimes musicians jump in with instrumental backing and the entire event transforms into a giant community jam. Some of these flash mob events, Defeye says, have attracted as many as 100 people.

In honor of National Poetry Month in April, members of ZFG put together smaller events for unsuspecting audiences throughout Sacramento.

These pop-up poetry include gatherings at the light rail, inside a grocery store, while standing at a street corner and at the Old Soul at 40 Acres coffee shop in Oak Park.

A smaller version of the flash mobs, the April gatherings allow poets to choose pieces relating to the event’s location. Defeye says the idea is to make poetry come alive, create excitement and to bring art where people might least expect it.

“This is us trying to build that awareness that poetry isn't all red roses and violets being blue,” he says.

It also challenges the artists – requiring them to perform before audiences that may not be accepting or open to the ideas they are presenting.

“If you sit down and recite poetry to a roomful of people who are already open, it doesn't change the world, you only change the world by opening new minds and expanding and that's what this is all about,” Defeye says.

The performers incorporate slam poetry style and infuse hip-hop into their delivery of a verse.  They touch on both the personal and the political -- from adversities to inequalities.

Five years ago, Defeye moved to Sacramento from the Bay Area and found a city full of talented, young hip-hop artists and lyricists.

“I feel that Sacramento has more talent per capita than San Francisco or any of those cities, they just don’t know what to do with it and they don’t know how to get it out there,” he says.

Slam poetry is nothing new to Sacramento, but it’s seen more growth in recent years.

“It is a growing scene, it is definitely a blossoming scene,” says Defeye.

So far, the reaction has been mostly positive from the flash mobs and National Guerilla Poetry Month events. That gives Defeye and the rest of the crew a chance to talk to the wider community about Sacramento’s thriving slam poetry scene. 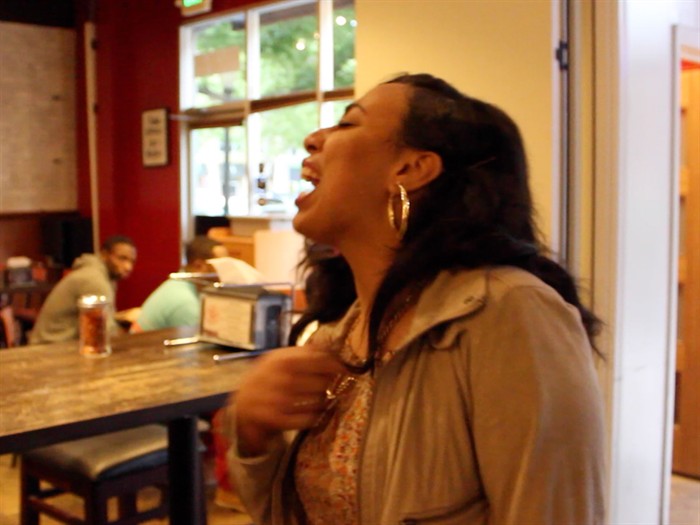 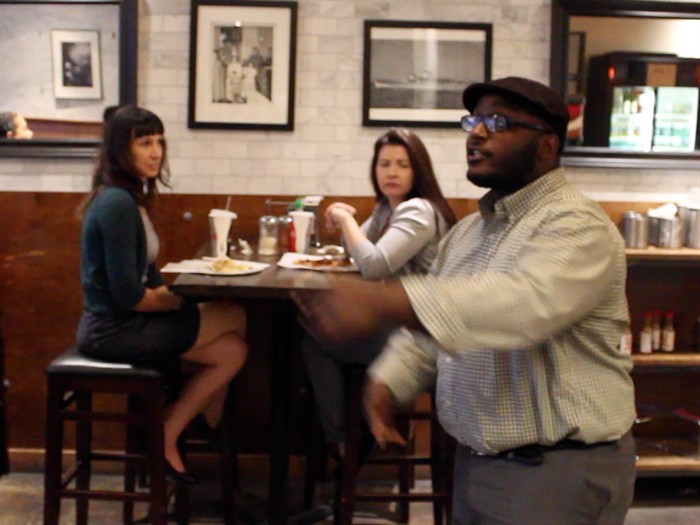 Pulling up ‘A Seat at the Table’: Elk Grove bookstore and cafe celebrates first anniversary