An unusual relationship between a 91-year-old woman and her 21-year-old grandson -- who’s in the midst of a cross-country bicycle trip -- is the focus of this Pulitzer-nominated drama. It glitters with uncommon insights about life and death.

When the doorbell rings in the middle of the night, elderly Vera finds her bedraggled grandson Leo at the door with his touring bike. He’s pedaled from Seattle to New York, he’s smelly, and clearly the kid is troubled. Given the hour, the feisty old grandma asks an obvious question.

Vera: Are you high?

Vera: Well, it’s three o’clock in the morning, so I’m just asking. Have you had anything to eat in a while?

Leo has dropped out of college, he isn’t speaking with his parents, and it becomes clear that the 4,000-mile bicycle trip was marred by some shattering event, which he isn’t quite ready to discuss. In the meantime, grandma tries to help him out of his funk by discussing the old days, when she and her late husband were proud New York City leftists. The grandson, a rebel himself, swims into this topic like a frisky duckling entering a pond.

Leo: When I did that semester at Evergreen, I took a class on Marx. Best class I took.

Vera: What does your mother say about that?

Leo: About me studying Marx? I think was like, ‘How is that going to be useful for you in the future?’ 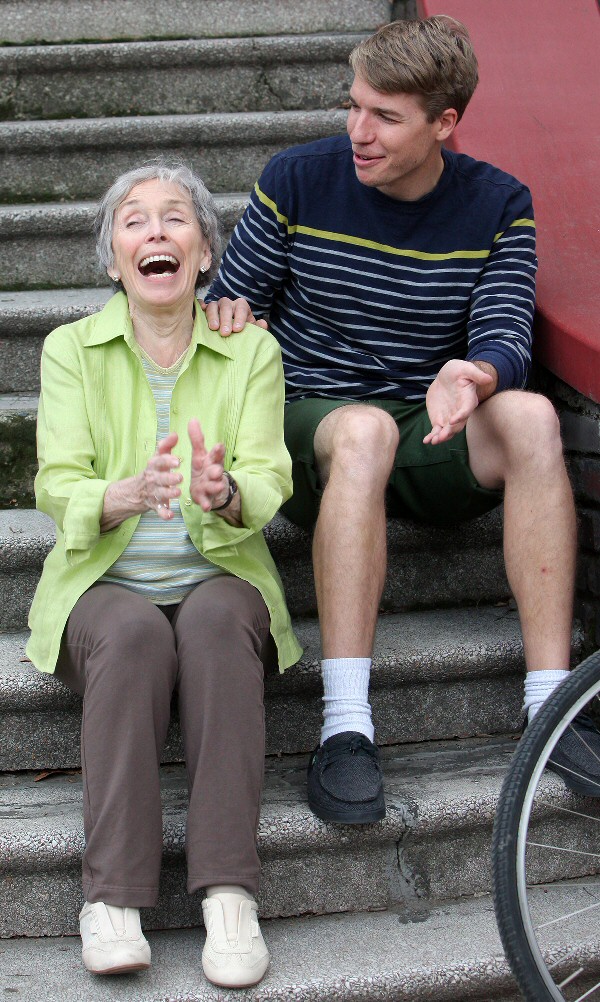 Leo’s having a tough time figuring out what path he should take in life. His girlfriend’s gone back to college, and put their romance on ice. And he’s hung up on the memory of a ghastly accident during the bike trip – much as his 91-year-old grandmother feels lonely after the death of her husband, and almost all of her longtime friends. The reverberation between the loss that these two are experiencing gives this play considerable dramatic depth along with its comedic moments

Playwright Amy Herzog skillfully maneuvers her characters into surprising situations that trigger memorable conversations and disclosures. And the staging of this intergenerational story cleverly weaves the charmingly rebellious characters together in scenes that are both funny and tragic, but always feels sincere. The cast includes veteran actress Dee Maaske, a longtime stalwart at the Oregon Shakespeare Festival – her performance as the grandma elevates a strong production into one of the best shows mounted locally this year.