A semi-truck filled with juvenile salmon from the Coleman National Fish Hatchery is backing up to a pipe.

Thousands of fish are then shot through the long pipe and into three large net pens in the Sacramento River in Rio Vista.

This is the beginning of what state and federal fish agencies are calling a Herculean effort to save fall-run Chinook salmon.

Over the next 22 days, 12 million fish will be released here instead of swimming 270 miles down the Sacramento River to the ocean where they will feed for three years. 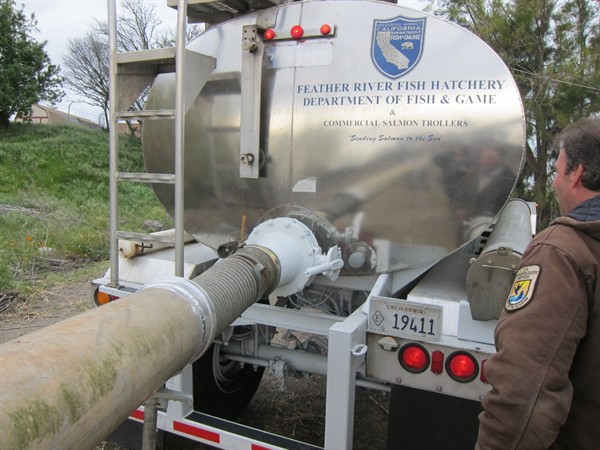 “This operation is huge," says Stafford Lehr with the California Department of Fish and Wildlife. He says the state also plans to truck and release almost 19 million salmon.

"We’re talking 240 semi-tanker trucks that will be working over the next two and a half months, just the collaborative effort with Coleman is about $400,000 in terms of state cost,” says Lehr.

The cost of not trucking the fish could be much higher. These are hatchery salmon that support not only recreational fishing, but an entire commercial fishing industry.

John McManus with the Golden Gate Salmon Association says salmon fishing provides tens of thousands of jobs and has more than a 1.4 billion dollar impact on the state’s economy.

“If we didn’t truck these fish under these drought conditions, we believe we’d likely lose them all," says McManus. "It means the difference between us being closed down like we were in 2008 and 2009 with no ocean salmon fishing, versus what may turn out to be a decent year.” 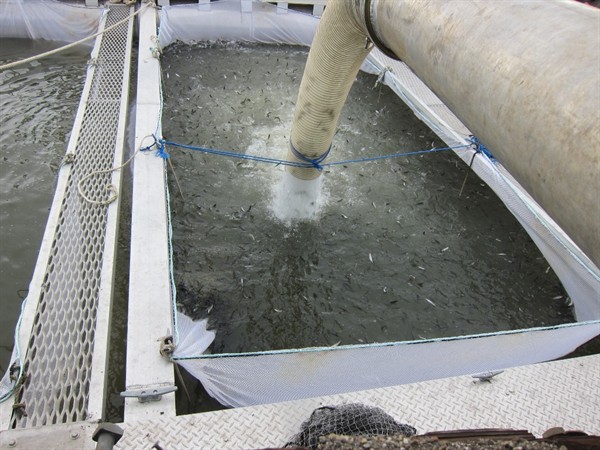 Delta Cross Channel gates that prevent them from getting killed in pumps at the state and federal water projects have had to remain open during the drought.

“Juvenile salmon that get sucked into the Delta Cross Channel they never come out, it’s essentially a black hole.”

McManus and his group have pushed state and federal agencies hard to make the decision to transport the fish.

It’s not something fish agencies necessarily like to do. In normal years fish are released in the waters where they were hatched. They know to return there to spawn. Bob Clark with the US Fish and Wildlife Service says trucked fish may be confused.

“The issue for us is when they return three years from now, because they haven’t made the migratory path they’ll stray to other parts of the Delta and we won’t get as many fish back to the hatchery,” says Clark.

The transportation itself can stress fish, confuse them and make them susceptible to predation. 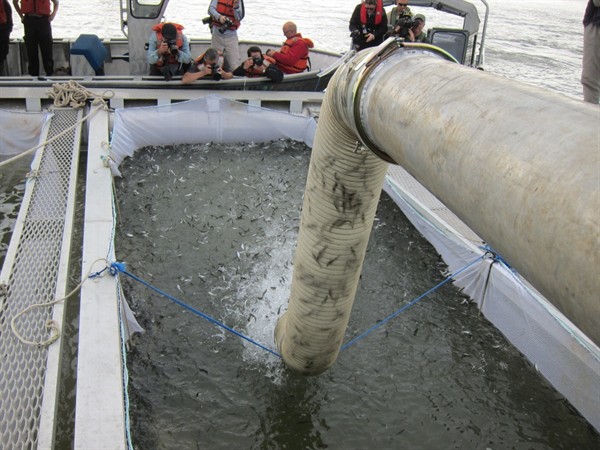 But biologists say transporting the salmon this year gives them a much better chance of survival. Howard Brown is with the National Marine Fisheries Service.

“The potential adverse effects associated with trucking I don’t think are outweighed by the risks of losing an entire year’s class of fish production,” says Brown.

Fish agencies keep the salmon in net pens to adjust to the change and prevent predators from attacking.

They’ll then be released by boat further down the channel. Trucking will help fall-run Chinook. But fish biologists remain concerned about the drought’s effect on wild spring and winter run salmon.

They’ll have to migrate on their own. And biologists fear many won’t make it.