During the cultural burn, participants use rakes to pick up parts of the grass that are on fire and carry it to another patch, thereby spreading the fire further.

Melinda Adams crouched into a patch of tall grass. In one hand, she held a burning bundle of tule and cattail. She held the bundle like a torch and gently held it against the grass. Slowly, it started to catch fire.

She stood up quickly. Then, making her way a few feet over, she repeated the process.

It was a sunny, dry November afternoon — good conditions for burning. The patch of land Adams helped treat lies within the Cache Creek Nature Preserve, a site about a half hour west of Sacramento. The area was once dedicated to mining until it was turned into a restoration area in 1996. More recently, starting in 2019, it’s been a consistent site for cultural burning during colder months.

Adams, a member of the San Carlos Apache Tribe, is an environmental researcher working with UC Davis, where she teaches a class on cultural burning. She helped guide the burn alongside other Indigenous cultural practitioners, like her mentor Diana Almendariz, who is of Wintun, Nisenan and Hupa descent. She described the practice as necessary in reducing the risk of high-severity wildfires, but also as an act of reclamation.

“Cultural fires themselves are land stewardship lessons,” she said. “They're also cultural lessons that we're getting back as Native people.” 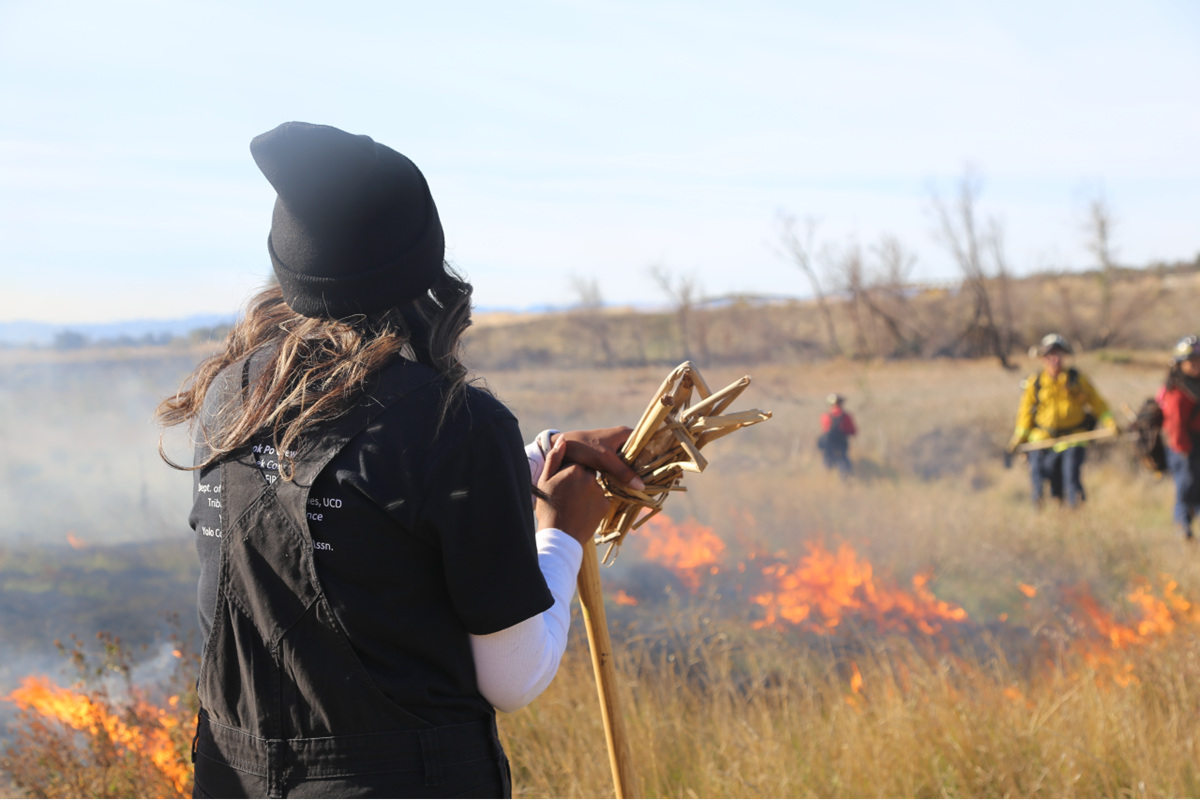 Melinda Adams, an environmental researcher who teaches a class on cultural burning at UC Davis, sets brush on fire with a bundle of tule and cattail.Manola Secaira / CapRadio

Many Indigenous communities throughout California and other Western states historically burned their ancestral lands on a regular basis. This practice kept their environment healthy and was also a key cultural tradition for Indigenous peoples.

But soon after the state of California formed in 1850, cultural burning was made illegal. This was followed up with other policies to suppress fire in the state that would remain for a century.

“That was one of the very first pieces of legislation, when the state was becoming a state,” Adams said.

Indigenous communities have long since advocated for the practice’s return, educating state officials about its cultural and ecological importance. In recent years, they’ve seen success.

“This is actualizing some of the goals that practitioners throughout the state had in returning fire to their homelands and to their communities,” Adams said. “So hopefully we'll see more burns done.”

Leading up to the burn, onlookers — who included a host of researchers and CalFire employees — listened to Almendariz and others explain the history of cultural burning and the plan for the day. At one point, Almendariz had attendees participate by putting together their own bundles of tule and cattail, which would later be used during the burn.

The tule-cattail bundle isn’t exactly a traditional method of starting a cultural burn, Almendariz explained, but the concept of using these native plant species to help along the burn was inspired by knowledge she had about their properties.

“Cattail is very flammable,” she said. “They are oily, so they burn a little longer and slow, and so lighting those would be a good torch.”

Throughout her life, Almendariz said that she’s had Elders and mentors to pass cultural knowledge on to her — knowledge that goes beyond cultural burning, like basket weaving, jewelry making and dance.

“I’ve been kind of raised as a practitioner,” Almendariz said.

Almendariz learned how to do cultural burning from Don Hankins, a Plains Miwok practitioner. She said she first witnessed a cultural burn set by Hankins around 20 years ago. It wasn’t until 2018 that she led a cultural burn herself — for a long time, Almendariz said she learned about the practice from Hankins by watching and listening.

“It just was really nice to have that support system,” Almendariz said.

As she’s grown older, she said she’s passed this knowledge on to her own children and others. Her daughter, Christina Almendariz, and granddaughter, Julie, both attended the November burn.

Julie, 16, said that her grandmother has passed cultural knowledge down to her all her life. One tradition was grinding down acorns for food, which is historically a dietary staple for many Indigenous Californians.

“We would make this acorn meal,” Julie said. “We would go through this whole process of making it, and we would do that every year.”

Then, a few years ago, Julie said she attended her first cultural burn.

“We would cut down all the little plants and then we put it in a pile,” she said. “Then we would let it burn and watch it and keep it controlled.”

Julie said she still finds being close to flames a little nerve-wracking, but she’s also learned to respect it. Her mother, Christina Almendariz, said that this is a key lesson practitioners want to pass along about cultural burning.

“They want to be able to teach you… that fire is not bad, you know, there is good fire,” Christina Almendariz said. “And that's what we're working with, good fire.”