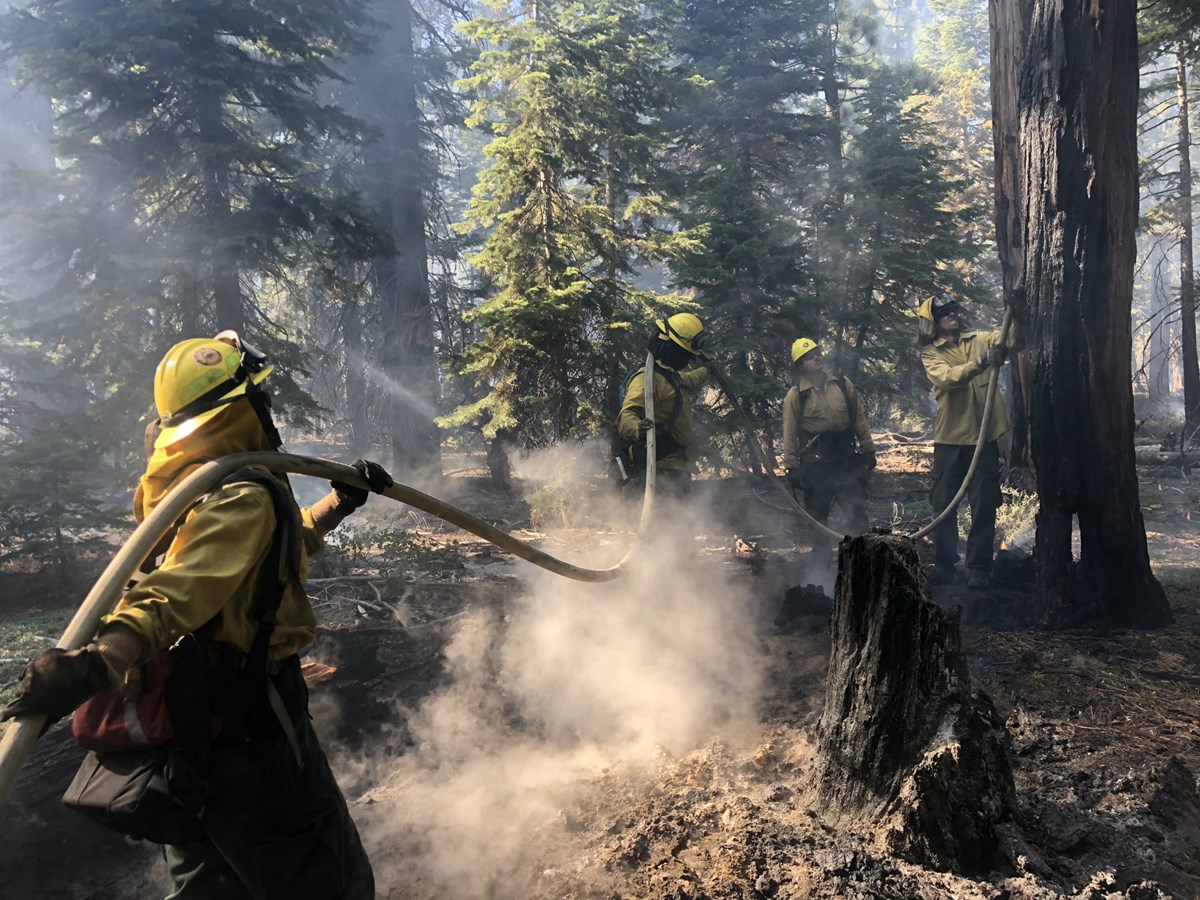 Weather dictates when a prescribed burn can happen and in some cases how long it can burn. In this situation a wind event was supposed to take place so crews put out the fire on its perimeter to make sure it won’t spread as winds begin to pick up.

After decades of fire suppression in California, prescribed burns have regained traction as one method to boosting the resilience of forests during catastrophic wildfires.

California passed Senate Bill 332 last week, which would change liability laws around setting prescribed burns. Advocates hope that this will encourage more individuals to set prescribed burns, which are planned fires aimed at managing forest land and reducing fuel loads that frequently lead to large wildfires, throughout the state. The bill now sits on Gov. Gavin Newsom’s desk; he has until the end of October to decide its fate.

Last year, California and federal officials committed to treating a million acres of forest land annually via prescribed burns and other methods by 2025, more than ever before — but it’s a goal that both remain well short of.

Craig Tucker, a natural resources consultant for the Karuk Tribe, said that it’ll take more than state agencies to reach these goals in time. Karuk tribal government has advocated for more prescribed burning for years, bringing attention to the importance of the burns that have both ecological and cultural importance.

The good news is that California isn’t starting from scratch, Tucker said. Native communities who’ve lived on this land for thousands of years have already “figured out how to live with fire.”

“Finally, you see state and federal agencies tapping back into traditional tribal knowledge,” Tucker said. “And so tribes like the Karuk Tribe, where that knowledge has been passed down from generation to generation, are now playing a larger and larger role in these decisions.”

But despite state interest, prescribed burners still face a multitude of barriers. This year, the Karuk Tribe and other groups — from environmental advocates to ranchers to other tribes — rallied to pass SB 332.

The bill changes current liability laws around prescribed burns by requiring a show of “gross negligence” before burn bosses and cultural fire practitioners can be found liable for burns gone wrong. This standard more closely mirrors those found in other states leading the way on prescribed burns — like Florida.

The state previously required only “simple negligence” to hold individuals liable for burns. This stricter standard made it incredibly risky for cultural fire practitioners and burn bosses to commit to controlled burning.

“The burn bosses themselves could not get insurance coverage for the work that they were doing because of the liability if one of those fires got out of hand,” said Sen. Bill Dodd (D–Napa), who introduced the bill. “Many of them just couldn’t afford insurance, so they couldn’t do the work.”

“Why would you want to grow up and be a burn boss if every time you do your job, you run the risk of being sued for everything you and your family owns,” Tucker asked. “There’s such a disincentive for people to do this work because of these liability issues, so the people who are doing it, I think, are putting themselves at risk.”

On its face, reduced liability could sound alarming. But Dan Porter, California forest program director for the Nature Conservancy, said that it’s important to differentiate prescribed burns from wildfires when assessing the risks. Burners only set prescribed flames when weather conditions are right.

“We are making an intentional choice on when to burn and under what conditions to burn and where to burn,” said Porter, whose organization supported SB332. “And we've arranged ahead time for there to be suppression resources on hand in case things get a little bigger than expected, so the response to any situation like that is immediate.”

This planning also helps in handling other risks brought on by fire, Porter says, like increased smoke.

“We do a whole background analysis on atmospheric conditions and only burn at times when it's likely for the smoke from the prescribed fire to loft high up into the air and be dispersed,” Porter said. “And we do that to minimize impacts to people's health.”

Alongside the passage of this bill, $20 million has been set aside in the state budget toward a controlled burn insurance fund, which would aid burners in covering the costs of any damages from their fires. The goal of this fund is to make the prospect of controlled burns financially safer for burners and insurance agencies alike, Porter said.

Tucker sees these efforts as another way to unravel the stigma around controlled fire.

Before colonization, Tucker said that tribes in California were deeply familiar with the area’s climate and could safely conduct prescribed burns on thousands of acres of land every year. For the fire-adapted forests of California, there was nothing unusual about it.

“It was just this sort of acknowledgment that you can't stop a fire no more than you can stop earthquakes,” Tucker said. “They happen. You have to learn to live with them and learn to manage it.”