In the Wildland Urban Interface near Quincy, fuel reduction efforts include pile burning.

The federal government announced a $930 million investment on Wednesday that would go toward 11 at-risk areas located throughout the western U.S., in an effort to aid regions hard hit by wildfires. The at-risk areas include parts of California, Arizona, Oregon and eight other states. These states have also been heavily hit in recent years by massive wildfires, threatening landscapes and communities.

U.S. Secretary of Agriculture Tom Vilsack said this investment is part of the federal government’s 10-year wildfire crisis strategy, which was announced last January. At the time of that first announcement, ten areas were identified as “at-risk” for wildfire damage and received similar funding.

The efforts will be funded by federal legislation: the Bipartisan Infrastructure Law and the Inflation Reduction Act, both of which were passed last year. Vilsack said the money will go toward the front-end in addressing wildfire risk, including efforts like fuels reduction and the development of technologies that help boost efficiency of forest treatment plans.

Among the projects selected to receive these funds is Plumas Community Protection. Chris Carlton, forest supervisor of the Plumas National Forest, said the area is particularly vulnerable due to wildfires that have hit it in the past few years, like the massive Dixie Fire in 2021. He said about 65% of the forest has been hit by wildfires, impacting communities in the area as well. 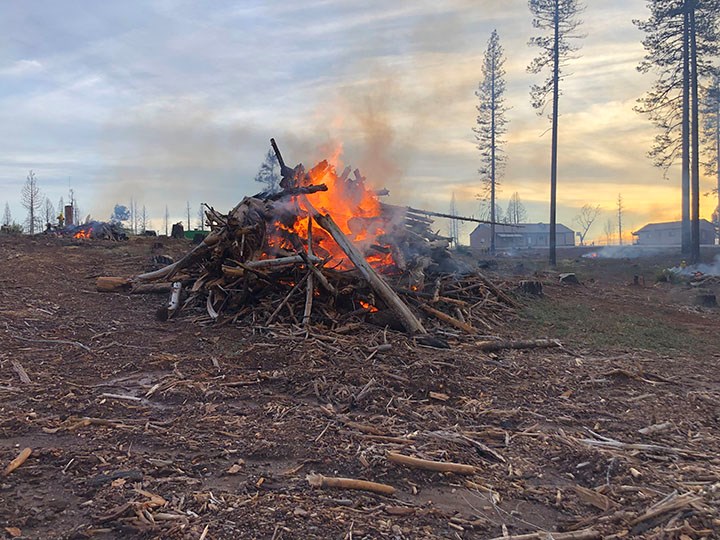 “Two of our last three years of major wildfires have resulted in civilian fatalities,” Carlton said. “The risk is very real. We see it and we have to respond in a new and more aggressive way.”

Since the Dixie Fire, Carlton said efforts around wildfire mitigation have centered on three priorities. The first is protecting people living in the area who have not been hit by wildfires. The second is recovery, focusing both on landscapes and community areas.

“Recovery is maybe a little bit deeper than clearing and replanting or some of what we traditionally tend to think of,” he said “It's really community protection.”

Carlton said, for the U.S. Forest Service, some of the work moving forward includes reducing risks in the area, like removing hazardous roadside trees and working with community partners to identify other potential risks.

However, like many other areas receiving the funding, Carlton said this is only the beginning. The cost of mitigating wildfire damage, and preventing future devastation, is high. He added that getting enough personnel to do the work has also been a struggle.

“The reality is yeah, to treat tens or hundreds of thousands of acres over a reasonable period of time is a very expensive proposition,” he said. “Ultimately, the goal is to be able to get them to a place where [the funding] is used to maintain them through prescribed fire, through other tools, working with partners, but that's going to take a pretty heavy lift in a number of areas.”