Voters in Sacramento could be asked this fall to reshape how their city and county governments respond to the region’s homelessness crisis — including a proposal to ban unhoused people from living on public property — should two early stage initiatives qualify for the November ballot.

Paperwork was filed earlier this month for what proponents call the “Emergency Temporary Shelter and Enforcement Act of 2022.” The proposed measure would require the city of Sacramento to dramatically increase homeless shelter space, while also barring people from living in parks, on sidewalks or other public property once a designated shelter space is offered to them.

Daniel Conway, who was chief of staff to former Mayor Kevin Johnson and is spearheading the effort, said he hopes it can become a template for others to follow.

“We’re raising the bar on our local government in terms of what they have to do to maintain [public] spaces and care for people who need help the most,” he said.

After seeing Conway’s proposal, Sacramento County Supervisor Patrick Kennedy said he’s considering bringing a countywide initiative to the Board of Supervisors this spring to place on the November ballot.

Sacramento Mayor Darrell Steinberg, who brought forth to the city council last fall a similar plan, said he's encouraged by Conway's proposal and is interested in combining their efforts.

Still, the mayor said there are differences between his so-called “right to housing” plan and Conway's initiative.

Specifically, Steinberg’s plan calls for permanent affordable housing to be part of the solution, while the ballot proposal leaves that out. Additionally, the mayor and community advocates say they don’t want to impose criminal penalties on unhoused people, as Conway’s initiative would do.

If those can be worked out, Steinberg said he will ask the council to place a combined proposal on the city’s November ballot.

For several years, Steinberg has called for aggressive homeless reforms on the state and local level because he says, “the law should require government to act.”

Sacramento would be the first city and county in the state “to actually turn the law on its head and say what matters should be required,” he added.

Proponents of the local initiatives say there’s an urgent need to change a status quo that’s allowed homeless people and their tent encampments to become entrenched on public property for far too long.

“It’s time to do something bold about homelessness in Sacramento County,” Kennedy said.

Sacramento does not currently have enough housing or shelter beds to require homeless people to move from public property, unless there is an immediate safety hazard or work is being performed on critical infrastructure.

Local governments cannot arrest or cite people for sleeping on the street or force them to move without first offering them shelter, the result of a 2018 federal court ruling.

Jenna Abbott, executive director of the River District Business Association, said she expects the ballot proposals will draw strong support from Sacramentans who want the city and county to create alternatives to the encampments that line their streets.

“The general public is feeling as if they are not being heard. Their neighborhood and the businesses that they patronize are being impacted,” Abbott said. “I hear that everyday. I think the general feeling is things are not moving along fast enough.”

Here’s a look at the status of the proposals and what they would do.

Conway, who filed paperwork on Feb. 8, said he expects to gather signatures once the city produces a title and summary, which could take two weeks from the time he filed. He estimated he’ll need about 40,000 signatures by mid-May.

He said he brought the initiative forward because Sacramento’s homelessness crisis “has been front and center in our community for several years now.”

“Unfortunately, as we can all see, the situation has only gotten worse for both the unhoused residents as well as the housed residents,” said Conway, now a policy advisor for the nonprofit LA Alliance for Human Rights. “We’re seeing more tragic stories in the media by the day, and I think people have lost patience.”

If approved, the initiative would require Sacramento’s city manager to authorize plans for shelter beds or “safe ground” camping and parking spaces for at least 75% of the city’s homeless population, based on the most recent federally mandated “point-in-time” count. That means it will use data from the count set to take place Feb. 23-24, the first in three years. It would also require approvals for several thousand new shelter spaces. 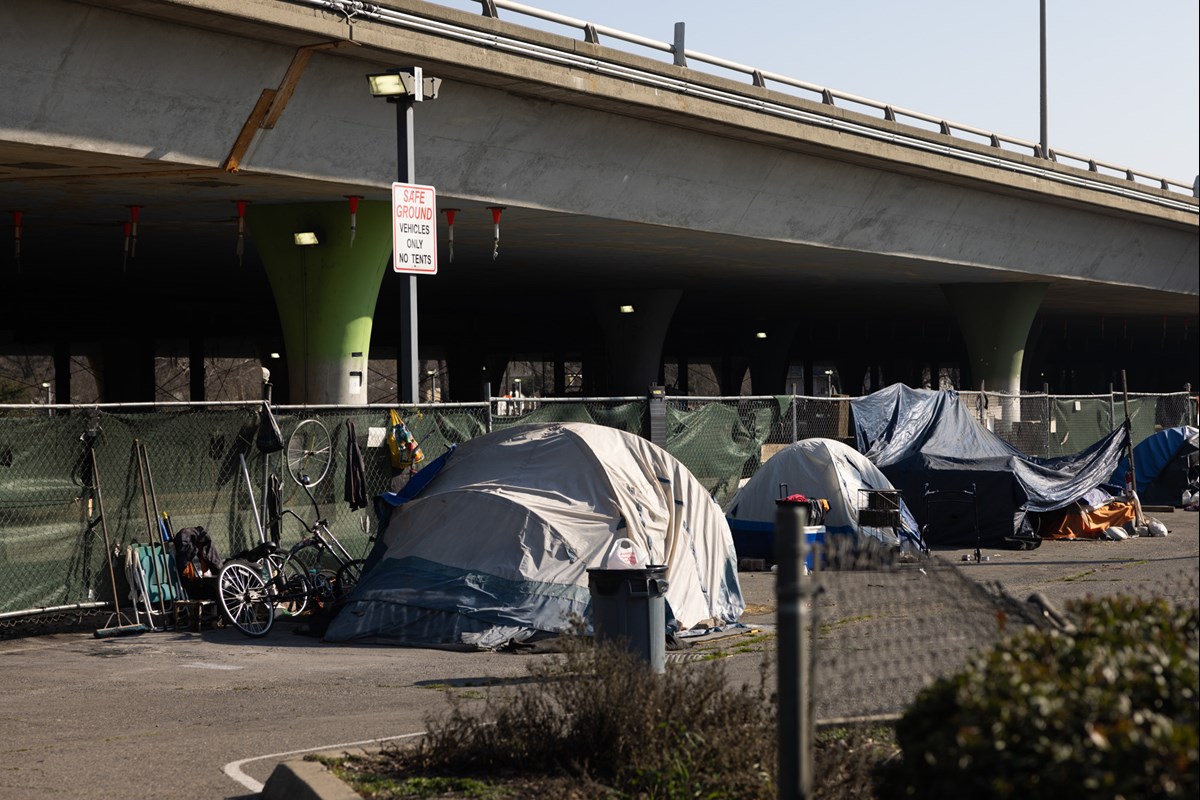 The last point-in-time survey found approximately 5,500 homeless people in Sacramento County in 2019, most of whom lived within city limits. Homeless advocates and government officials expect the new survey will find significantly more unhoused people due to the area’s continued high housing costs and economic effects of the pandemic.

Bob Erlenbusch, executive director of the Sacramento Regional Coalition to End Homelessness, said it’s “wildly unrealistic” that the city could authorize the amount of shelter space required by the initiative, given the slow pace it’s shown so far.

Erlenbusch says he understands the rationale for the shelter requirement for the city, “but that’s just not going to happen. This is a recipe for a legal nightmare. Citizens can sue the city for not doing it.”

Community advocates say that’s not their only concern. They also oppose language in the measure that would make it a criminal misdemeanor for anyone to camp on public property, except for areas “designated as an emergency shelter or camping site.”

Faye Wilson Kennedy, co-chairperson of the nonprofit Sacramento Poor People’s Campaign, said a criminal record would only make it more difficult for an unhoused person to get a job or be accepted into housing.

“Why are we punishing people?” she added. “I think we need to move from penalizing the poorest of the poorest.”

Steinberg said he planned to meet with Conway soon to discuss combining the measure with his right-to-housing plan. The mayor’s plan calls for not only requiring the city to approve more shelter space, but also obligating unhoused people to accept that space once two options are offered.

Conway’s plan would require the city to offer only one option. If a person refuses, it would be considered unlawful to continue camping where they are.

Both Steinberg and Conway said they would prohibit law enforcement from forcing people to accept shelter. Instead, a team of social workers would offer services and shelter.

Steinberg brought his proposed right-to-housing ordinance to City Council in November. Under his plan, the city would be required to create enough housing units or temporary shelter spaces by Jan. 1, 2023 before obligating unhoused people to accept shelter when given at least two options.

Council members weren’t completely sold and raised questions including whether the city could realistically approve enough shelter or housing in time and whether the city would be sued if it failed to do so.

Council member Katie Valenzuela raised concerns that the plan relied on shelter instead of housing. “It’s a solution for now, but the goal has to be housing,” she said.

Mary Lynne Vellinga, a spokesperson for the mayor, said last month the proposal was undergoing a legal review, though no date had been set for its next hearing.

Language for the countywide ballot measure proposal has yet to be drafted, Supervisor Kennedy said last week, though he expects it will be similar to the one Conway proposed.

Kennedy said he’s looking “for something we can do to light a fire under the county.”

“We’ve got some really great programs coming online at the county, including a fair number of permanent supportive housing, but that’s going to take a while,” he said. “You can’t build that overnight.”

“A city-only ordinance — even my own ordinance — is limited and arguably incomplete,” Steinberg said. “The city cannot do any of this on its own. We do not provide mental health and substance abuse services. If we’re going to really deal with the living conditions of people in these encampments and what brought them to the encampments in the first place, it’s not just shelter and it’s not just safe ground. It’s also mental health and substance abuse services in many cases.”

Kennedy said he expects to ask his fellow supervisors in April to place a measure on the countywide ballot.

Conway and Steinberg said they both support the county proposal, adding it’s critical the two local governments combine efforts and create consistency in the law across the region.