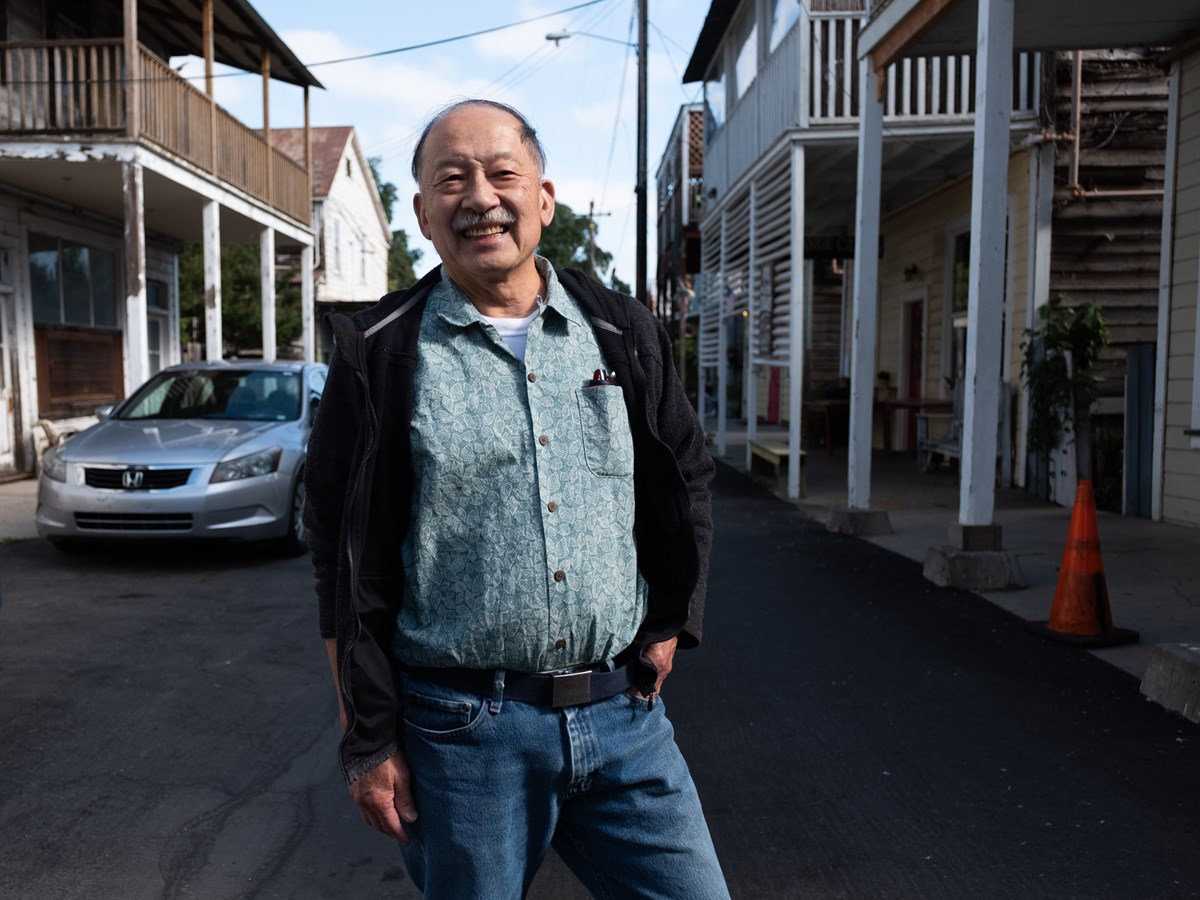 If it weren’t for Darwin Kan’s family, the town of Locke might not exist.

As he walks through the one-road Delta town about a half-hour south of Sacramento, he points out a few family landmarks: the Moon Cafe, where his father was born; his family’s old ranch-style home, with roses planted by his grandmother outside. Kan is a descendent of the unofficial mayor and founder of this former Chinese agricultural town.

“Their front door was always open, and there was always food cooking,” Kan recalled. “You know how Chinese go. They never say, ‘So, how you been?’ The Cantonese would say, ‘Have you eaten yet?’”

Today, there are only remnants of Locke from a century ago, when Kan’s grandfather Lee Bing struck a deal for a group of Chinese laborers to lease the land from its white owner. It remains mostly as a tourist destination where visitors can see Cantonese-style buildings. But there are very few actual Chinese Americans living there now.

Historically, Locke was somewhat unique. It was an entirely Chinese town, built by and for Chinese Americans and their families, who were farmers or laborers.

At the same time, it also shows how modern Asian American ethnic enclaves could end up.

Experts say that Locke has gone through all the stages of a former cultural hub, from its heyday as a place of belonging to a ghost town when the children of its residents move on and assimilate. This movement is something that places like Little Saigon in Sacramento and Chinatown in San Francisco grapple with today, as younger people leave these neighborhoods to pursue better opportunities elsewhere.

When these places vanish due to assimilation, experts say it can create a sense of loss for Asian Americans and their identity.

“What's the impact of the second-, third-generation becoming professional and starting to live ‘white’ in the burbs? They lose that self identity, they lose a piece of themselves,” explained Andrew Leong, an Asian American studies professor at the University of Massachusetts Boston.

‘Locke Is A Chinese Town’ 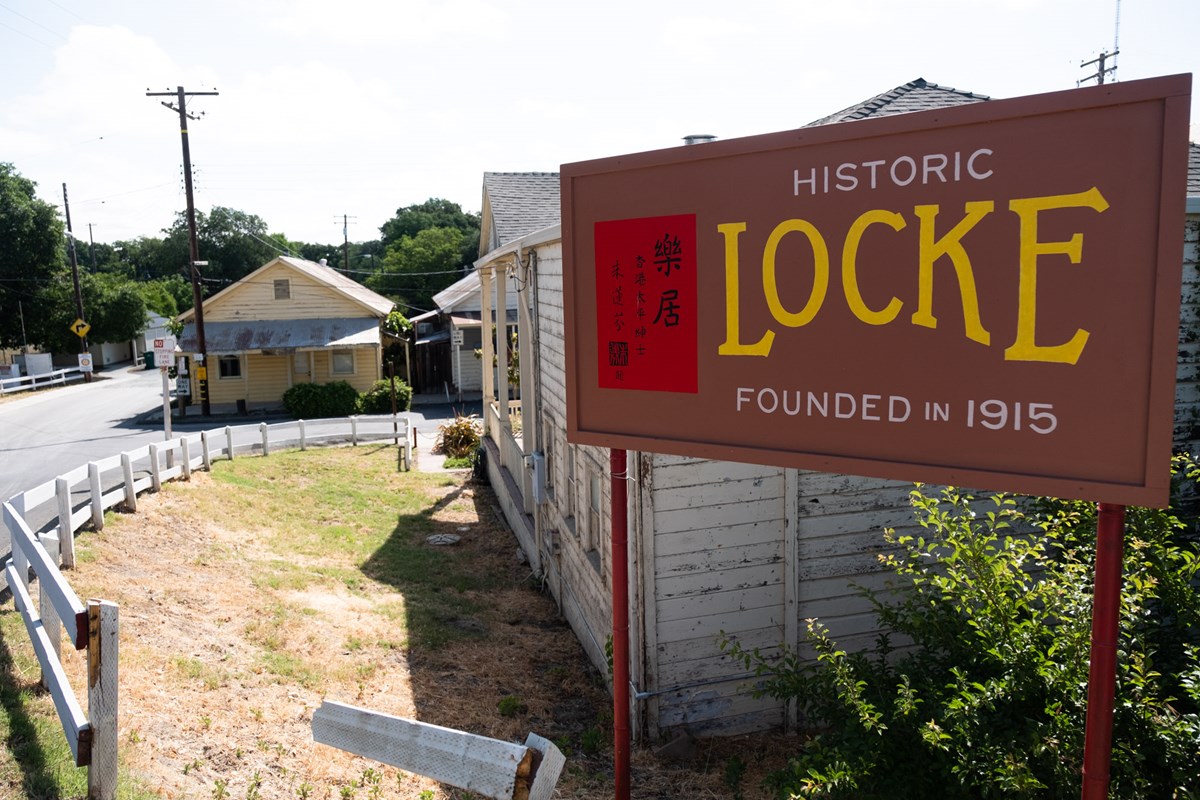 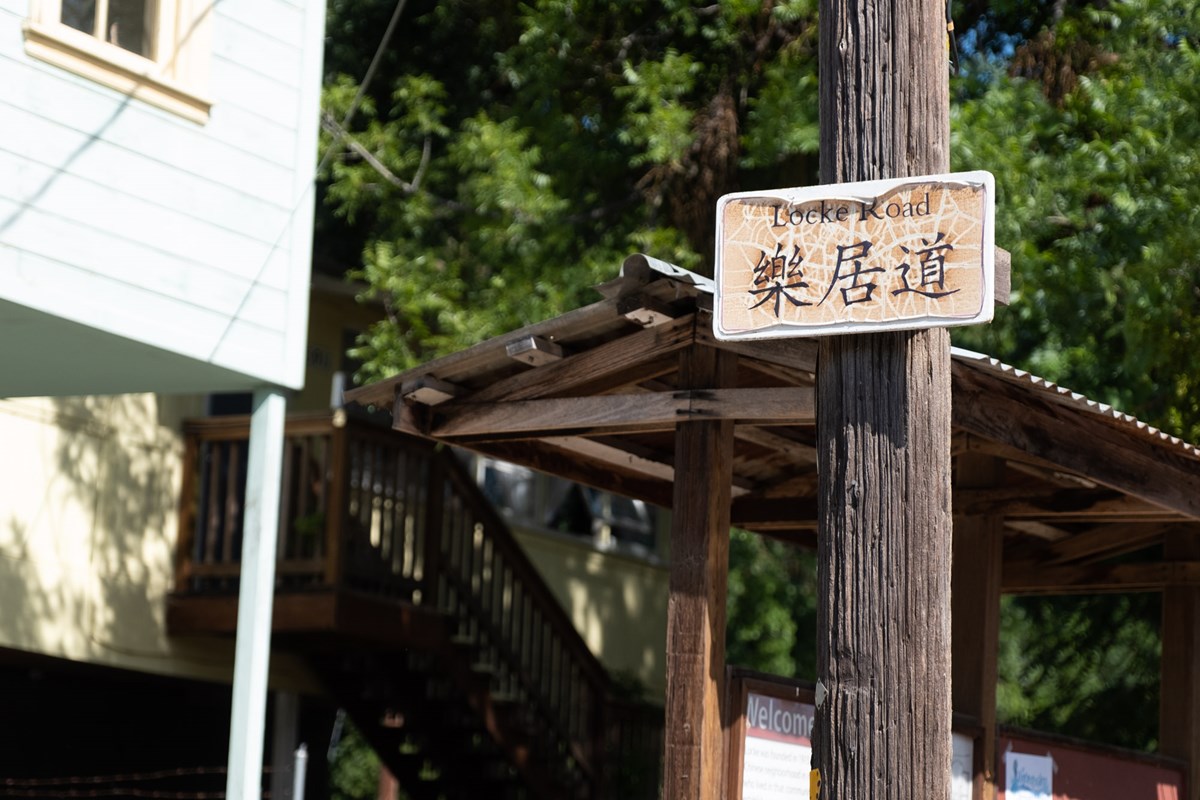 “Hey, let's differentiate right there between Chinatown and Chinese town. Chinatowns are hooked onto other towns. And they become part of the town, usually segregated,” said Locke historian Stuart Walthall. “Whereas Locke is a Chinese town. It's completely separated. It's a stand-alone town.”

Locke was established in 1915, after a group of Chinese laborers were displaced by a fire that tore through the nearby town of Walnut Grove. Kan’s grandfather was one of the only people who could speak English, and after the fire destroyed his home, he spoke with the owner of Locke, Alex Brown. He asked if they would lease the land to him and a group of other farmworkers.

“And when it burned down, he told Alex, ‘I want to move up there to the Locke ranch and build a town,’” Kan said.

Back during its peak, as many as 1,500 people lived in Locke. There was a cafe, a grocery store and a Chinese school. Now, less than 80 people remain, and most of the Chinese residents and their descendents have left the town for better jobs or higher education, never to return. 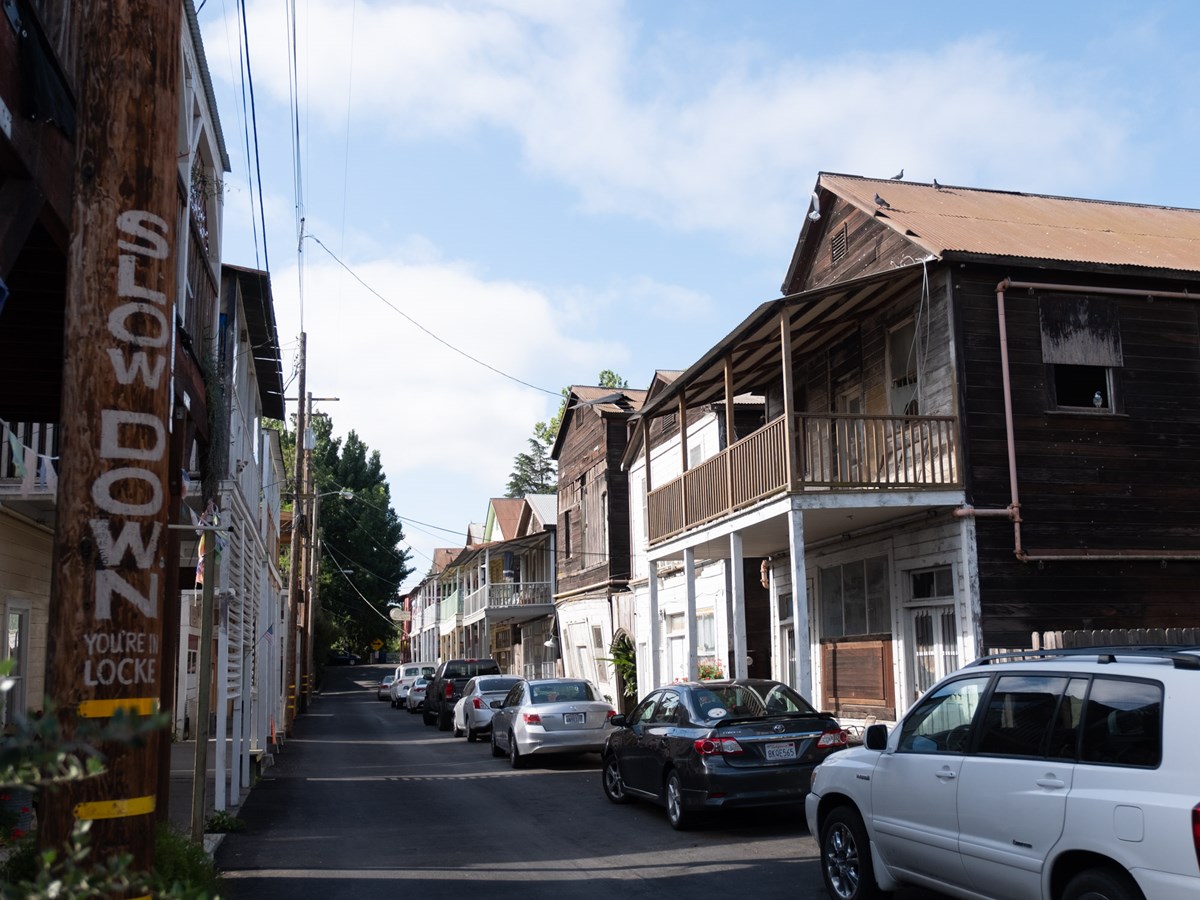 Jonathan Lee, a professor of Asian American studies at San Francisco State University, says there have been many towns like Locke in the past, and there continue to be places like it. He says no one wants to stay segregated, and because these ethnic enclaves often have fewer resources, most residents want their children to achieve the American Dream and leave.

“I think the narrative is … you become successful and move out, if not you, for sure, your kids, and that is the narrative that I think is universal to all BIPOC communities,” Lee said.

But Lee says there is a cultural trade off that happens when generations turn-over.

“Thai towns, Japantown, Little Korea — you name it,” Lee said. “The cultural aspect, I think, is more complicated. Then the question is, do they have to stay in order for it to maintain its cultural significance or historical significance?”

Many other towns in California have been less fortunate in terms of historic preservation. Hanford or Cambria in Southern California, which once had vibrant Chinese American communities, have essentially disappeared when their children achieved more and moved on.

“If you go there [Hanford] today, you would not know,” Lee said of the Central Valley town. “But for the fact that there's an alley that still has the kind of Chinese architectural design that's there, and then a plaque that says historical landmark.”

He adds that oftentimes, the danger in moving on is that we risk history being erased.

“If we just don't know that the Chinese were in Locke and and they raised their family there and and lived lives as Americans there, we just assume that they just came off the airplane or fresh off the boat,” he said. “And and and so that allows for the continued kind of racialization, xenophobia, the perpetual foreigner kind of stereotype.”

This racialization is something that’s come to the surface as recently as this past year, when attacks on Asian Americans have been on the rise, in part because Asians are stereotypically seen as being “un-American.”

The idea of Asian Americans as perpetual foreigners is so pervasive that experts describe the community as inhabiting a space in between the privilege of white people and Black people, but off to the side, as constantly considered un-American. This is why many insist acknowledging the history and contributions of the Chinese to the formation of California as we know it is important.

‘A Sense Of Pride In What The Chinese Were All About’

Corliss Lee is working to remind people of this history.

“We couldn't own the land, but we had the know-how. We came over from China already with the knowledge of how to develop levees and how to farm the land,” the former Locke resident said. 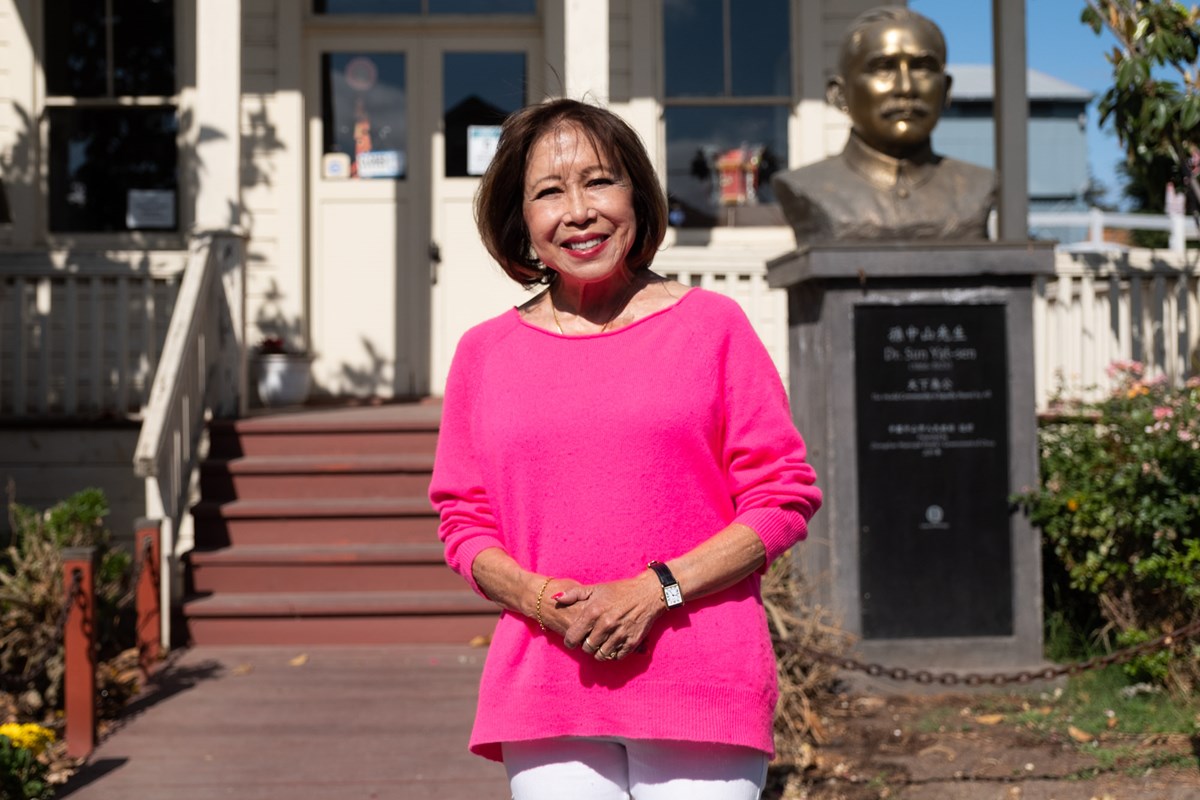 She added that she doesn’t think California could have established itself as an agricultural hub without the work of Chinese Americans like those in Locke.

But Lee also describes her feelings about the town as complicated. On the one hand, she has fond memories of living in an all-Chinese enclave, and how it nurtured pride in being Chinese American.

“The thing is, with my aunts and my uncles, they were all raised with the concept of a sense of self-worth. I think it's because Locke was just a Chinese community,” Lee said. “They didn't have to really involve themselves with the white community, and so they never had to have the feeling of being inferior to the whites.”

But life wasn’t easy in Locke, she says. None of the Chinese American residents who lived there owned land; it was illegal back then. She says there was a great sense of frustration among many in the community at the poverty and the lack of control they had over their lives.

“I think most of us just wanted to get out. So many of the people, like my sister, they don't want to tell their stories because life was so difficult,” Lee said.

She ended up leaving, going to college and living in the Bay Area. But she’s since returned to live in the nearby town of Walnut Grove to help preserve Locke’s history.

“I thought I left this place. I don't need to go back. I don't need to remember all the things that happened. And it's still hard on me, but I've made a commitment and I'm staying,” Lee said.

She believes it’s important to help tell the stories of former residents whenever she can.

“I think it's a good thing for other people to know, because then they can have a sense of pride in what the Chinese were all about, and how we move forward from there,” she said.