Linda Lui is President of the Indochina Friendship Association Buddhist Temple where she helps distribute masks and food regularly.

On a recent Friday afternoon, Linda Lui hands out steamed rice and mung beans to people in a  long line of cars outside the IndoChina Friendship Association Buddist Temple on Stockton Boulevard.

Lui grew up in Sacramento’s Vietnamese American neighborhood known as Little Saigon, and has been involved with this Buddhist Temple since she was a young child. Now, she’s the president, and has been working to give out free food and face masks to community members since the start of the pandemic. But many of the volunteers and those involved in the Temple’s efforts are aging or elderly — Lui said this is in part because many of the younger families in this neighborhood have moved away to suburbs like Elk Grove.

“The younger generation are getting more educated, moving on to colleges, getting jobs where they went to college,” Lui said.

The two-mile stretch of South Asian businesses on Stockton Boulevard between Fruitridge and Florin Road was once a landing place for Vietnamese immigrants fleeing war in the 1970s and ’80s. But the migration of their children out of the neighborhood — to achieve perceived safety and economic success elsewhere — is forcing the community to redefine itself and grapple with new challenges. 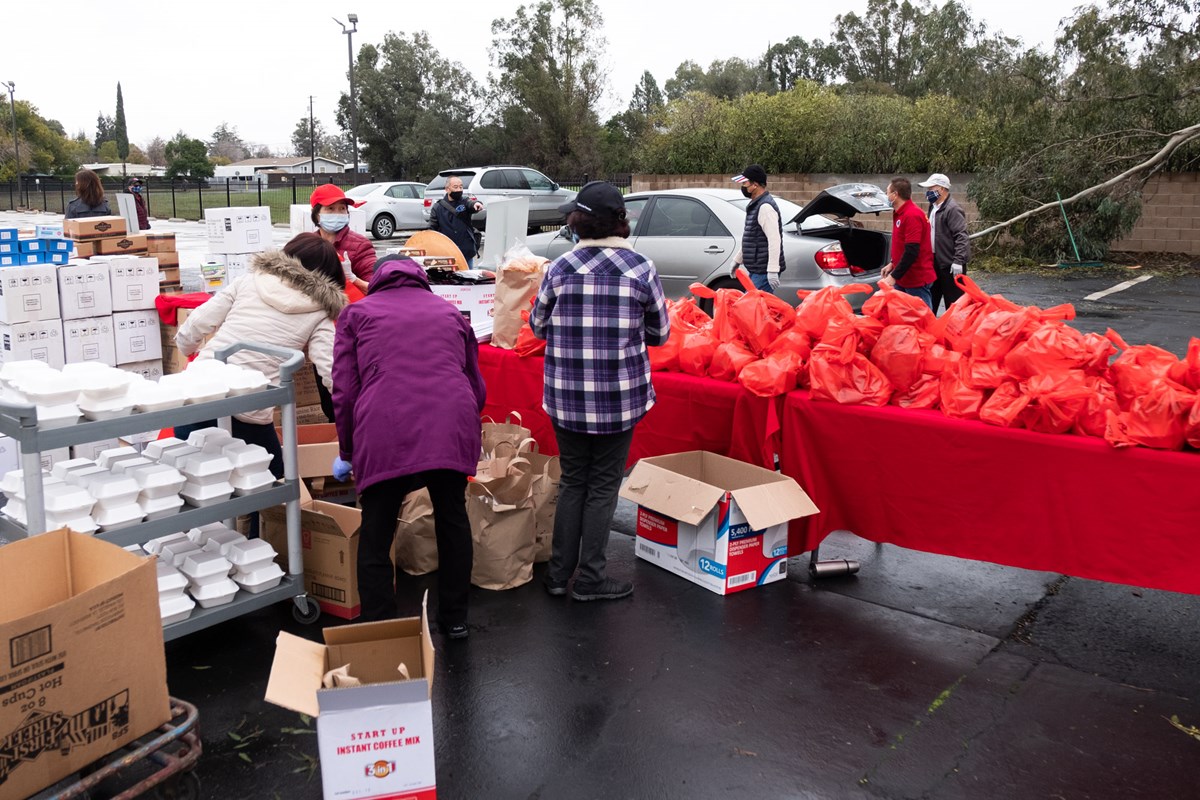 And it’s a trend Lui expects will continue.

“If I tell you it doesn’t worry me, I would be lying,” she said.

During the pandemic, Lui says she’s noticed an influx of unhoused people camping along the Boulevard. Job loss has been increasing, and so has crime in the area, she says. Widespread financial troubles have reversed the economic progress Little Saigon had achieved before the pandemic.

“It took a long time for that cleaning up process to take place,” Lui said about the improved look of Stockton Boulevard. Lately, she said of the demographic shifts and economic decline, “it has saddened me.”

“It Was Like A Wave” — How Little Saigon Came To Be

February marks 11 years since Little Saigon officially received a designation as a neighborhood. But its history as a cultural hub for the Vietnamese community started 40 years ago.

Immigrants came to the area because it was a cheap place to live. 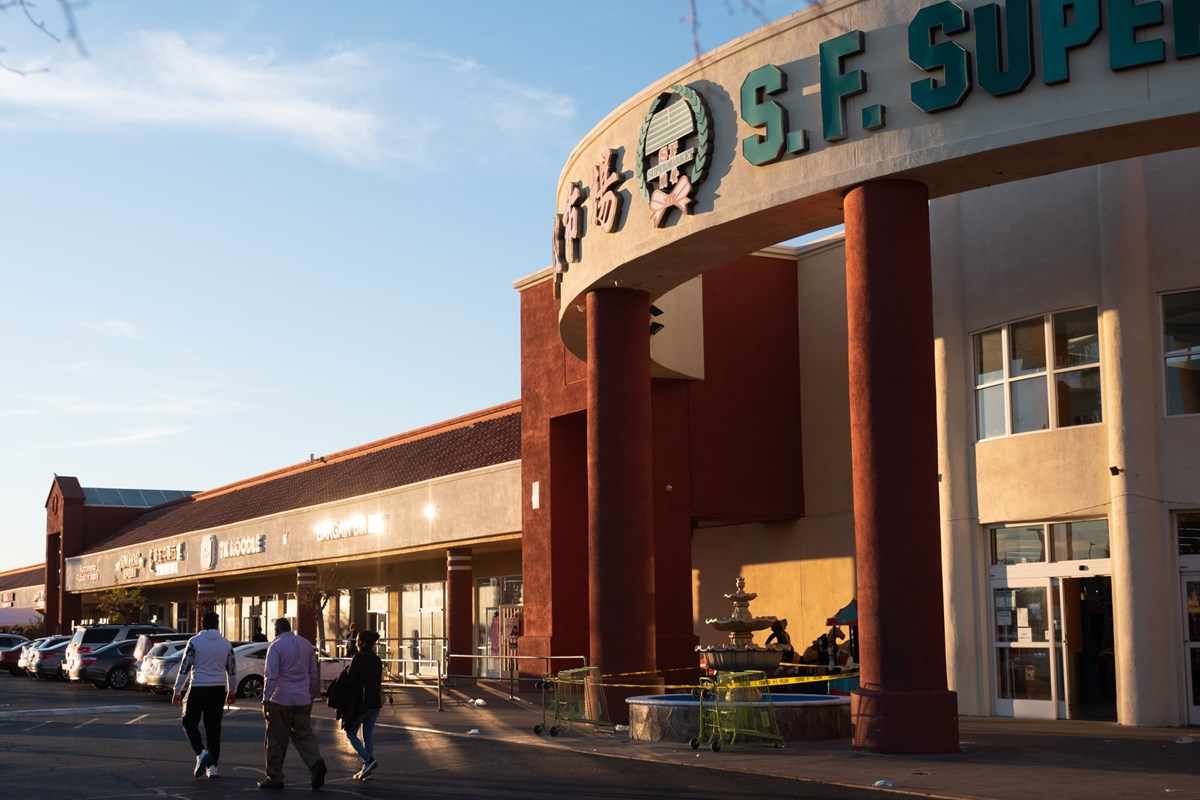 The shopping centers around 65th Street and Stockton Blvd are in the heart of Sacramento's Little Saigon.Andrew Nixon / CapRadio

But the newcomers were enterprising, and many opened stores and businesses catering to the Vietnamese American population that lived in the apartment complexes around the boulevard.

“It was like a wave,” Mai Nguyen, president of the Community Partners Advocate of Little Saigon Sacramento (CPALSS) said. She believes the seed for Vietnamese businesses really began in the Pacific Rim Plaza at 65th Street and Stockton Boulevard. “And then more small, small, small mom and pop shops came in, and then grocery stores came in, and then more restaurants came in.”

In 2010, the community came together with the help of then-Councilmember Kevin McCarty, and petitioned City Council to officially name the area Little Saigon. Hoang remembers the moment fondly.

“It’s a testimony to the hard work and the transformation that the community has done to change this area into something that we felt proud of, our home,” Hoang said. “A place where no one really wanted to come 20 years ago, or even 30 years ago.”

A Corridor Kneecapped By COVID-19

On Feb. 12, local residents celebrate Tet, the Vietnamese Lunar New Year. This is the Year of the Ox, meaning 12 months of hard work, progress and movement forward. In many ways, the ox is also a symbol of the Little Saigon neighborhood and the changes that may be in store.

This year, New Year celebrations will be quieter because of the pandemic. There won’t be the annual Tet parade at the corner of Stockton Boulevard and Fruitridge Road. Nor will there be lion dance celebrations going inside local businesses to bless them.

Linda Park grew up along Stockton Boulevard but, like many other children of immigrants in Little Saigon, she has since moved to one of Sacramento County’s many suburban cities to raise her kids. She says the Tet celebrations are what she missed most about living in the neighborhood.

“So at midnight on the first night of Tet, you hear firecrackers just everywhere, including my house, and it was like one of my favorite memories and I loved it,” Park said. “Our whole walkway was covered in those little red firecrackers, and it was like Christmas lights.” 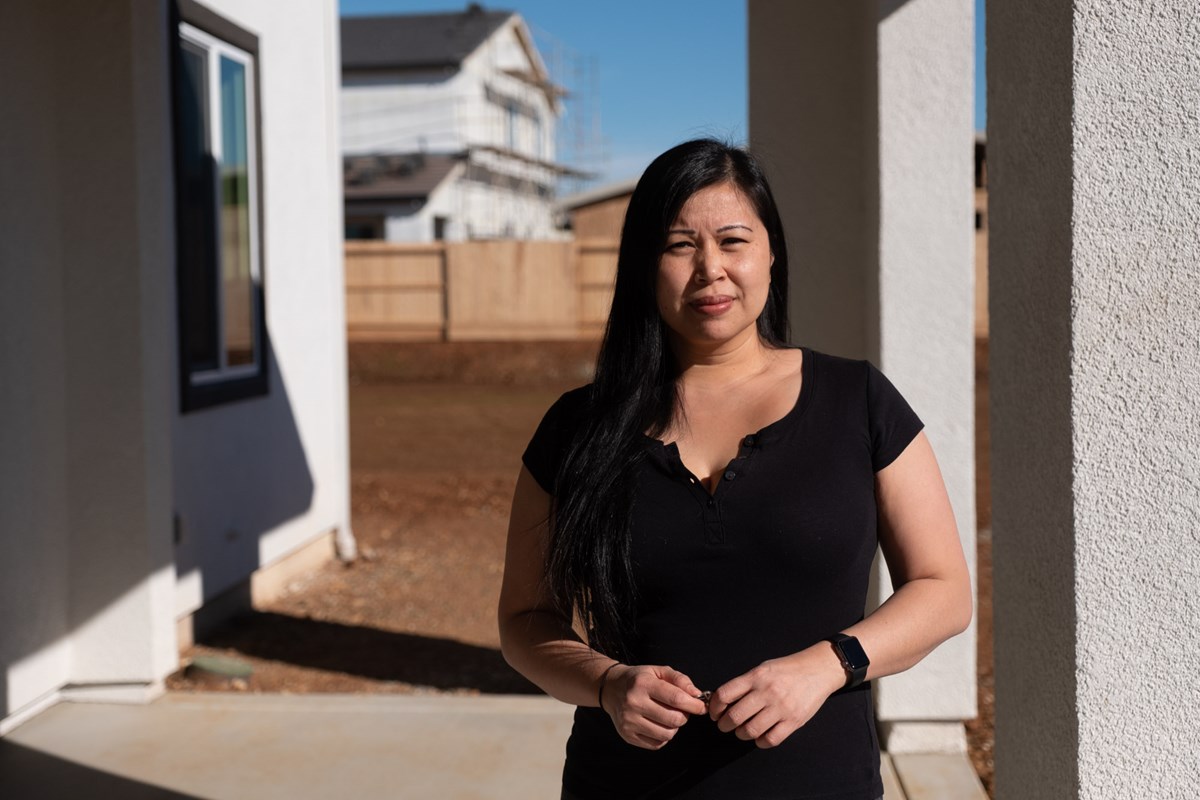 Linda Park grew up near Little Saigon in Sacramento, and has since moved to Elk Grove and most recently Rancho Cordova to raise her children.Andrew Nixon / CapRadio

Park says it was meaningful for her to grow up around people who were like-minded and “grew up eating the same things.” But she said crime and low performing schools in South Sacramento brought her to the suburbs.

But she still brings her kids to the area to visit Vietnamese restaurants.

“I think it’s more like a destination now, like we’ll go there to do things,” Park said. “I don’t see it as home anymore. Sometimes I feel a little disconnected.”

Businesses in the area have suffered from pandemic-related closures, Mai Nguyen of CPALSS says. Out of the hundreds of businesses along the Boulevard, 15% are nail and health spas, and 30% are restaurants. Nguyen predicts about 25% of the neighborhood’s businesses could close permanently.

“When I [drive] through the Little Saigon district, I see a lot of empty offices,” Nguyen said.

When the COVID-19 pandemic hit, Little Saigon businesses were some of the first to see the impact. Some believe it was partially spurred by the racist rhetoric about Asian people spreading the virus, and many of the businesses experienced a downturn early.

“Since the pandemic hit and being that the virus came from China and us being in Little Saigon, we’re a high population of Asian business owners,” Nguyen said. “To some of the business owners they felt like they were a target for that. They noticed the number of customers decreased and this was back in February.”

In some ways, the boulevard is now coming up against the results of its own success. As the children of the immigrants who moved to this area get closer to achieving the “American dream,” the realization of this goal often takes them out of this neighborhood.

Andrew Leong is a professor at the University of Massachusetts Boston who studies Asian ethnic enclaves across the country. He said that this move outward from these neighborhoods is something that happens in almost every Asian enclave in the country.

“Growing out of — whether it's Chinatown, whether it’s Little Saigon — means the upward mobility into professional jobs and into the white suburbs in order to achieve the sensibility of whiteness,” Leong said. “So the transformation of that takes you out of the urban enclave and into whiteness in the burbs.”

One of those suburbs is Elk Grove. The city in the southern part of the county is actually one of Sacramento’s most diverse suburbs, and nearly a third of its residents are Asian American. But conceptually, Leong sees the suburbs as inherently a “white space” where preserving cultural heritage can be difficult.

He adds that the main concern with this generation growing up and out, is that it means fewer children will take over legacy businesses or take on the mantle of keeping the community alive. He said it’s typical for an enclave like Little Saigon to either become a “Disney-fied” version of itself — one that’s outward facing to cater to tourists — or it could slowly be taken over by a newer group of immigrants.

While it’s natural, he adds there is a loss to Asian American identity that happens when an enclave like this is lost.

“What's the impact of the second-, third-generation, becoming professional and starting to live ‘white’ in the burbs? They lose that self identity, they lose a piece of themselves,” Leong said. “The question that's often asked of me is, ‘Why do we need to save these ethnic enclaves, whether it’s Little Saigon, whether it’s [Japantown], whether it’s Koreatown?’ My answer is, it's about belonging. White people have their space already created by the government. That's called suburbia.”

What Is The Future Of Little Saigon?

The neighborhood may have changes on the horizon, and for other reasons aside from younger generations moving out. The city of Sacramento hopes to revitalize the Stockton Boulevard Corridor as an extension of its redevelopment efforts around Aggie Square, the $1.1 billion project that would expand the UC Davis Health campus at the northern end of Stockton Boulevard.

Neighborhoods like Oak Park have already seen some of the impacts of the looming billion-dollar project, and its residents are concerned about resulting gentrification.

“With input from the surrounding community, they will help to increase investment and utilization of the corridor, with a focus on equitable outcomes for existing residents and businesses,” Elizabeth Boyd, senior planner for the city of Sacramento said in a press release.

Tony Tranh, who owns Wonder Cafe at 65th Street and Stockton Boulevard, says his parents moved to Sacramento for the next generation.

“They came here mainly just for us — the kids,” Tranh said. “They feel it’s better for the second generation to grow up in America and have a better life.”

He said he doesn’t plan to pass his business down to his children and would encourage them to find a career doing something else. 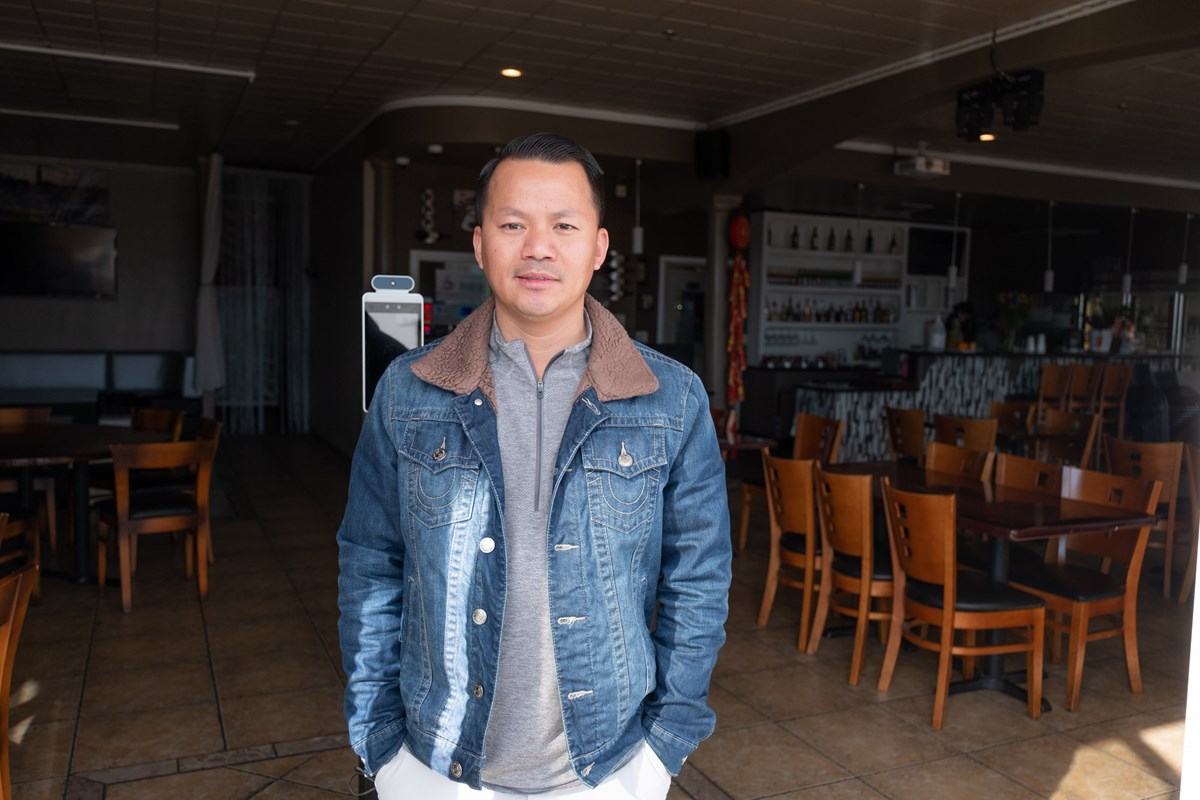 Meanwhile, Jeffrey Phung has lived his entire life along Stockton Boulevard in the Little Saigon neighborhood. He said he stays to take care of his aging parents, but he acknowledges the younger generation’s desire to move elsewhere.

“Well, most of the time they want more freedom, because South Sacramento is very small, it’s not an ideal environment for everybody,” Phung said. “The type of community we have in South Sacramento hasn’t really changed, the businesses are the same. It’s not made for people who want to do more with their lives and progress forward. It isn’t built for youth.”

Su Ying Plaskett is the co-owner Vinh Phat Supermarket, one of the flagship Vietnamese grocery stores in Little Saigon. For 40 years, it has sat at the corner of Lemon Hill Avenue and Stockton Boulevard, which is the at the far end of the soon-to-be revitalized corridor. 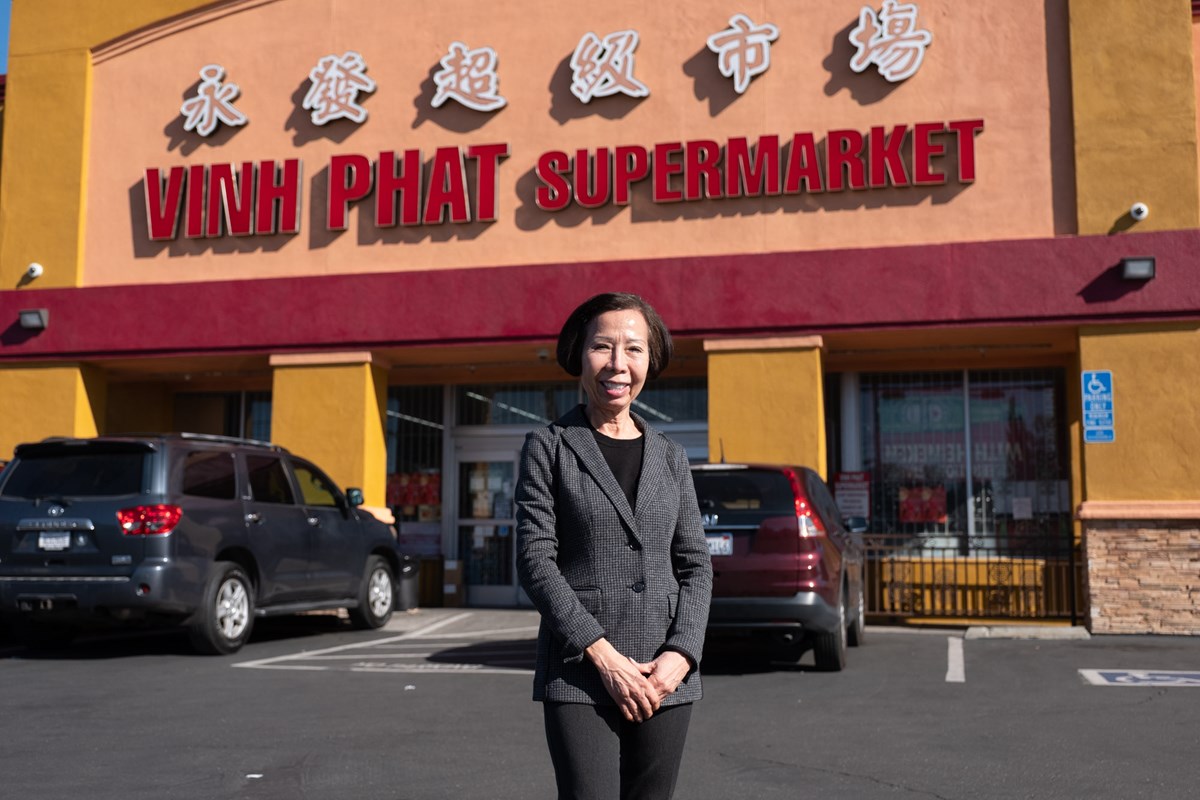 She opened her market as a way to provide employment for family members who weren’t able to get a job elsewhere because of their limited English skills.

But now, she’s looking at retiring. Initially, she said her son didn’t want to take over the business because he wanted to pursue a career in medicine.

She explained, “I say if you don’t take it over, I don’t have the heart to sell that thing.” Eventually, he relented. Soon, Plaskett will transition ownership and store duties to her son.

Plaskett knows the younger generation is moving out, but she believes this area will always mean something to Vietnamese Sacramentans.

“Hey, this area is No. 1,” she said. “No matter what, this is still Little Saigon — Little Saigon is located in Stockton Boulevard.”